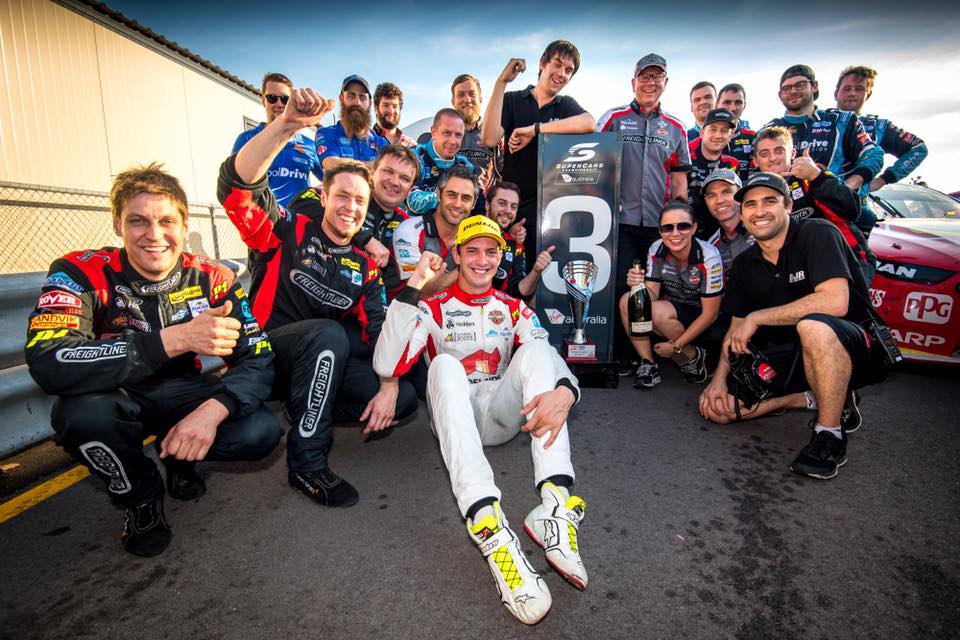 Nick Percat says that his first podium for Brad Jones Racing is the result of finally catching up on development delayed by a series of crashes at the start of the season.

Percat delivered on pre-season hype surrounding his move to BJR as he finished third behind Shell V-Power duo Fabian Coulthard and Scott McLaughlin at Hidden Valley.

BJR had run second and third at the time of the mid-race Safety Car restart before McLaughlin snuck through on Percat and Tim Slade, who quickly slid down to 11th.

Percat’s podium was the team’s first in 12 months and comes after a horror start to the year that included a series of heavy crashes.

The opening three events at Adelaide, Albert Park and Symmons Plains saw major incidents for its main and Super2 cars, headlined by Percat’s brake failure at the grand prix event.

“We went through two rounds without having written-off cars and crazy things going on, so we’ve actually been able to sit down and go through some data and look at the cars, implement some changes and I think that got us to the podium today,” said Percat.

“We didn’t test (between Winton and Hidden Valley) but we had a lot of information and a direction where we wanted to go and we’ve started that process.

“I think we’re probably two rounds behind where we should be because obviously when cars get damaged the way they have… and it wasn’t just the main game cars, it was Super2 cars, so there was a lot of workload at BJR. It wasn’t like we could suddenly make new parts when we were trying to get cars back together.

“It’s a credit to everyone back in Albury. They don’t get to enjoy the champagne, but the fab shop has been crazy busy, the paint shop’s been out of control, they all work just as hard as the guys that get to travel, so it’s a credit to what they’re doing and a credit to all those guys and girls that get to go away."

While big Super2 crashes at Symmons Plains were part of the drain on BJR’s resources, Percat was quick to point out that its second-tier team has helped turned the squad’s fortunes around.

BJR ran its Super2 cars at a test before Hidden Valley, while one of its second-tier drivers – Macauley Jones – is also racing in the main series at Winton and Hidden Valley as a wildcard.

“It’s actually helped a lot having Macauley as a fourth car this weekend and the stuff he’s been doing at Winton, because I think we try a few things on his car and he probably doesn’t get to enjoy the results we do but it works to be able to speed up development and a bit more data,” said Percat.