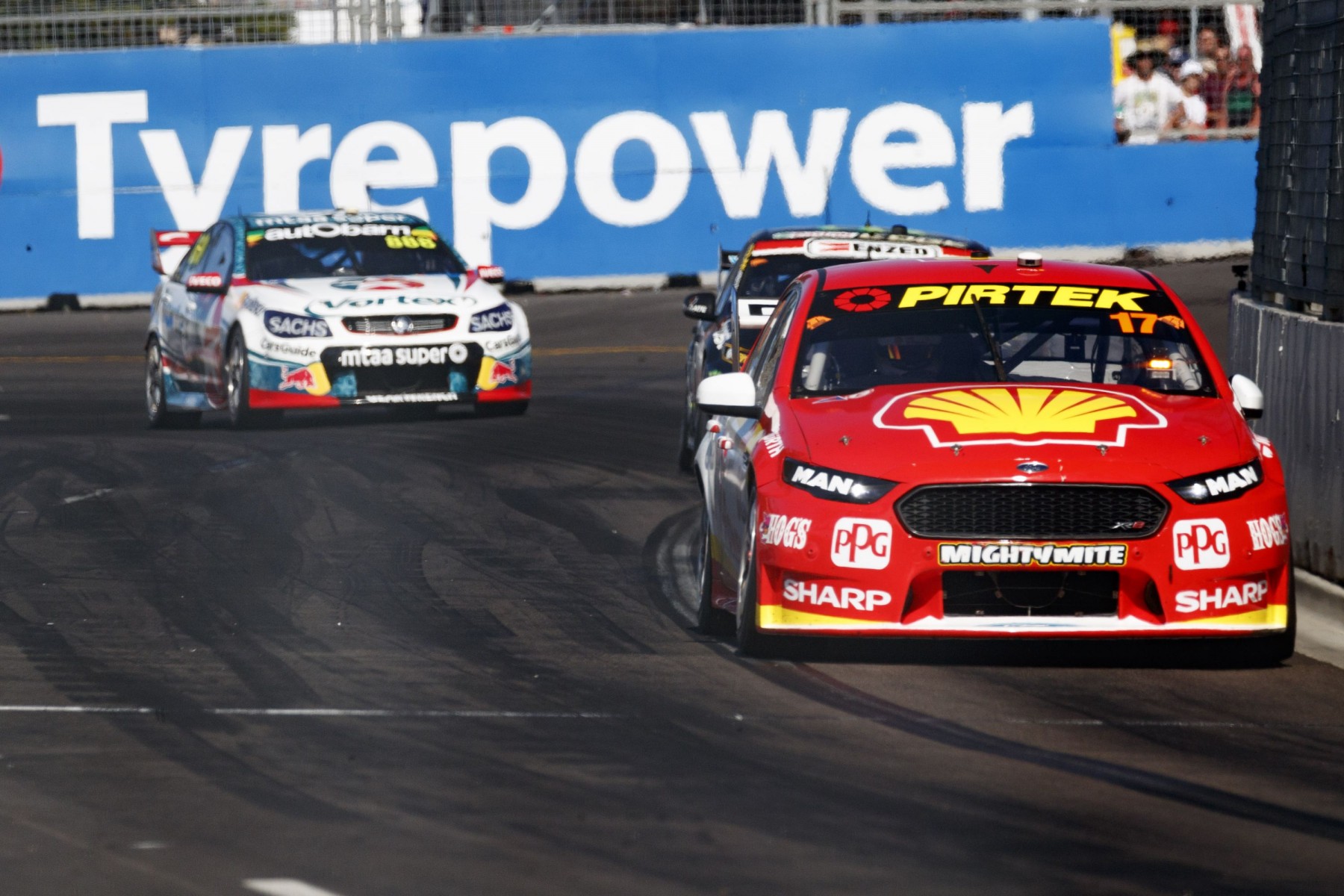 Supercars technical staff have agreed to meet with DJR Team Penske next week to review the pitlane speeding penalty levied to Scott McLaughlin in the Newcastle season finale.

A drive-through issued for speeding at pit entry during his first pitstop dropped McLaughlin from the race lead to outside the top 20.

While the race and championship results cannot be altered, the Shell team remains adamant that McLaughlin did not speed in pitlane.

The team has issued a statement today, complete with a page of data from McLaughlin’s car, detailing its case that McLaughlin did not speed.

“Although the results of the championship and the final race of the 2017 Virgin Australia Supercars Championship are official, DJR Team Penske is still working to understand why a penalty was issued to Scott McLaughlin at the Newcastle 500 for exceeding the pitlane speed limit during his first pit stop in Race 26, on Sunday November 26,” read the statement.

“According to the team’s analysis of multiple different data/video feeds, Scott didn’t exceed the 40 km/h speed limit at any point in pitlane.

“Members of Supercars technical staff have agreed to attend a meeting at the DJR Team Penske workshop on Monday, 11 December to review the incident with the team’s technical staff.

“Data retrieved from the car aligned to television footage of the car entering pitlane and the footage from the MoTeC VCS Judicial Camera (note: Judicial Camera footage cannot be publicly released without Supercars permission) has been analysed.

“Each analysis demonstrates McLaughlin’s car never exceeded the speed limit. In fact, when McLaughlin released the brake pedal prior to the pit entry line, the car was travelling at 33.5 km/h.

“Following entry, the car’s pit speed limiter brought the vehicle speed up to a steady 38.2 km/h without ever exceeding the prescribed 40 km/h limit.

“DJR Team Penske accepts that the outcome of the championship cannot be altered, but the team feels it has a responsibility to seek clarity and to ensure the methods used to enforce pitlane speed limits going forward are as accurate as possible for all competitors.”

Moments prior to McLaughlin’s penalty, team-mate Fabian Coulthard was stung for the same offence.

It was the third pit entry speed violation of the race, with Erebus Motorsport’s Dale Wood also serving a drive-through for the same infringement in the early stages.

As part of its statement, DJR Team Penske released the following images with the below caption:

The television footage shows Car #17 with the pit limiter engaged, on the brake pedal, then off it prior to the pit entry line, which provides a current spike in amperage in the car’s data from the brake light which can be used as a geographical marker in lieu of a beacon.

When the driver releases the brake pedal, prior to the pit entry line, the car is travelling at 33.5 km/h.

Following entry, the pit speed limiter in the car brings the vehicle speed to a steady 38.2 km/h, at no point exceeding the prescribed 40 km/h limit. 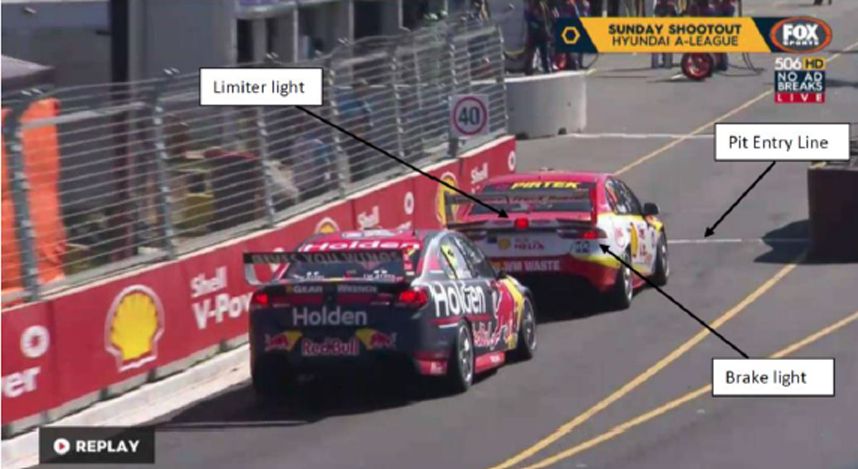 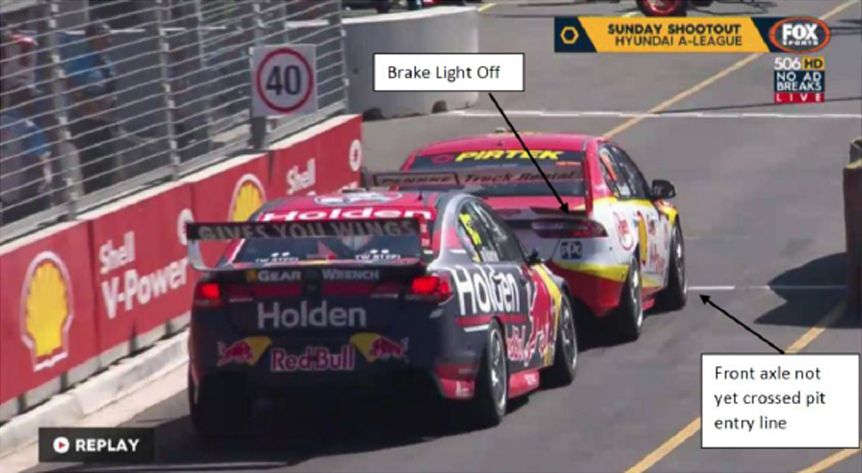 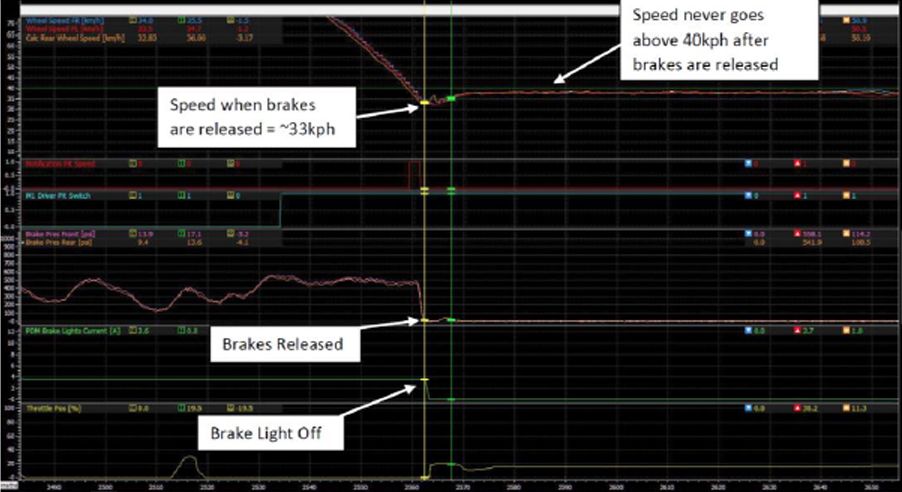