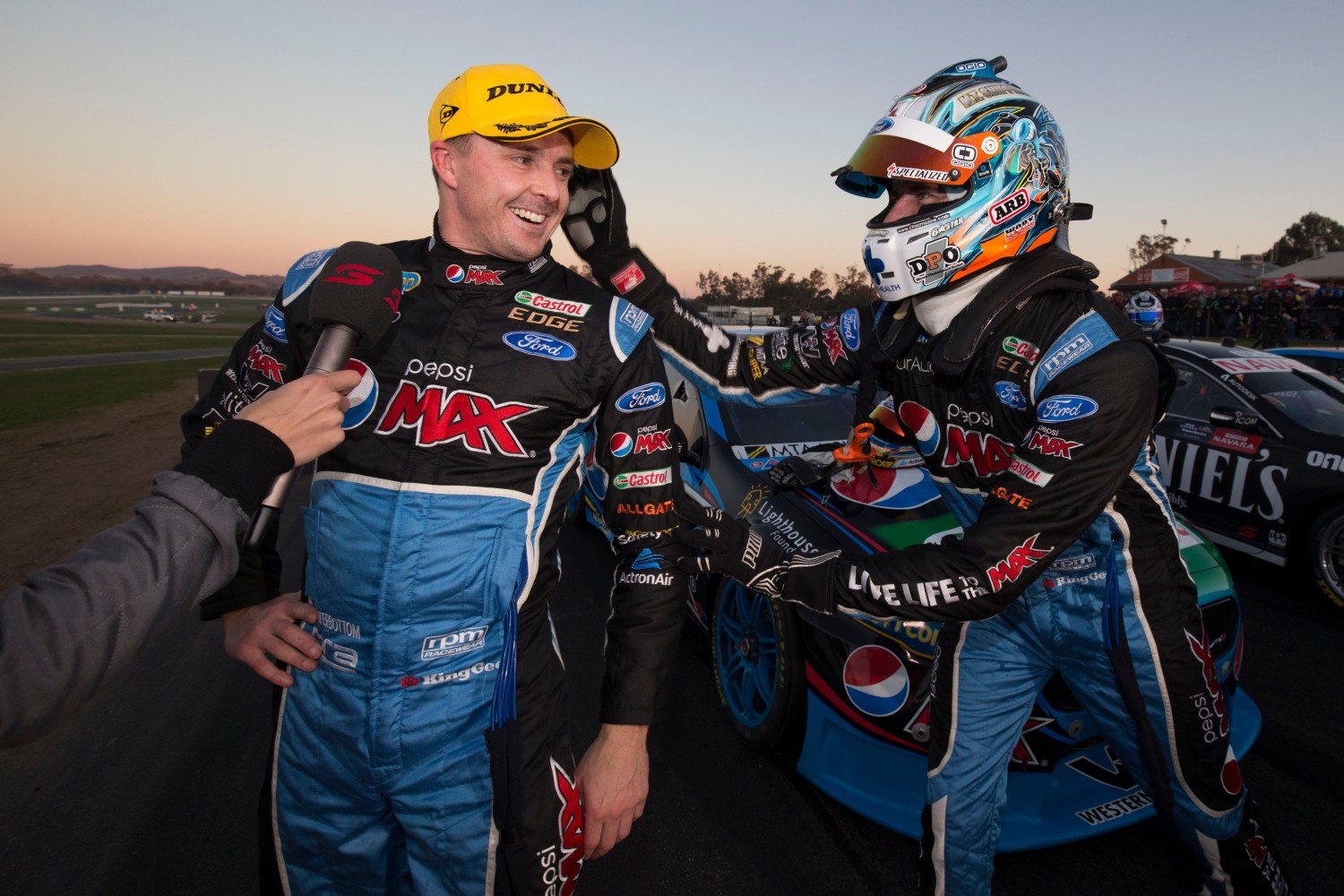 The next venue of the 2021 Repco Supercars Championship has been a happy hunting ground for Mark Winterbottom.

No active driver has more wins at Winton Motor Raceway than Winterbottom, whose four victories are matched by Jamie Whincup.

Whincup and Red Bull Ampol Racing don’t have an affinity with the rural Victorian circuit; he hasn’t won there since 2012, and the team since 2017 through Shane van Gisbergen.

It was in 2015, though, that he performed perhaps one of his, and his then team’s best performances. 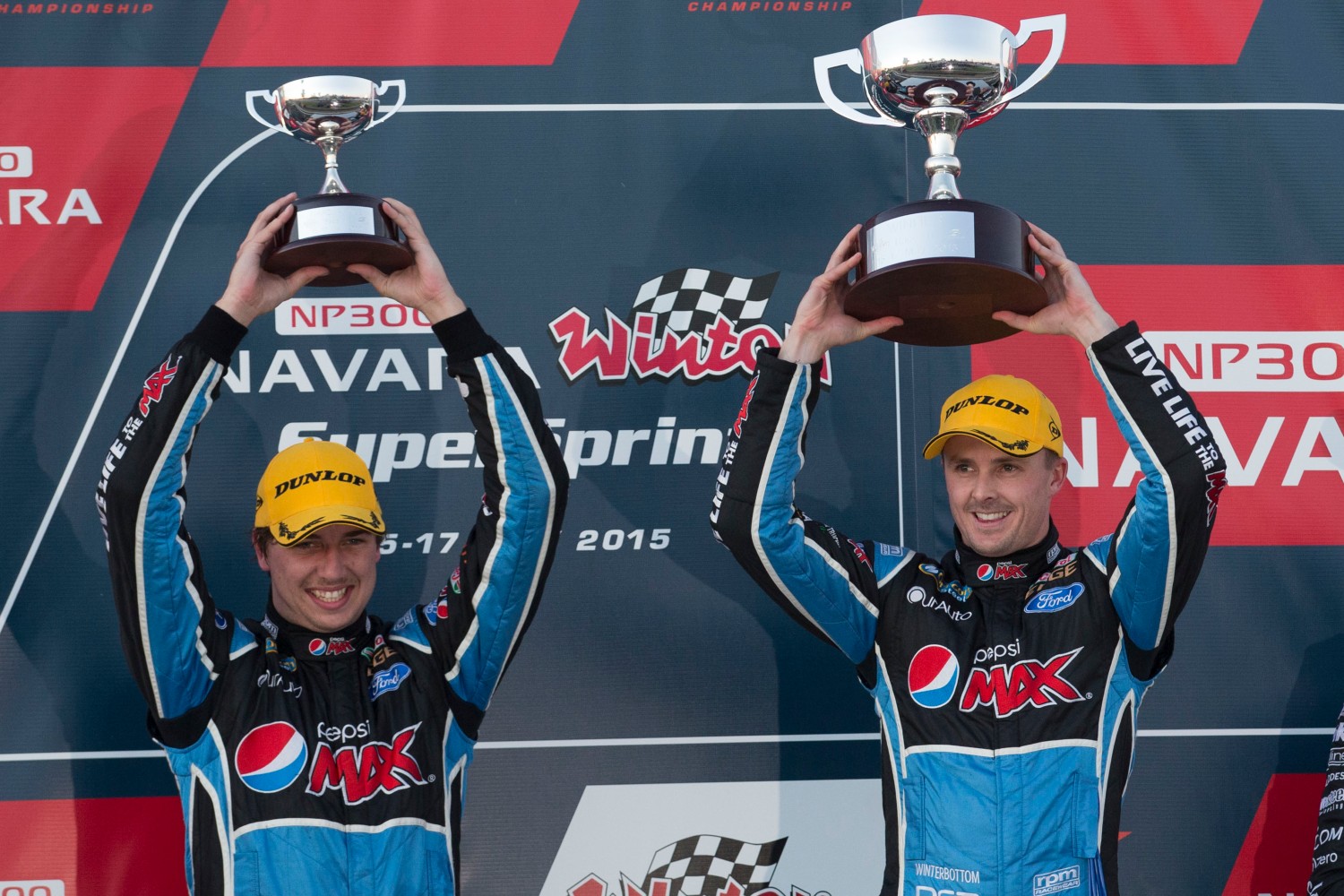 He won nine races that season, first hitting the top at the previous event in Perth.

While Perth was strong, Winton was a key turning point; from the fourth round at Winton to the ninth round at Sandown, Prodrive cars won 13 of 15 races.

Winterbottom was responsible for seven of them, including the Sandown enduro, which was his last of the season.

Chaz Mostert loomed as Winterbottom’s biggest threat in 2015, and continued his form with both Saturday poles on May 16.

Mostert stayed at the front of the field to take his first race win of the year, with Winterbottom vaulting from fourth to second to seal a Prodrive one-two.

Winterbottom returned serve in the afternoon race, pinching the lead from Mostert at the first corner. 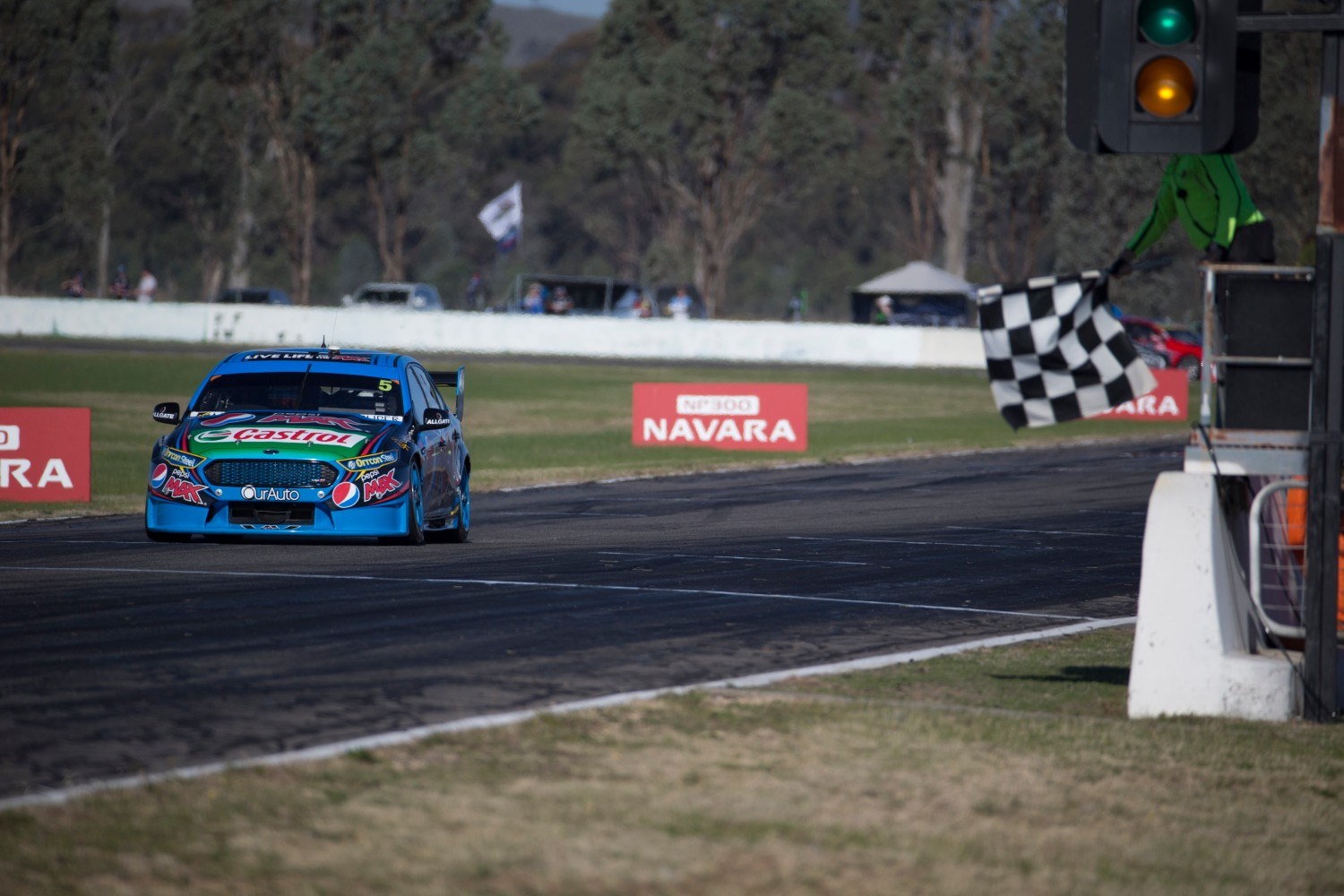 Victory for Winterbottom on the Sunday

It wasn’t so rosy for the Holden Racing Team; James Courtney went in deep at Turn 1 and took out teammate Garth Tander, with Lee Holdsworth and James Moffat also forced off the road.

Winterbottom, eyeing a maiden series title, put one over Mostert to claim season win No. 3, with Rick Kelly splitting the two Falcons.

Sunday’s race saw Winterbottom take the championship battle in the Prodrive garage by the scruff of the neck. 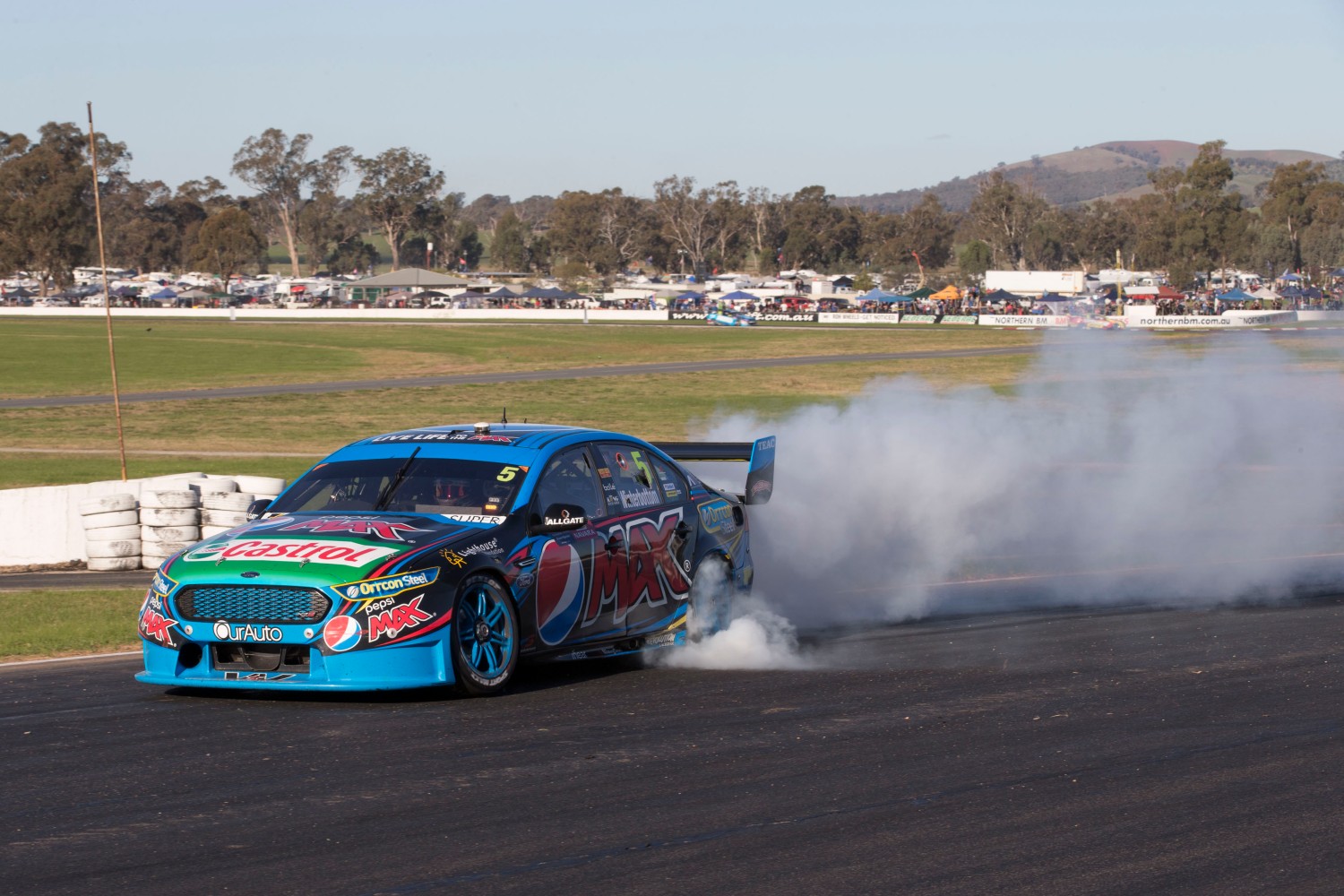 Winterbottom shreds his tyres in celebration

Mostert completed a clean sweep of pole positions for the weekend, with Winterbottom on the front row.

It was smooth sailing for Mostert, but it fell apart in a matter of seconds for the defending Bathurst winner.

After first pit stops were completed, Mostert lost the rear of his car by driving wide on entry to Turn 4. He backed his Falcon into the tyre barrier on exit, and came home 25th.

Winterbottom was largely unchallenged from there, beating home Fabian Coulthard and Craig Lowndes, who threatened to claim his 100th career win.

With Mostert 25th, Winterbottom enjoyed a 223-point lead over his teammate in eighth, with Lowndes just 12 points down in second.

Winterbottom would go on to win his first and so far only drivers’ title, clinching the crown on the Saturday at the Homebush season finale. 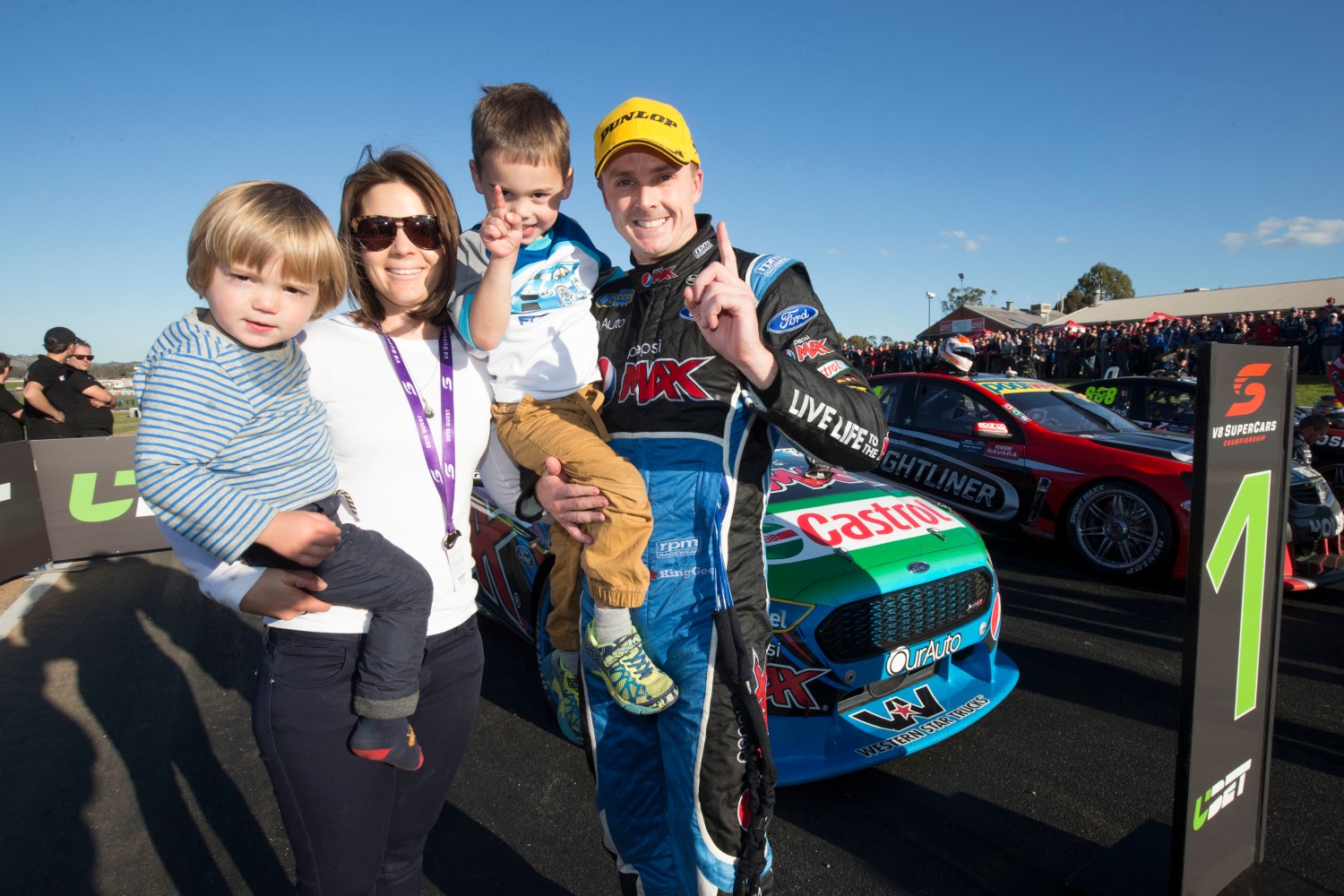 A happy weekend for the Winterbottoms

Six years on, can Winterbottom end his wait for Team 18 success at one of his favoured stomping grounds?