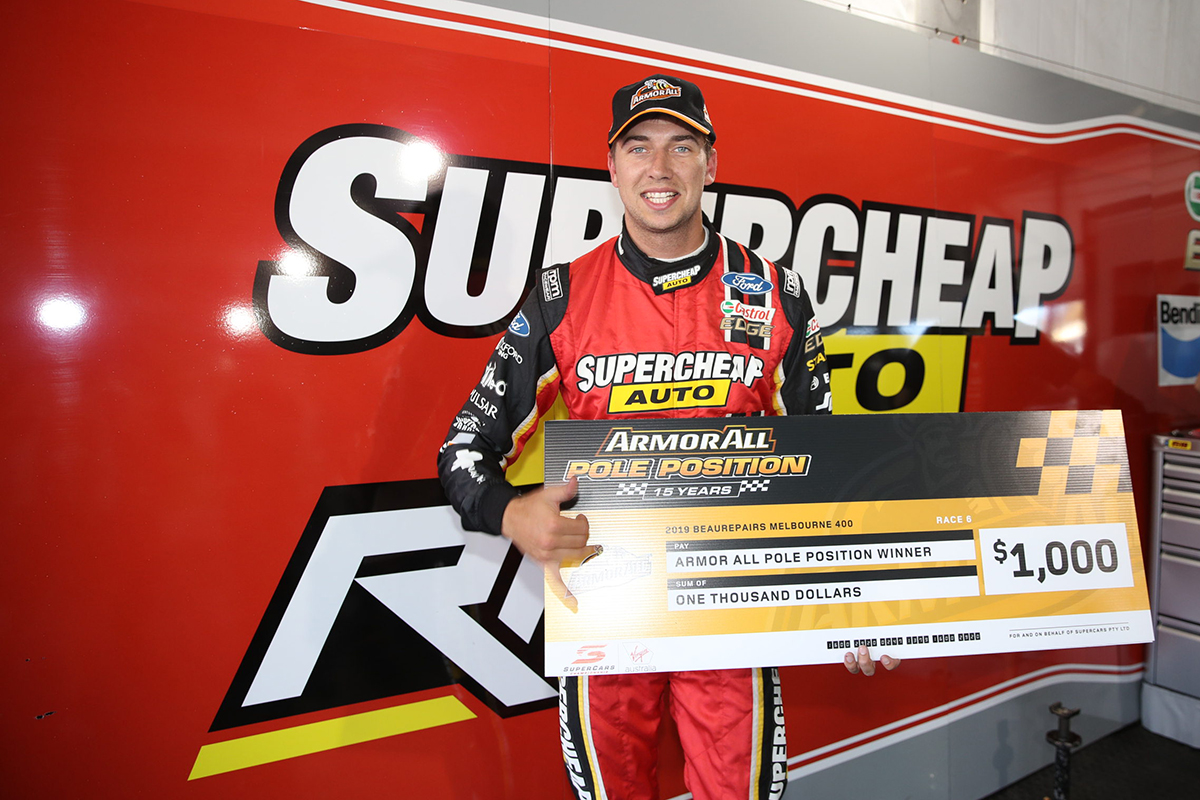 Chaz Mostert ended Scott McLaughlin's dominant run to take ARMOR ALL Pole for the final leg of the Beaurepaires Melbourne 400 on Sunday.

McLaughlin led the way in both 10-minute sessions on Thursday afternoon, and continued that form with another commanding performance on Friday afternoon.

That took his Supercars pole tally to 50, and the defending champion led the way into the closing stages of the final 10-minute hitout with a 1:54.3655s.

He sat 0.2663 seconds clear of Jamie Whincup, but Mostert left his lap in the Supercheap Auto Mustang late.

“We’re starting two races this weekend where the points don’t matter so much at the pointy end, but we’ve got some work to do in the longer races,” Mostert, who will start the opener down in 22nd, said.

“The car has felt pretty good here through the weekend, it’s just a bad credit to me, I just haven’t been consistent, just making small little errors.

“When you have to put it all on the line in one lap it can really cost you in qualifying.

“Hopefully we can find a groove and come through in those longer races and capitalise on the ones we’re starting at the front.”

McLaughlin said: “The first sector I lost a chunk of time there. I just went that little bit too deep and it just locked the front into Turn 3.

“I tried to rescue it but then it carried too much speed through, so I was wide on exit.

“You lose a chunk and then, because it’s such a flowy track, you’re trying to get back into your rhythm the whole time.

“It’s the hardest qualifying of the year I feel, because it’s just one lap. It would have been cool to go four-up, but congrats to Chaz and his team.”

Having been 16th after his first run, van Gisbergen moved his Red Bull Holden Racing Team Commodore up the order in the closing stages.

All four Tickford Mustangs were in the top 10, with Will Davison in sixth and Lee Holdsworth in 10th separated by Mark Winterbottom, Fabian Coulthard and Tim Slade.

Late-improver James Courtney and David Reynolds just missed the top 10, while the best of the Kelly Racing Nissan's was Rick Kelly in 18th.

The opening race of the Beaurepaires Melbourne 400 starts at 5:55pm on Friday, with McLaughlin to lead the field away.