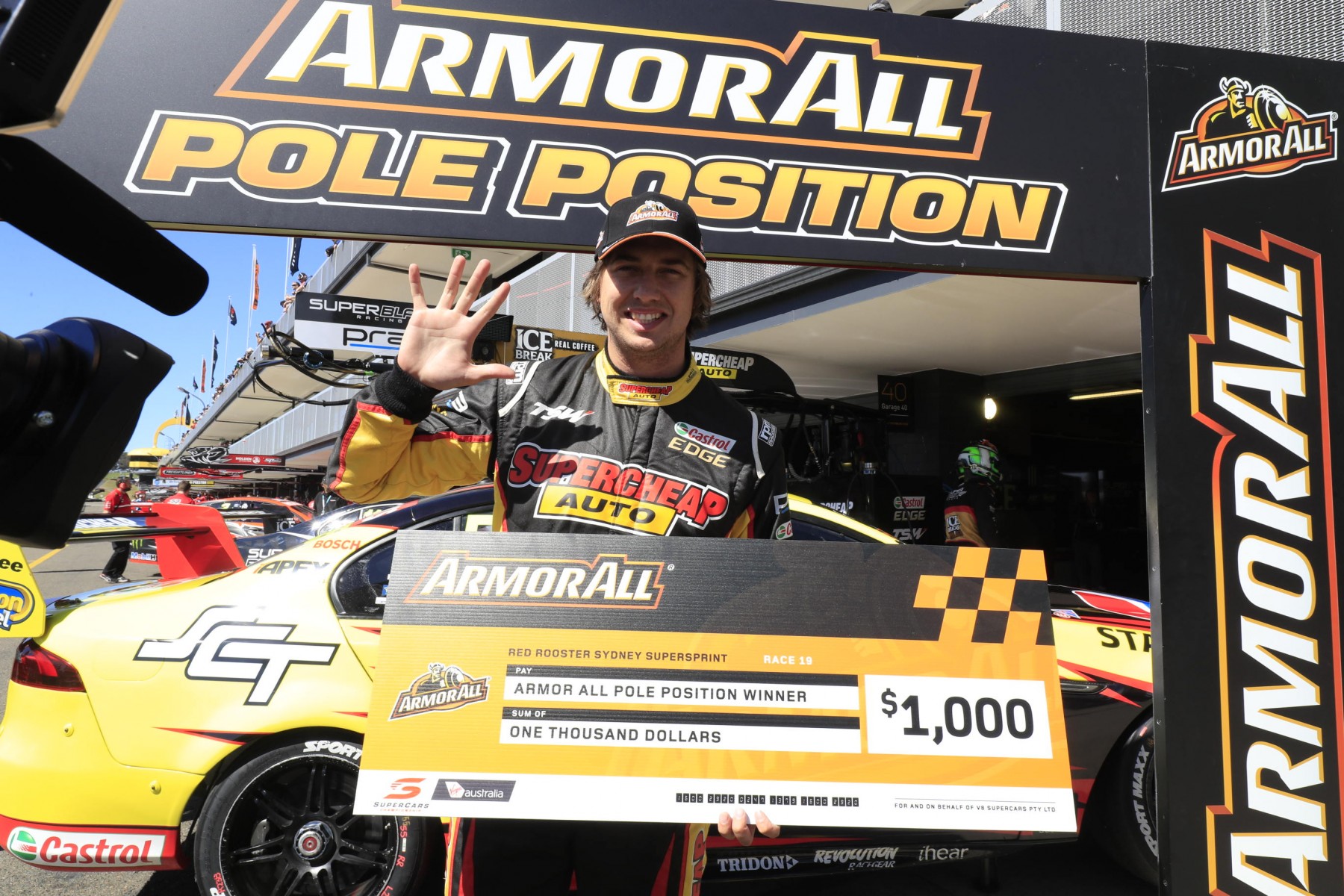 He declared himself out of the championship fight after Townsville but there is something Chaz Mostert is gunning for this year – as well as his first 2016 win.

Despite missing four rounds in 2015 after a qualifying crash at Bathurst, Mostert won the ARMOR ALL Pole Position Award after scoring 10 P1 starts across the season and being almost untouchable over one lap.

Once again he’s leading the way, having reset the lap record over the weekend at Sydney Motorsport Park and taking both poles. He has five to his name this season, with closest challenger Mark Winterbottom on three, and Scott McLaughlin, Shane van Gisbergen and Jamie Whincup all with two.

There are 10 poles left to take – one each at Sandown and Bathurst (which have different qualifying formats), two at the Gold Coast and Sydney Olympic Park, and four in Auckland.

After two P1 starts at the Red Rooster Sydney SuperSprint, Mostert finished fourth and third and was by far the best performer in the Prodrive stable, with Mark Winterbottom having a disaster event.

His efforts saw him jump from ninth to seventh in the championship over the weekend.

“It’s good to get today and another two pole positions, I’d like to try and get to the end of the year and try and get another ARMOR ALL Pole Position Award – if we can walk away with that again this year that’d be pretty cool,” Mostert said yesterday.

“I’m really enjoying the one lap pace out of our car, last year and this year.

“It’s taken a bit this year to really gel with my engineer Brad [Wischusen] and try and get the most out of each other. [When we] came off the last test day we felt like we made some gains with the car.

“This place I’ve really enjoyed racing around the last couple of years, wet or dry, I’ve been up the pointy end – maybe it’s just a pretty good format, the track with this car.”

While Mostert is yet to put a win on the board in 2016, he insisted he wasn’t frustrated by the lack of results. This time last year, he was second in the championship and coming off two wins at SMSP heading into the enduros.

All he is focused on is improving the Ford Falcon FG Xs, with another test day before the next event, the Wilson Security Sandown 500.

“It’s not frustrating," he said.

"We’ve got one part of our game good, which is qualifying at the moment – we really need to work on the race pace, I guess.

“Today [Sunday] was pretty good in the middle of the stint in that last run home, but we failed to have that overall tyre grip at the end.

“We learnt a lot this weekend. The things we need to look at as a team and try to work on, we’ll go back to the workshop – we’ve got one test day before Sandown and we’ll see if the boys can come up with some whiz bang bits and get us a bit more tyre life.”