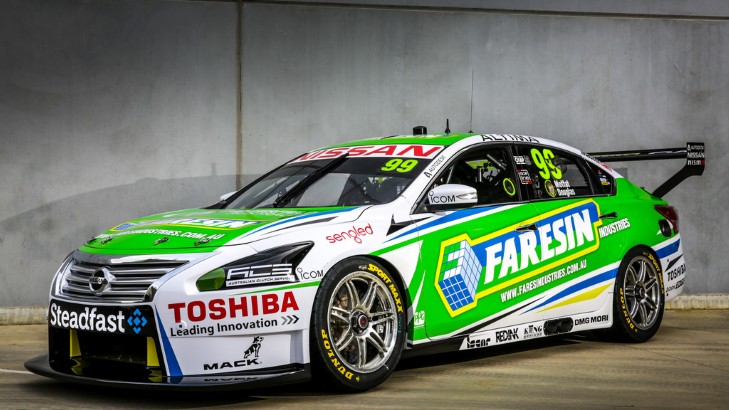 Nissan racer James Moffat and co-driver Taz Douglas will hit the track at this weekend's Castrol Gold Coast 600 with a new naming rights partner as Faresin Industries joins Nissan Motorsport as the primary sponsor for the remainder of the 2015 V8 Supercar Championship.

Faresin Industries has also confirmed an ongoing association with the Team beyond 2015.

Faresin, which is distributed locally by Chesterfield Australia, is one of the world's premier agricultural machinery producers, specialising in designing, manufacturing and selling worldwide feed mixer wagons for the livestock sector and telescopic handlers for agricultural, industrial and construction markets.

"Faresin is proud of our new association with Nissan Motorsport and is very excited to launch our brand to the Australian market with the Team".

Having recently expanded itsproduct line up in Australia, Faresin will launch the association via its naming-rights partnership on the #99 Nissan Altima.

"We are proud to work with Faresin Australia to support the introduction of Faresin products to the Australian market," Nissan Motorsport General Manager Nick Ryan said.

"Faresin is a leading global producer of agricultural machinery and is a great coup for Nissan Motorsport to appeal to and secure a prominent international brand in the agriculture space.

"V8 Supercars remains the primary sport in the country for its connection with rural and regional Australia and we look forward to showcasing the range of Faresin products through this partnership."

The schedule of on-track activity for this weekend's Castrol Gold Coast 600 will feature four practice sessions on Friday, qualifying, the ARMOR ALL Top 10 Shootoutand a 300km race on Saturday, with a final qualifying session and 300km race on Sunday.