Notice: Constant WP_CACHE already defined in /var/www/supercars.com/release/local.config.php on line 3
 McLaughlin: We got out of it pretty lightly - Supercars

Having dominated the Bathurst build-up, including a record-setting pole lap on Saturday, McLaughlin and co-driver Alex Premat were the first retirement in the race.

The #17 Ford sat third with little over 45 laps completed when engine issues first surfaced with Premat at the wheel.

Initially hoping it was an electrical issue, the team asked Premat to ‘recycle’ the car’s electronic dash, before installing a new engine map into the Electronic Control Unit at a pitstop.

The problem, however, proved to be mechanical, with a suspected valve issue eventually resulting in a complete loss of oil pressure and the car stopping at The Cutting on lap 76 of 161.

Entering the weekend holding an 84-point over Whincup and with 300 available for the win, the failure threatened to prove a hammer-blow to McLaughlin’s championship.

Whincup, though, soon struck his own engine trouble and, after a lengthy stint in the garage, eventually returned to the track for the final two laps to salvage just 20th and 90 points.

Third place allowed Fabian Coulthard to shoot to the championship lead on 2431 points, with Whincup 91 behind in second and McLaughlin a further eight back in third.

“With 90 laps to go I was like ‘oh no… it is going to hamper our [championship] position, but then we got out of it pretty lightly,” reflected McLaughlin. 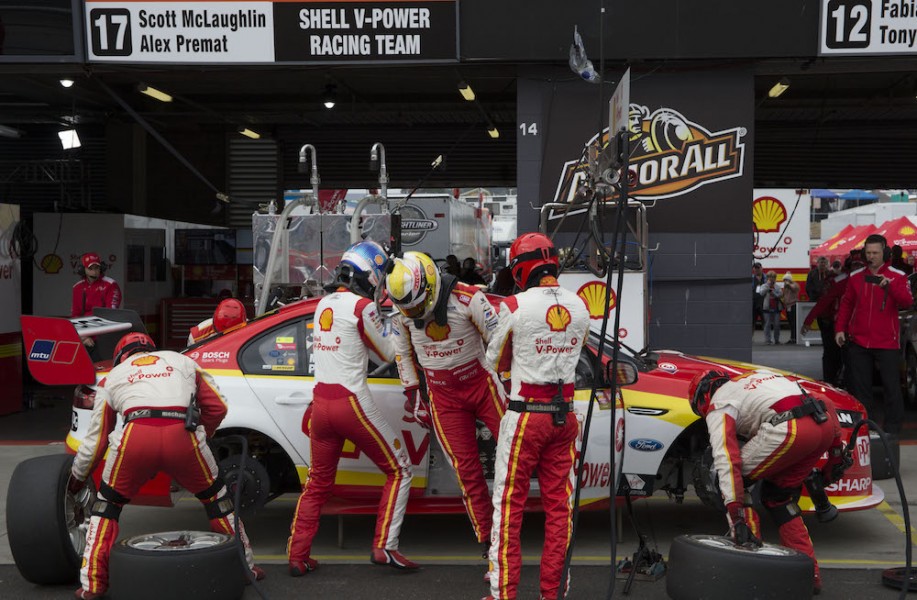 “I don’t mind being the chaser for a while. We know we are fast at the Gold Coast, I feel like it is a good track for both of us and the last few races after that we should be OK.

“It is going to be a good battle for the championship, not only between me and Fabs, but also Jamie.

“We are still behind but to be one-three in the championship as a team is fantastic and we can build on it together.”

Regardless, the result was a major disappointment for McLaughlin after the speed he had shown throughout the weekend, culminating in the 2:03s Shootout performance.

“I am gutted. I think if it was an-all dry race, potentially, we had a really good car,” he said.

“Who knows, hindsight is a wonderful thing, but I felt like we had a really strong car in the race, so to not be able to show that, or try how we went or didn’t, it just leaves you wondering.

“We were traveling really good, the car was nice and then all of a sudden we saw it’s dropped speed down the straight and we just didn’t know what it was.

“We thought we could have fixed it a couple of times and I was getting ready to jump back in the thing just stopped and we were done.”

McLaughlin stayed with his Shell V-Power Racing squad for the remainder of the race, helping the Coulthard/Tony D’Alberto side of the garage where he could.

“It was such a different perspective. I was really entrenched with the engineers, it was really cool,” he said.

“I was speaking to Phil [Keed, engineer] and saying what I would like said on the radio, and he was saying that to Fabs. I guess I made the best out of a bad situation in the pits.”