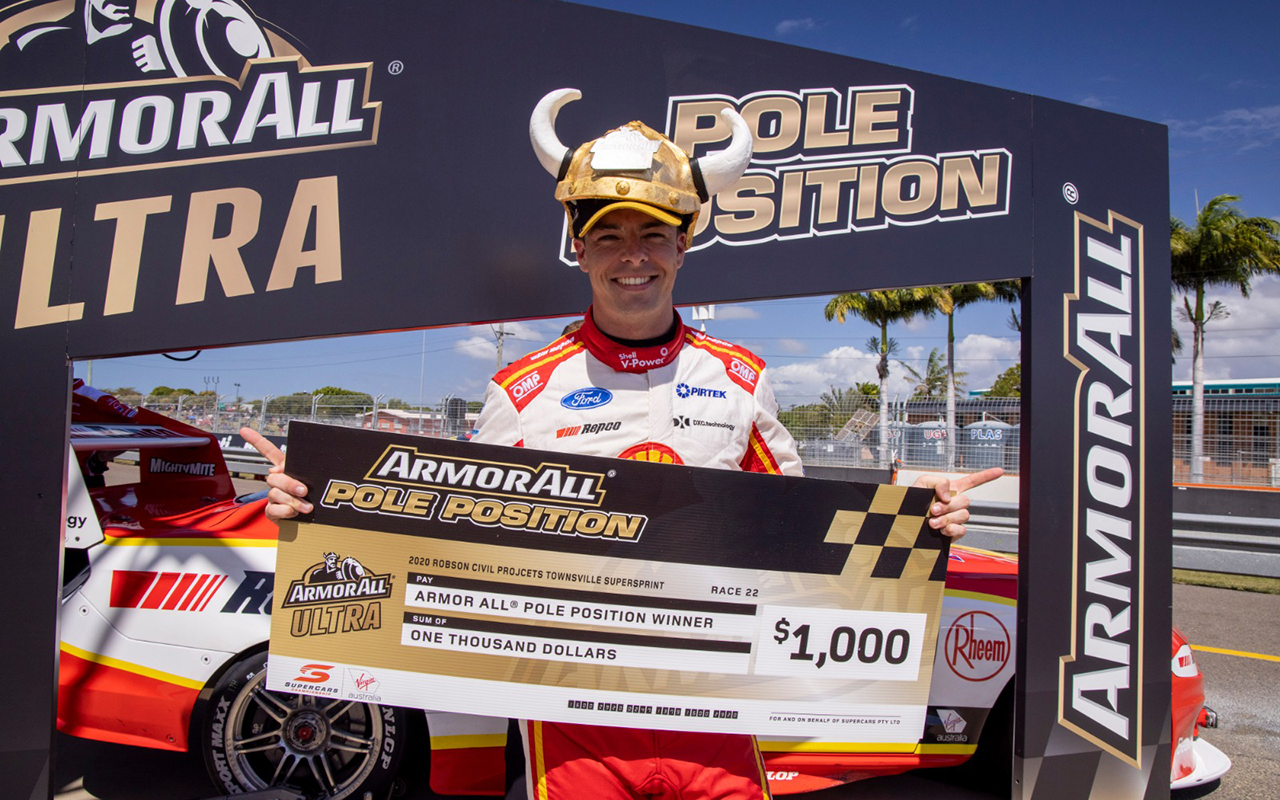 Scott McLaughlin scored his 10th ARMOR ALL Pole of the 2020 Supercars season in the Top 10 Shootout at the Robson Civil Projects Townsville SuperSprint.

The Shell V-Power Racing driver swept the three-part session, topping all three segments and going faster on each occasion.

To put the margin in context, 0.3375s separated van Gisbergen from the slowest runner in the Shootout, Penrite Racing’s David Reynolds.

Last week, McLaughlin qualified 16th and 13th for the opening two Townsville races, particularly struggling under brakes into Turn 2, before scoring pole for the finale.

“It’s a credit to the guys, they’ve made a rocketship this weekend, or at least an improvement. It’s bloody awesome,” said McLaughlin, who now has 71 career poles.

“Honestly I’m braking 20 metres deeper [into Turn 2] because I’ve got the confidence.

“Unfortunately we had a blip on the radar [last week] but credit to the team for bouncing back.”

Jamie Whincup was the second-last driver to run in the Shootout, but managed just seventh after a series of hairy moments, including a big rear-lock into Turn 3.

“I just lost the rear on a couple of occasions and that was the end of the lap time unfortunately,” he said. “We’ve got a bit of hard work to do this afternoon.”

Waters was the biggest improver in the Shootout, jumping from sixth in Q2 to third aboard Tickford’s Monster Energy Mustang.

Nick Percat, Jack Le Brocq and Reynolds fill eighth through 10th, maintaining their positions from the end of Q2.

Bryce Fullwood and Fabian Coulthard will share the sixth row of the grid, having both been bumped out of the Shootout field in the dying stages of Q2.

Fullwood climbed to 10th with a late lap before De Pasquale lobbed into the 10 right at the finish, while Coulthard’s 12th came after being denied the chance to improve.

“We tried to make a [setup] change and ran out of time [to do a final run],” explained the Kiwi.

Others out in Q2 were Tickford’s James Courtney, who managed just 14th, and Team 18 duo Mark Winterbottom and Scott Pye, in 16th and 17th.

Kelly Racing’s disappointment was spread between Q1 and Q2 – Andre Heimgartner set to start 15th and Rick Kelly 21st, with the latter not making it out of Q1.

“Unfortunately it’s a reflection of where we’re at,” shrugged 2006 Supercars champion Kelly, who lost track time with a sticking throttle in Practice 1.

The others eliminated in Q1 were Jack Smith, Jake Kostecki and Chris Pither.

The weekend’s first of three races will take place from 3:40pm local time.