With McLaughlin taking his third ARMOR ALL Pole of 2018, the pair were half-a-second clear of their nearest challengers, the three Triple Eight Commodores.

McLaughlin fired an early shot with the only sub-1:30s lap of the first runs, capitalising on residual rubber from the preceding Porsche Carrera Cup session, his 1:29.7996s two tenths clear of Jamie Whincup in second.

After a brief red flag for Michael Caruso’s stopped Nissan, five minutes in, Fabian Coulthard lowered the benchmark to 1:29.6972s.

His time at the top was fleeting, with McLaughlin recording his 1:29.5057s almost immediately.

Opting to save a new set of tyres for the race, McLaughlin and Coulthard sat out the last eight minutes.

The rest of the field headed back out for the final five minutes, only for Shane van Gisbergen to pit after his outlap for a ride-height change.

There was no change at the top of the order, McLaughlin taking his 36th Supercars pole over Coulthard by 0.1915 seconds.

“For the whole team, to lock out the front-row is a big thing at a track that we know we like,” said McLaughlin.

“We’ve got to do it in the race now. We got plenty of poles last year, but we need to convert them now.

The pole is McLaughlin’s seventh at Phillip Island, and his fifth in succession.

“I just love this circuit,” he added. “It’s a really cool track where I can flow the car and really learnt my driving style I’ve learnt over the years.”

Triple Eight’s three Commodores were next in the order, Friday pacesetter Whincup 0.5466s off McLaughlin’s effort. 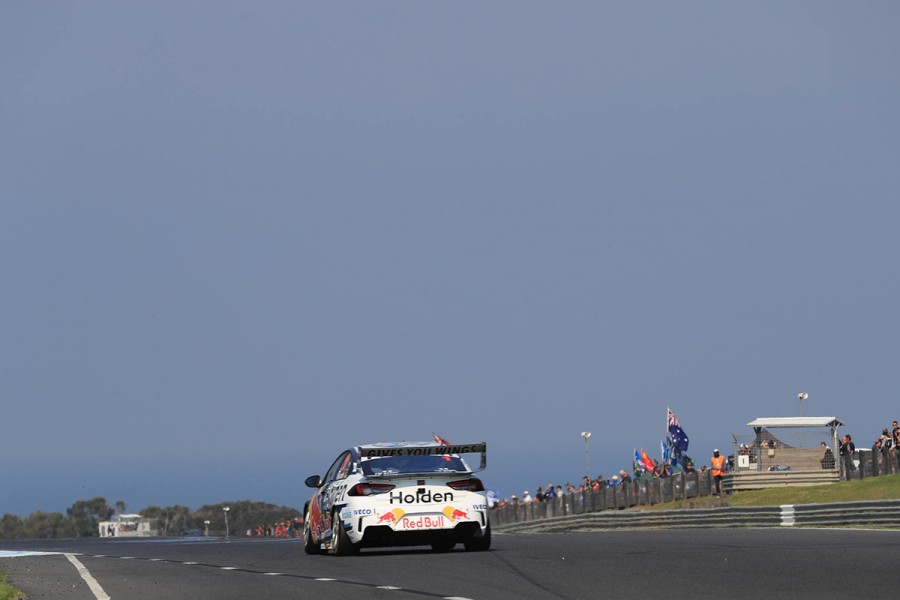 Van Gisbergen did not set another time and wound up fourth, while Craig Lowndes improved from ninth to fifth in the closing stages.

“In Practice 2 yesterday we just went in the wrong direction and had to go back to base,” said Lowndes.

“The car was OK in the first run, the second run we made a tweak, got better, and we made another change and made it better again.

“We didn’t want to do three runs, but we had to. Qualifying makes such a big difference in your result, so yes we used a third set, but we should be right.”

That put Lowndes ahead of Rick Kelly, the lead Nissan in sixth place for the 2006 champion’s 500th Supercars start.

“The time to do it was lap one, that’s when the grip was at the highest and it started to degrade since then,” said Reynolds.

“No one went faster since then, except for Al [McVean, engineer], who came up with a good change.

“It transformed the car and gave me more confidence. I wish I had it at the start.”

Mark Winterbottom was 12th in another Tickford Ford, having run off at Turn 2 on his first flying lap.

Splitting the pair was Will Davison, performing strongly in Milwaukee Racing's ex-Tickford Falcon.

Walkinshaw Andretti United’s Commodores could only manage a Scott Pye-led 16th and 17th, James Courtney locking up into MG on one of his attempts.

Todd Hazelwood and Simona De Silvestro, like Winterbottom, overshot Turn 2 and had to run through the Southern Loop gravel on their way to 23rd and 25th.

The session was red-flagged five minutes in, when Caruso’s Nissan slowed in the middle sector with an oil-pressure warning light on.

Caruso did not set a time, unable to rejoin the session after causing the stoppage, and will start 26th and last.

“Unfortunately the telemetry is not working, but the oil pressure light came on,” Caruso said. “You can’t ignore that.”

Race 9 of the 2018 Virgin Australia Supercars Championship starts at 3:45pm.