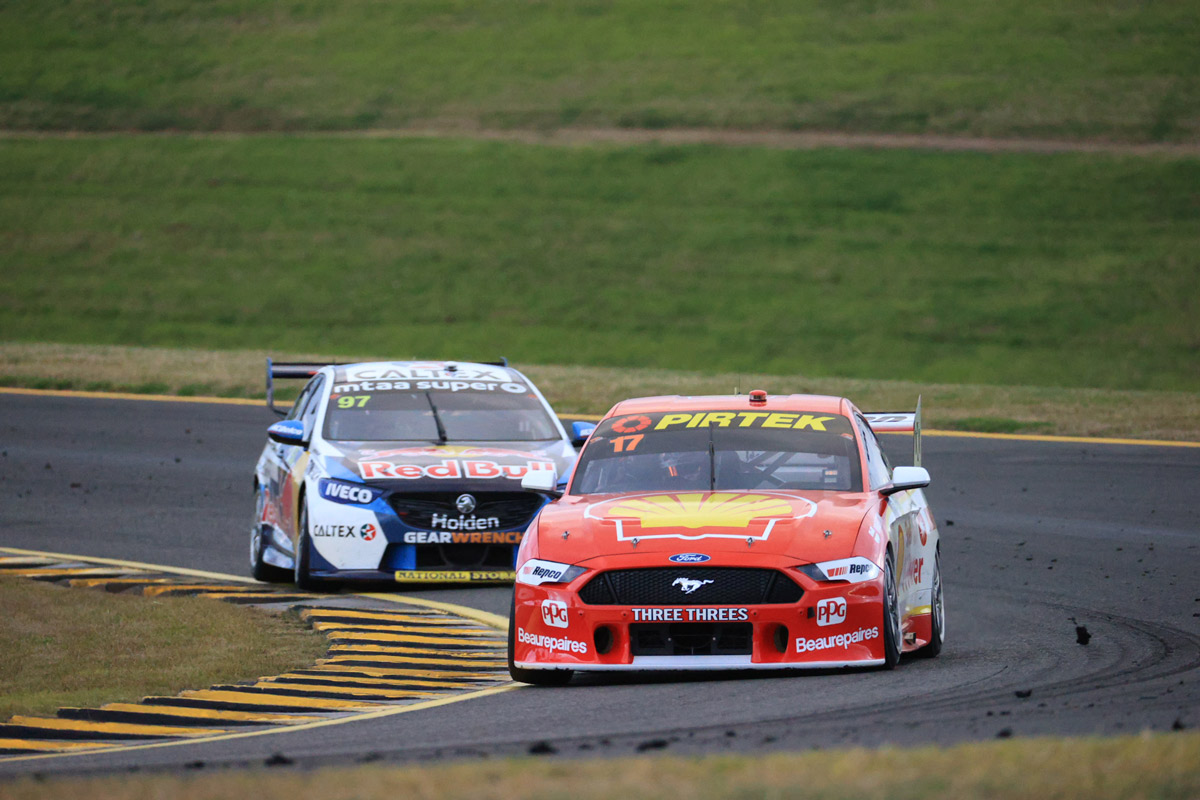 Scott McLaughlin extended his Supercars championship lead by holding off Shane van Gisbergen in an intense first race back from the COVID-19 shutdown.

Polesitter McLaughlin found a stern challenge from a familiar suspect in his Kiwi rival, who used fresher tyres to launch a late charge at Sydney Motorsport Park.

Van Gisbergen made light work of that trio though, with a particularly bold move on Waters as he followed Whincup by the Monster Energy Mustang at Turn 1 on lap 21 of 32.

The #97 Commodore was all over the back of McLaughlin’s Ford by lap 29, but simply couldn’t find a way past, ultimately crossing the line 0.1876s behind.

It was a thrilling return to racing between two of the sport’s biggest stars, setting the stage for the remainder of the 2020 Virgin Australia Supercars Championship.

“He’s like a cockroach, you can never get rid of him, he’s always around!” McLaughlin laughed of van Gisbergen.

“I knew I was going to be in a little bit of trouble in that last stint, the way he came at me in the first.

“So we’ve got a bit of work to do with how we tune it up but you take them when you can get them.

“It was tough in those last five laps but I did the best I could. It was a great race.”

Van Gisbergen, who rose from 13th to eighth in the standings, was disappointed he couldn't capitalise on his late-race pace.

“It was a pretty decent race but every time you get close, the aero-wash is ridiculous, so I couldn’t do much with it,” he said.

“We tried to go long and have a better chance at the end but we could him and it just understeered. It’s hard to pass, we need to try something different tomorrow.”

McLaughlin received a bad sportsmanship flag for exceeding track limits late in the race, adding to the drama.

“You’ve got to play the game a little bit. Everyone else does, I saw a couple of others got it,” he said.

“But I just wanted to maximise my limit and I knew I’d get a little flag and it was about consolidating from there.”

With the lead battle taking centre stage, it was a fast-starting Jamie Whincup who would take a distant third to round out the podium.

Whincup jumped from fifth to third off the line, as McLaughlin ahead stuttered initially before regaining ground in the second phase of his getaway to stay just ahead of van Gisbergen.

Both Red Bull Holden managed their pace in the opening stint as the #17 Mustang blazed away out front, leading by 1.8s after the opening lap.

Whincup was solid throughout to secure a double podium for his team, with Chaz Mostert fourth and Nick Percat an excellent fifth for Brad Jones Racing.

Early stopper Waters slipped back to sixth after running as high as second, with teammate Holdsworth just pipping Anton De Pasquale for seventh.

Mark Winterbottom was ninth while Fabian Coulthard had a tough run to 10th after a big tyre lock-up made for a difficult opening stint.

David Reynolds was another to suffer from a lock-up, finishing down in 21st after having to make a second stop.

Among the biggest movers was James Courtney, who rose nine spots to 12th in his Tickford Racing debut.

With clean racing through the 32 laps, Team Sydney’s Alex Davison was the only retirement due to a broken steering clevis.

McLaughlin now leads the championship by 41 points from Whincup.

Qualifying for the second race of the weekend will kick-off the Sunday action at 10:35am AEST.