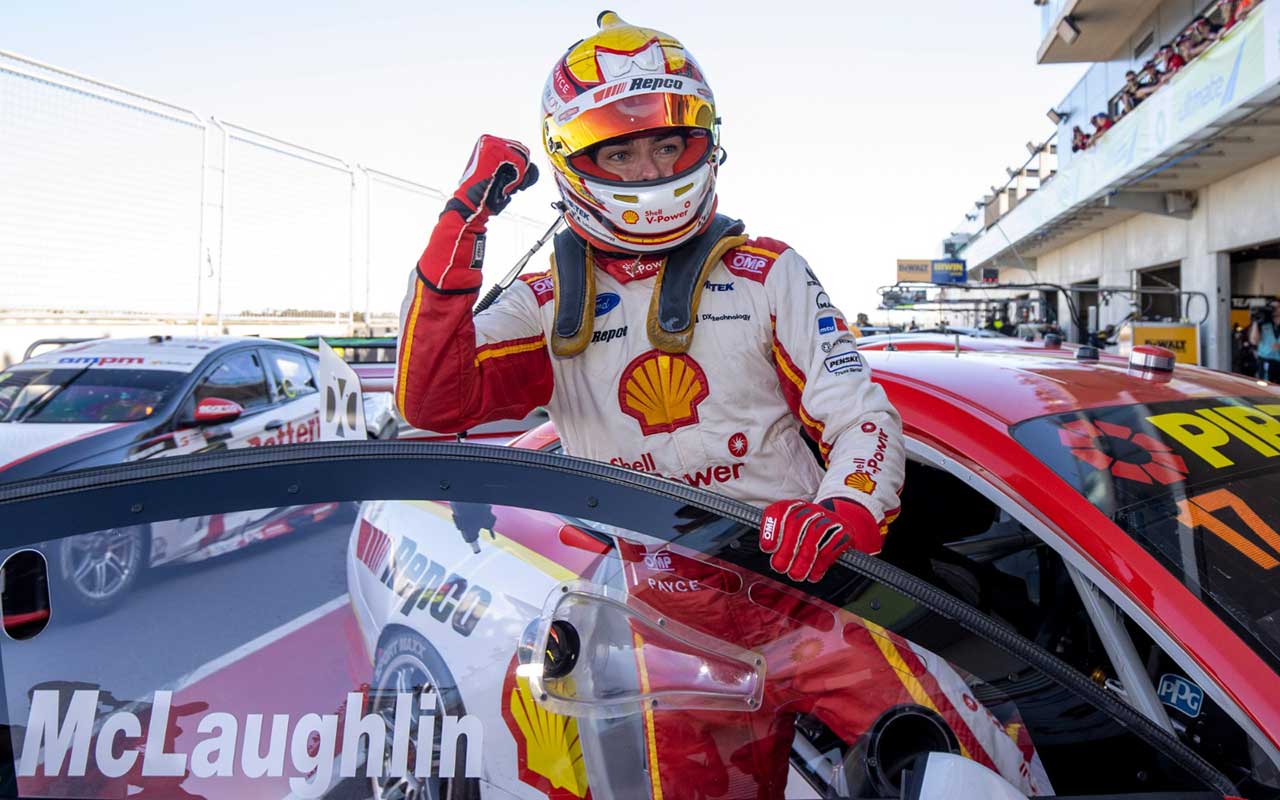 Scott McLaughlin took a commanding victory in the final race at the Repco The Bend SuperSprint, on a big day for his pursuit of a third-straight Supercars title.

After an action-packed opening two races, the third 24-lap contest was a more conventional affair, with McLaughlin the effective leader from start to finish.

Tyre conservation was again a major factor and McLaughlin waited until the halfway mark to make his pitstop – two laps after second-placed teammate Fabian Coulthard.

McLaughlin then managed his rubber to the finish, taking the chequered flag 1.8651s ahead of Coulthard, with Jamie Whincup a further four seconds back in third.

Whincup had dropped from third to fifth off the start, and then picked his way past Nick Percat and Chaz Mostert during a long first stint.

That leaves McLaughlin with a 215-point championship lead over Whincup with two events remaining, extending his advantage by 64 across today’s two races.

Second place for Saturday winner Coulthard meanwhile meant he scored the most points for the weekend.

“I’m proud of Fabs and car #12, they’ve been on the receiving end of a few bad runs. He hasn’t forgotten how to drive obviously, he’s a great teammate,” said McLaughlin.

“For us, the car is fantastic to drive and I’m really proud of everyone at Shell V-Power Racing to bounce back after yesterday.

“Track position helps, being in front. When you’re behind people they dictate what you do, so it was important to get the start and that’s what we did.”

Added Coulthard: “It’s been a solid weekend for our side of the garage. Any time you can get a one-two in this category the team is doing an awesome job.”

Whincup was pleased to score a podium on a tough weekend, but felt it could have been second had he not lost time behind De Pasquale, who was fading late after charging from 18th on the grid.

The Red Bull Commodore hit the back of the Penrite car at Turn 6 on lap 20, requiring Whincup to slow up in order not to receive a penalty, before refocusing and making a clean pass.

“Anton shut the gate, we were racing hard, he was obviously pretty desperate for the podium position and I wanted to get through as well,” said Whincup.

“I’m kicking myself a little bit, I wish I’d been a bit more patient and waited half a lap because I may have been able to have a go at Fabs as well.

“It was a little wasted opportunity. We’ll throw that in with the mistakes this weekend and hopefully we can clear some of them out for next week.”

Cameron Waters was the top Tickford Racing runner in fifth, while Scott Pye made the most of his ninth-placed starting spot to take sixth.

The winner of the day’s earlier race, Shane van Gisbergen, finished 14th after serving a 15-second penalty at his pitstop.

Van Gisbergen had spun Andre Heimgartner at Turn 17 on lap one – the Red Bull Holden turning into the left-rear of the Mustang, which was down the inside taking sixth place.

There was further chaos behind, as Jack Le Brocq was spun across the track on corner exit, into the path of Mark Winterbottom, who subsequently clobbered James Courtney.

All that put Winterbottom and Courtney out of the race on the spot, and left Heimgartner with a lot of work to do to recover an eventual seventh, one place ahead of teammate Rick Kelly.

For the third straight race, Mostert failed to turn a top-three qualifying result into a top 10 finish, taking the flag 16th having struggled for tyre life.

Teammate Bryce Fullwood also had a race to forget, finishing 19th after copping a 15-second penalty for early contact with Zane Goddard and Alex Davison.

Fullwood’s fellow Saturday podium finisher Jack Le Brocq was 21st after tyre trouble forced him into a second pitstop – rejoining to take the fastest lap in the closing stages.

The Virgin Australia Supercars Championship will continue next weekend with the OTR The Bend SuperSprint.