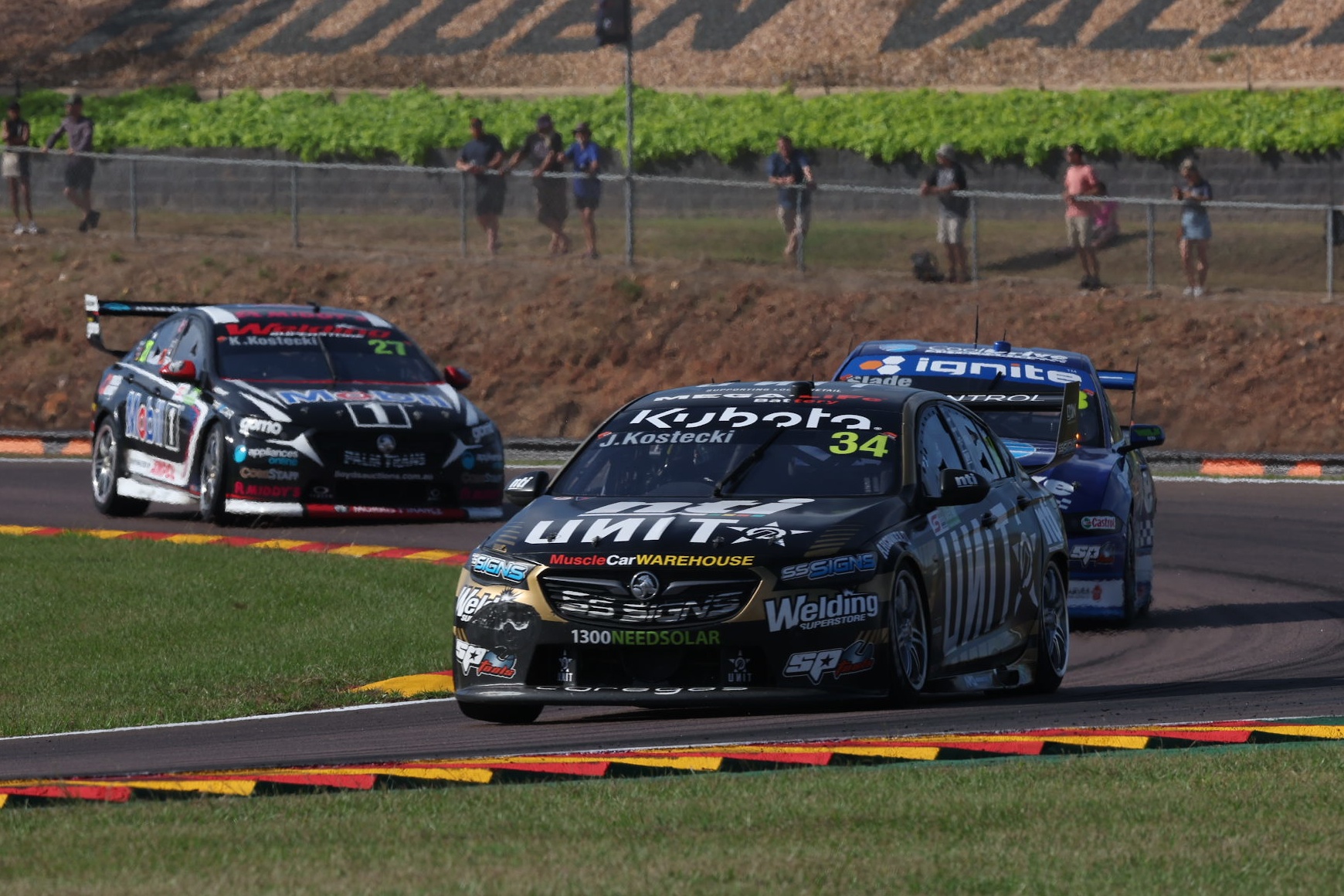 Jake and Kurt launched from 11th and 15th respectively, and avoided the carnage at Turn 1 to emerge with straight cars.

To that point, the day had been bright for the younger brother, with Jake a surprise quickest in the first part of qualifying.

However, the duo crossed the line sixth and seventh, before being promoted to fifth and sixth following James Courtney’s penalty.

An incredible Kostecki brothers fourth and fifth loomed with Nick Percat’s podium under a cloud following a post-race investigation.

“We were pretty stoked with that after qualifying 11th, which we were happy with” 21-year-old Jake told Supercars.com.

“We could have started higher if I got everything together, but I guess every driver would say that.

“I had a good start, kept it to the inside, kept my nose clean and I think we’ll end up P4.”

Matt Stone Racing young gun Jake’s stunning run could have come to grief had he qualified further up the grid, with the first three rows of the grid implicated in the melee which wiped out pole man Anton De Pasquale.

After he managed to avoid the chaos, the MSR driver kept his nose clean and nursed his Dunlop Super Soft tyres across the two stints to pip his elder brother to sixth.

“I had a glimpse of a DJR car starting to go wide, and I knew straightaway to stick to the inside,” he said.

“I followed Sladey through, and he went wide; I snuck down the inside, and off I went.

“With this new tyre, we didn’t know what it was going to do.

“We had a rough idea it wasn’t going to be too much different to the Soft tyre.

“You have to drive these cars as straight as you can, and keep the rear tyres alive.” 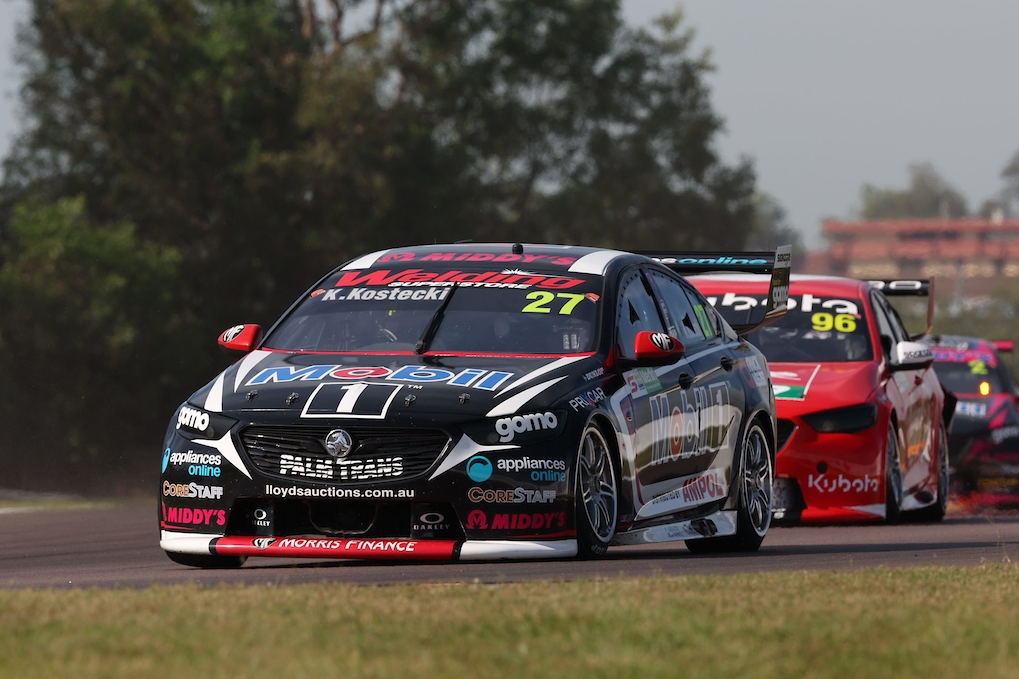 Kostecki cousin Brodie was also in the mix; Jake led Tim Slade, Brodie and Kurt on the restart after the race was neutralised by the BP Ultimate Safety Car.

“I had a little giggle in the car at the restart; I had Slade behind me, then it was Brodie and Kurt,” Jake laughed.

“I’m glad I got Sladey when I did, because it would have been all three of us in a row!

“After the race, I told him he did a good job, because he did.”

For Kurt, who is two years Jake’s senior, the result came down to a happy return of luck following a bruising OTR SuperSprint.

“That’s hard to come by sometimes; most of us are on the s**t end of the stick.

“For us, we got a good result and it all came together, and I’m pretty happy.”

With Thomas Randle ninth, Kurt ensured both wildcards finished in the top 10.

He also had a front row seat to the first-corner drama, and after he found himself in the fight, was pleased to chase Jake to the line to score his best main game finish. 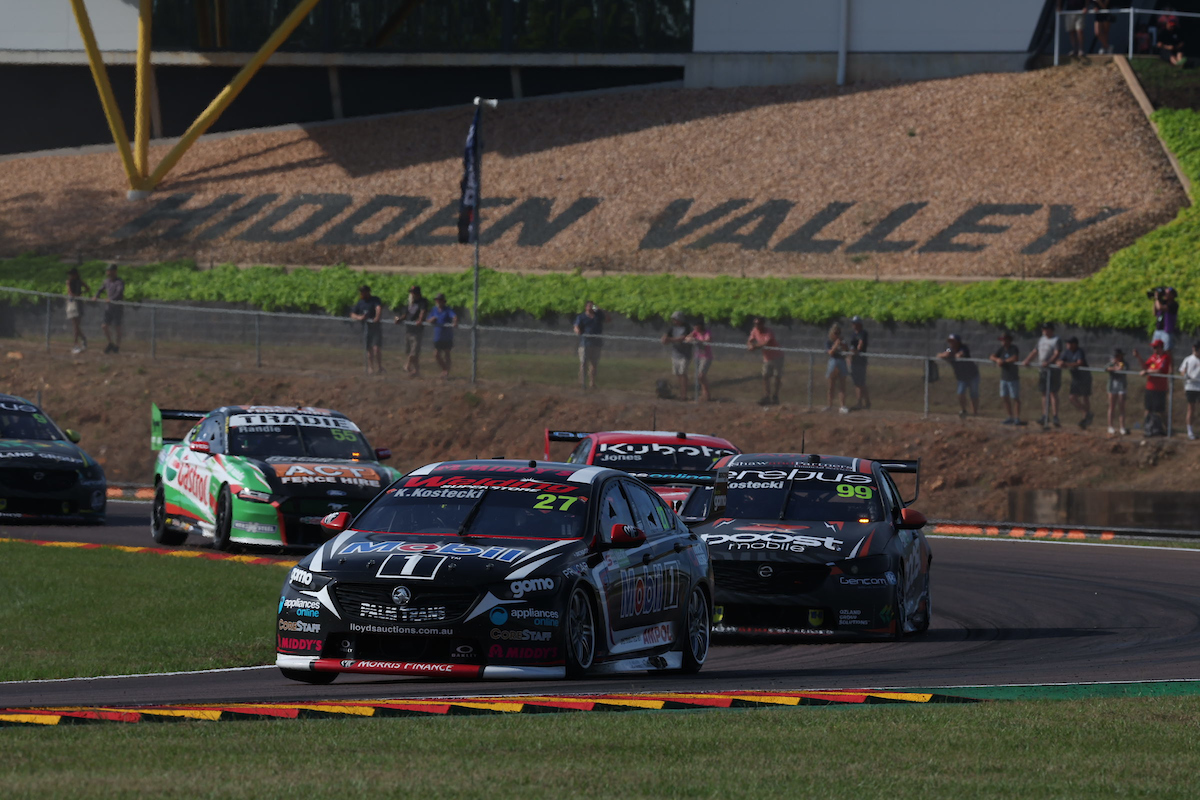 “I didn’t see much going on because it all banked up pretty quickly,” Kurt said.

“I saw a bit going on on the outside, but I was already on the inside, so I got through pretty quickly.

“It was hard to pass; if you follow for too long, the tyres overheat. When you come out of the pits on fresh tyres, you’ve got one or two laps to get it done.

“He had a gap on me, but I came hard at him at the end; I could see his eyes in the mirror.

“I followed him to the line, but it was good for both os us to get a result.”

Jake will launch from 14th and 26th in the two Sunday races, with Kurt to jump from 25th in the two 38-lap sprints.