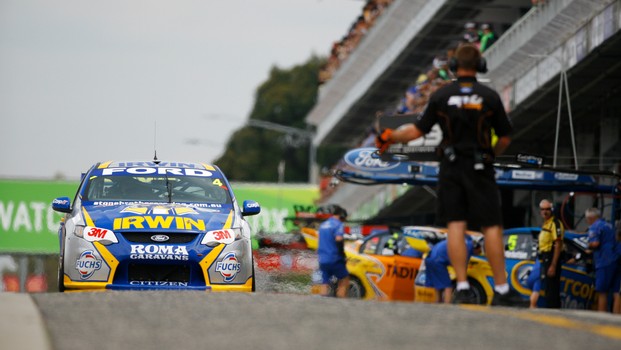 IRWIN Racing’s Lee Holdsworth has backed the decision for the V8 Supercars Championship to adopt double-file restarts in next year’s championship.

Announced recently as a change to next year’s race formatting, Holdsworth believes the move – which brings V8 Supercars into line with NASCAR and IndyCar with its restart process – is one that will instantly generate major entertainment for fans and television viewers.

“It’s what everyone wants to see. It might bring some more entertainment into the sport.

“I’ve watched a lot of IndyCar racing this year and the restarts are really exciting. It’s basically another start to the race; it’s not just another restart like what we’ve had previously.

“Instead of the boring old restarts where you file single file and nothing changes to the race, this will bring a bit of entertainment.

“Starts are the most exciting thing for the crowd and anything can happen. To have every restart like it will make it be like a brand new start.

“As a driver, I don’t see why you anyone would debate the change.”

Some drivers have suggested that being double file format will force some drivers to run through slippery ‘marbles’ (the off-cast rubber from racing tyres) off the racing line, with races featuring the soft Dunlop tyre making this worse.

Holdsworth acknowledges this fact but sees it being the same for everyone in the field.

“Everyone is going to have a disadvantage if there’s soft tyre rubber around,” he says.

“You will have to be double file before the last corner so everyone is going to have to be on an outside line through the last few corners no matter whether they are on the inside or outside.

“It’s a good point that the rubber will be down, but the sport is too predictable at the moment. We can’t forget that we are entertainment.”

The 60/60 race format for six events next year – where drivers will race for 60-kilometres before a 15-minute break and a rolling restart for a second 60-kilometre sprint – will generate the sort of racing as seen at Sandown this year.

“I think those short sprint races, like the ones we had this year on the Saturday at Sandown, will be exciting,” says Holdsworth.

“I can totally understand why they’d want to have more of them. The Sandown races this year were the most exciting of the year.

“The reason was that people could race as hard as they wanted and didn’t have to run to a fuel number.

“It was pure racing with guys going as fast as they could. There was more aggression in the passing because it all had to be done in the first couple of laps because there was not much time to pass and you had to be in full attack mode all race.”

Holdsworth finished eighth in this year’s championship in his debut year with Stone Brothers Racing in the #4 IRWIN Falcon.

He will line up for the Clipsal 500 in March in a brand new Erebus/SBR Mercedes-Benz AMG E-Class under the new Car of the Future era of the V8 Supercars Championship.