Having already shown its dark side, the Holden Racing Team today revealed its light side by taking the covers off its second stunning Star Wars: The Force Awakens Bathurst liveryin Melbourne.

On the 25th anniversary of its first Bathurst victory, HRT unveiled the #22 Commodore James Courtney and Jack Perkins will drive in next week's Supercheap Auto Bathurst 1000.

The Holden features a salient silver, black and red design promoting the next instalment of the legendary Star Wars franchise, with the popular Chewbacca replacing the iconic Holden Racing Team lion and driver on the left hand side, and a Rebel X-wing taking its place on the right.

Courtney, who remained on the Gold Coast in his recovery to be fit for Bathurst, said the Star Wars: The Force Awakens design is the best Bathurst livery in HRT's history.

"The Star Wars designs look great, but mine's definitely better than Garth's [Tander] - I'm glad to be the good guy and have Garth as the baddie," Courtney said.

"The team has done a sensational job, this is the most out-there livery HRT has ever had." 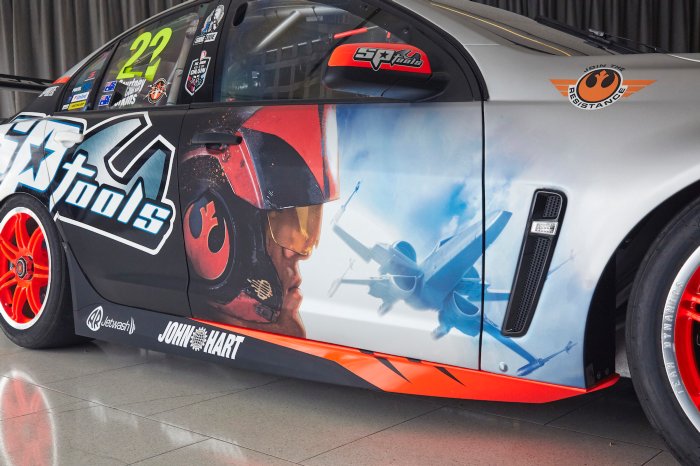 Co-driver Perkins agreed with his teammate, and said he's excited to have the Force with him.

"We can't go wrong with the Force on our side. To take the covers off such a unique livery on the anniversary of the team's first Bathurst win is special," Perkins said.

"I never imagined I'd be racing for Holden's factory team at Mt Panorama with Chewbacca and an X-wing on my car.

"It's the coming together of three childhood icons for me and a definite career highlight."

Holden Sponsorship and Motorsport Manager Simon McNamara said he believes the light side Commodore will receive the same outstanding response as the dark side's, which was the highest trending topic on Facebook in Australia the day of its release.

"The reaction of the Star Wars: The Force Awakens dark side Commodore exceeded our highest expectations, and there has been great anticipation for this second design," McNamara said.

"The collaboration between Holden and The Walt Disney Company Australia and New Zealand is off to a fantastic start, and we look forward to building on that with the execution of this activation." 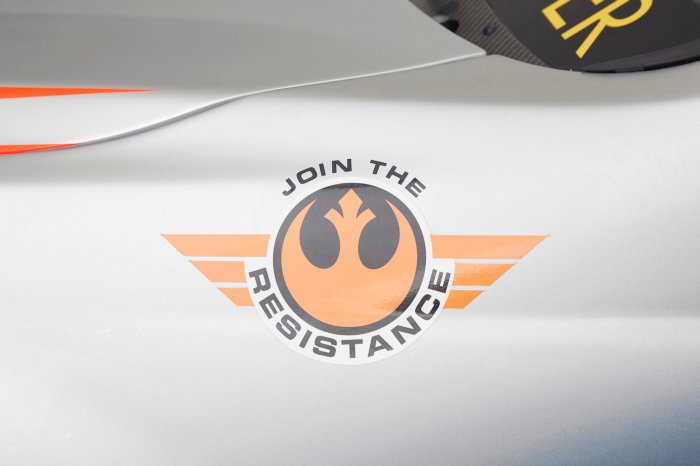 Set 30 years after the events of Return of the Jedi, Star Wars: The Force Awakens is the highly anticipated next chapter in the popular movie franchise, releasing in cinemas Thursday, 17 December, 2015.

Courtney is in a race against time to be fit for the Great Race following a freak incident at Sydney Motorsport Park last month, the 2010 V8 Supercars Champion last Friday undergoing another procedure to aid his recovery.

"It's been a painful experience but my recovery is going well. It's been five weeks since the incident and I've had a lot of specialists overseeing me and give me the best chance of coming back for Bathurst," Courtney said.

"Your body takes on so many forces across the top of the mountain, and if the ribs aren't healing properly, one could break again and cause a hemothorax, which is a lot more serious than my initial injury.

"We're pressing on as hard as we can. I've got a final scan this week to see how the bones are healing. After that we make an informed decision about Bathurst."

Former champion Russell Ingall is again primed to fill in as he did at Sandown recently should Courtney not be fit in time.

The Supercheap Auto Bathurst 1000 kicks off at Mt Panorama with practice next Thursday, 8 October.

Supergirls pick up the pace