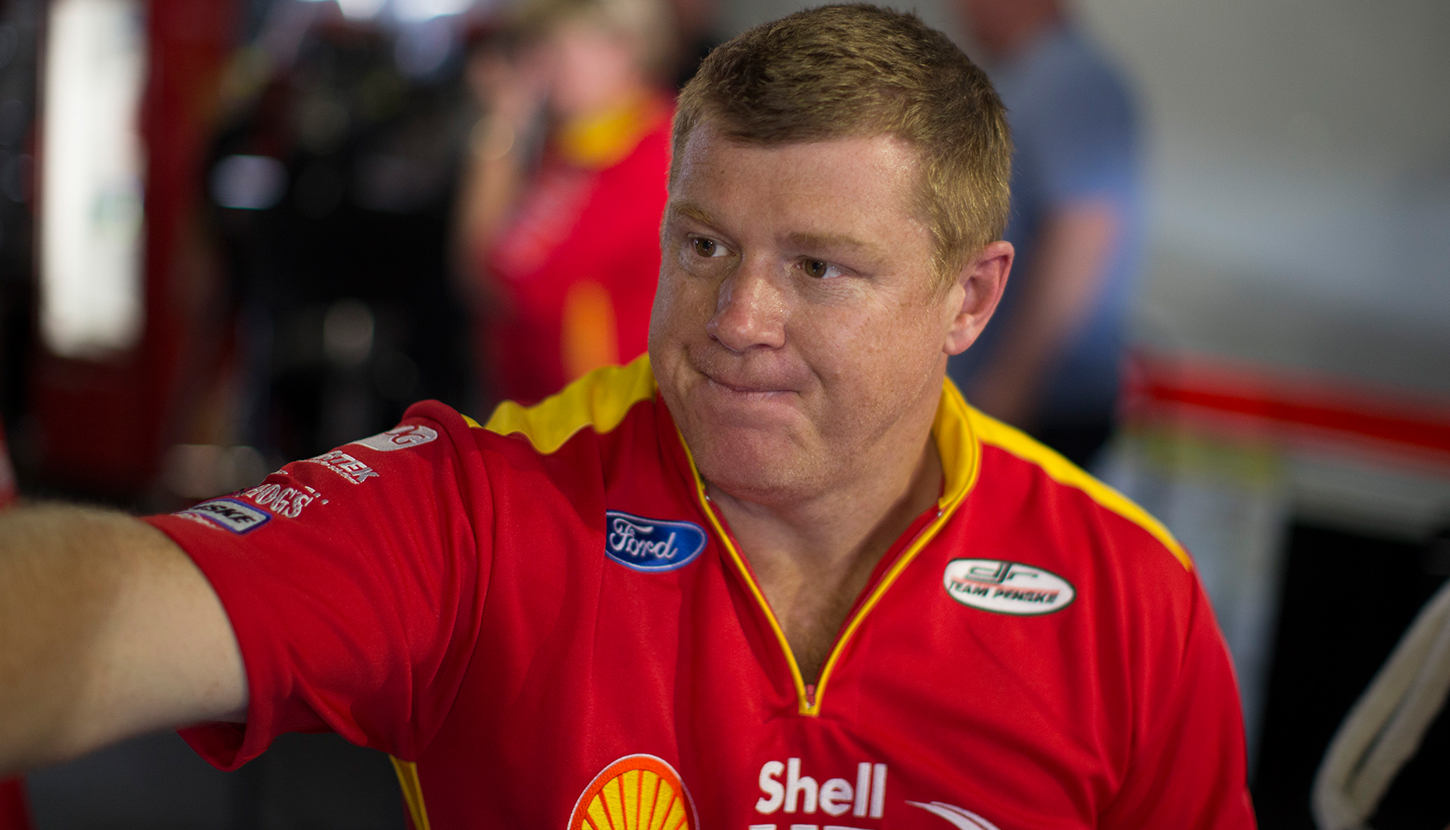 Settling into DJR Team Penske this year after working with Chaz Mostert for his 2014 Bathurst win, engineer Adam De Borre now teams with another up-and-coming star in Scott Pye.

While De Borre says the two drivers are very different personalities, he is confident Pye can take a win this season and deliver victory to the team that expanded to two cars for 2016.

“Thankfully I was able to spend some time with Scott in my customer support engineer position at PRA, so I have known him for a long time,” De Borre said.

“I am enjoying seeing Scott progress and becoming a consistent top performer and an established star in the championship.

“I’m really looking forward to helping him achieve a lot more success in the back half of the year and hopefully crack his and the team first win as DJR Team Penske.”

De Borre is thriving on the challenge of such a close season and the change of scene.

“With every car there is a learning process and it takes time to understand what we have,” he said.

“There are a few subtle differences between the car I ran last year and the car we are running now and they challenge you – which is what you want as an engineer.  However, the game has changed and everyone has taken the championship to another level again and we are stepping up and going our path.  It’s great to be part of it.”

De Borre explained the ins and outs of Queensland Raceway. 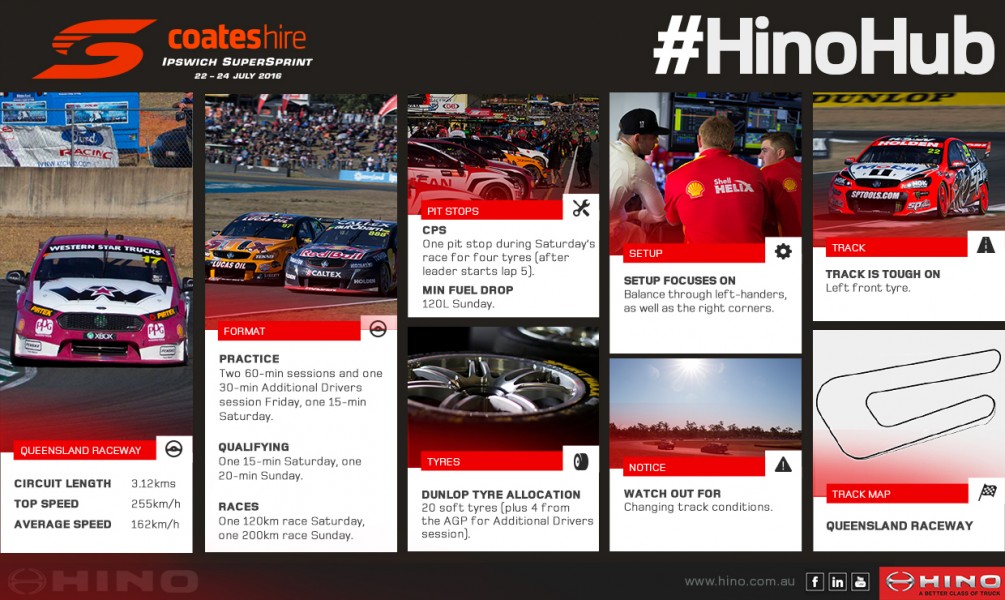 Affectionately known as the ‘paperclip’ because of its shape, 3.12km Queensland Raceway poses a significant challenge for engineers, according to De Borre.

“It rewards good setup,” he said.

“You can generally mask car flaws with new tyres however come race time any issue will be exposed and the cars that win are very well balanced and fast.”

While it is the test track for Queensland-based teams – including DJR Team Penske – that hasn’t always meant a home track advantage in the past.

“Having QR as our test track offers us some luxury that the drivers are familiar with the current grip conditions,” De Borre said.

“We have a solid base, but it’s really dialing the car into the condition you face on the day that’s important. Quite often you don’t do that in testing as you are trying different parts of theories on setup.”

He believes the DJR Team Penske cars will be suited to the track. Pye recorded one of his career best results, fourth, at the circuit with DJR in 2014.

“The balance our cars have in the high speed section should suit the current package as well as the ability to get the front into the tighter the corners,” De Borre said.

Watch out for the left front tyre on the Supercars.

“With the asymmetric nature of the track the left front is loaded for a very long time and because they are quite long corners you’re in the turn for reasonable amount of time,” De Borre said.

“Finding a balance is a constant issue at QR – turns 4 and 5 are the only left corners and are quite tricky as they are both have very different requirements to the rest of the lap.

“It almost makes these corners the most critical for getting a good time in Qualifying as you focus so hard on the majority of the lap, which are all turning right.

“If your car isn’t stable and sharp enough here you can find yourself a tenth of a second off, which can be the difference between five or six positions.”

Even though it is the team’s test track, conditions are changeable at Queensland Raceway, so getting Pye comfortable with the car and grip levels will be important.

“If we can have some entry confidence then it will make the rest reasonable straightforward.

“You want to do a lot of laps in practice so the driver can really dial into the track … if we have a solid platform we can then attack and hopefully be up the front.”

“Come in too soon and ask too much from tyre and you will go slow,” De Borre says, though he believes tyre allocation is good for this event and has been all year.

“Degradation is pretty medium at this event … I feel like it will be similar to what we see at Phillip Island. But that depends on car and when you pit for tyres.”

Teams have six sets of soft tyres to run, including the ‘hand-back’ set for practice.

“This will leave us two sets for Saturday and three sets for Sunday,” De Borre said.

“Generally you will run one new set on Friday afternoon to do a qualifying simulation and learn how the car reacts to new tyres.

Teams also have tyres run at the not-for-points Australian Grand Prix earlier this year to utilise in the co-driver only session.

While the focus in the two hour-long sessions will be about Pye, the team is using co-driver Tony D’Alberto’s experience as well. De Borre engineered D’Alberto in 2011 and '12 when he was competing full-time in the category.

Co-drivers have an exclusive half-hour session tomorrow morning – the last allocated session before the Pirtek Enduro Cup, which kicks off in two events at Sandown in Melbourne.

“Any time you can get your co-driver in the car is a good thing,” De Borre said.

“Tony has a lot of experience and we are utilising his experience to develop our package. He’s doing a great job in the car and it’s good to work with him again.”

After the co-drivers kick off the day, focus will be on dialing the car in for the weekend’s racing.

“Practice as all about getting Scott confident with the platform and to make sure we are consistent and quick even when the tyres start degrading.”

De Borre’s tip for those following along at home tomorrow?

“Focus on not necessarily the fastest but the cars that keep getting faster as the session goes on. This shows that their tyre life is strong as they keep improving.”

“Like I said earlier, new tyres at this track can mask a few issues with the car so you need a confident driver to get a great lap at this place.

“Because of this you sometimes get a car that is slower qualify in front, which can cause all sorts of headaches because in the shorter race it’s hard to pass.”

Expect a few laps on new tyres in the sessions.

“Generally … we will warm the car up and then do two or three new tyre hits. Hopefully building on the previous run to get the best result at the end.”

Teams must stop once to change four tyres in the weekend’s shorter race, but don’t expect everyone to file into the lane as soon as the window opens when the leader starts lap five (given there’s no early safety car).

“This year we have a trend to a slightly longer first stint given we are all on soft tyres,” De Borre said.

“Because the trend is to push hard in every stint we see higher degradation than in 2015.

“The fuel required to do the 120km race is so minimal there is virtually no queue risk so don’t be surprised if you see team cars on the same strategy.”

“If you aren’t leading at the end of lap one you need to run this race as a time trial,” De Borre said.

“Fuel to find clean air, so you’re not battling and wearing your tyres out. This will yield you the biggest gain.

“You have to be careful going too long as gaps disappear very quickly and finding a spot after your first pit stop will dictate your race.”

The first 10 laps are crucial.

“I would expect to see the whole field pit if a Safety Car is deployed on lap one as you can get to the end with one stop to go.”

While the possibility is nowhere near as high as a street circuit like Townsville, never discount a Safety Car, which could change the complexion of the race early one.

“Safety cars are low risk given the walls are set far back and there is plenty of run off,” De Borre said.

“Usually they occur with start line incidents as opposed to events in the race. Having said that they can come at anytime.”