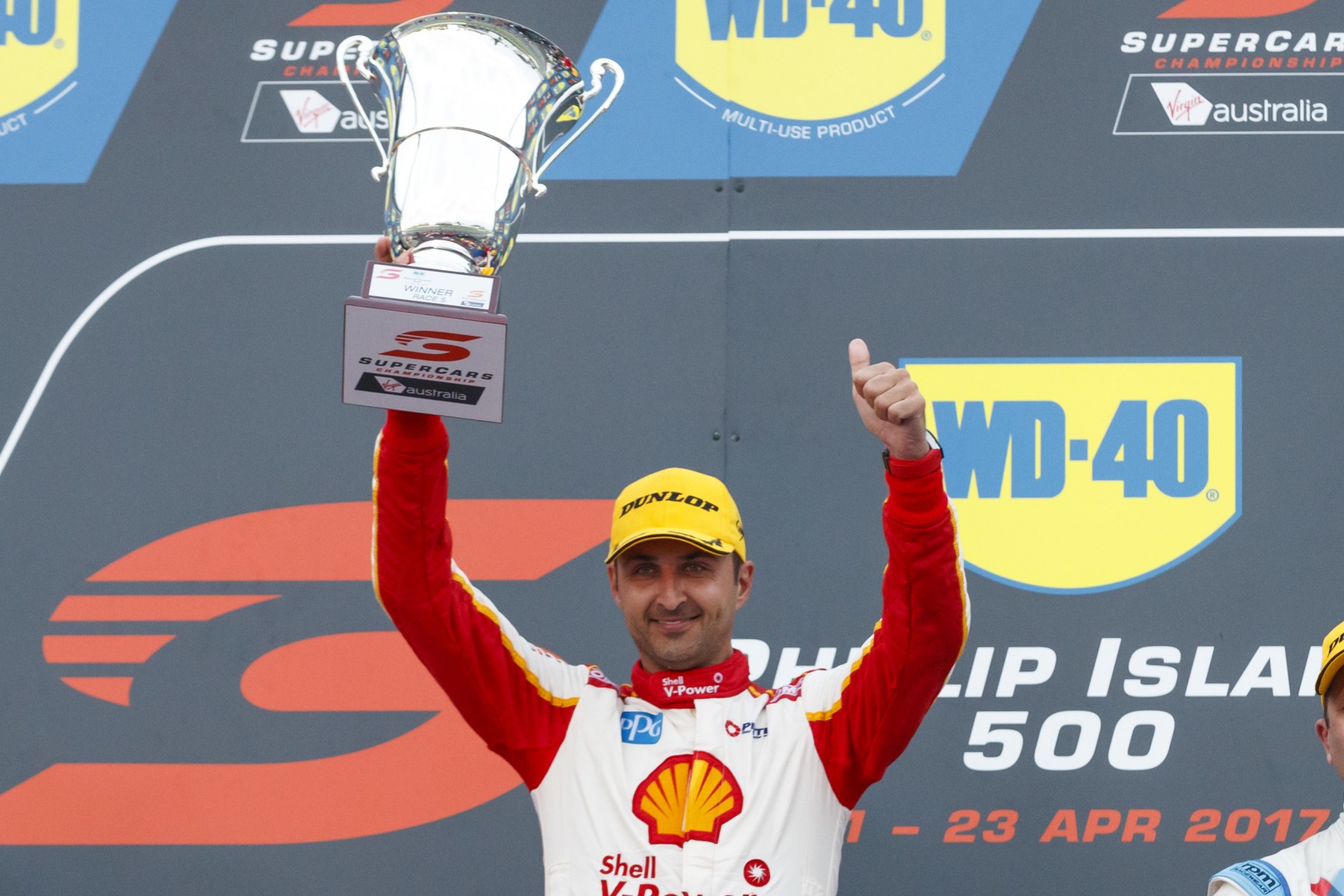 Fabian Coulthard has surged into the lead of the Virgin Australia Supercars Championship at Phillip Island, but he isn’t getting distracted by the points tally just yet.

Coulthard overtook fellow Kiwi Shane van Gisbergen at the top of the standings with his win in yesterday’s 250km opening leg of the WD-40 Phillip Island 500.

The result came despite an early tyre failure that dropped the #12 Shell V-Power Ford some 45 seconds from the race lead.

It was the latest instalment in Coulthard’s run that saw him on the podium in Adelaide, win the non-championship Albert Park event and then take out the Sunday race at Symmons Plains.

“It is early days,” Coulthard said of the championship equation, which would be stacked even further in his favour if not for a 35-point penalty from the Saturday carnage in Tasmania.

“This has been the best position I have been in at this particular time in the championship.

“It is great, but after the enduros is the real time to evaluate how we are going.”

Before yesterday’s chaotic race, the Shell V-Power Fords had already stamped their authority on the event when McLaughlin and Coulthard locked out the front-row.

Now clearly the championship's form team, tyres will again be the biggest hurdle as it shoots for a third straight race win.

Following an extensive analysis of the tyres, the Supercars Commission will meet this morning to decide whether any measures need to be taken ahead of the second race.

Teams must already adhere to a 17psi minimum pressure in the tyres, but aren’t monitored on camber.

“What can we do?” Coulthard said of the situation.

“Every tyre that comes back is destroyed so it is very hard to do some analysis on it.

“That (early in Race 5) was the second one I have had this weekend (following a failure in Friday practice).

“The first one was in bad shape, this one was just as bad probably worse. It is pretty hard.”

Coulthard confirmed that he’d driven more conservatively following his failure in the race and that his team had tried to minimise the risks with its car set-up.

“I think everyone would have been a little bit conservative,” he said.

“My car wasn’t the only car to do a tyre on Friday so I think that gave everyone some knowledge that there was going to be drama and we’d have to do things accordingly.”

22/04/2017
Stay In The Know
Sign up to the Virgin Australia Supercars Championship Newsletter
We use cookies to ensure that we give you the best experience on our website. If you continue to use this site we will assume that you are happy with it.Ok