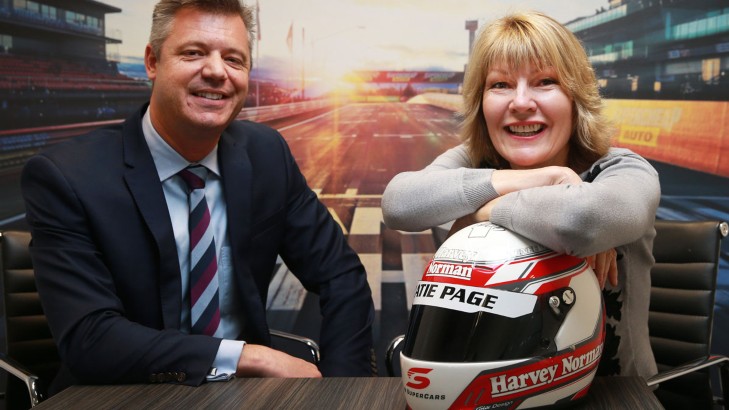 The Harvey Norman Supergirls will be the first all-female team to compete at Bathurst since 1998.

The Harvey Norman Supergirls Falcon FG X will be prepared and run by Prodrive Racing Australia, the current leaders of the V8 Supercars Championship.

Harvey Norman CEO Katie Page said: "We are proud to support women in sport and this is a great opportunity to support two female drivers at one of Australia's biggest sporting events.

"There is no reason why women can't compete at the top level of motor sport in Australia and we want Renee and Simona to be an inspiration to other young females.

"This is going to create even more interest in what is an iconic event and we can't wait to see Renee and Simona tackle Mount Panorama next month."

"To have a brand like Harvey Norman and a leader of the calibre of Katie Page supporting V8 Supercars is very significant for motor sport in Australia," he said.

"We are proud of the critical role women play in our sport from our fans, to our teams and staff at V8 Supercars and we have an obligation to provide a pathway for young females like Renee to have the opportunity to compete at the highest level"

Gracie and de Silvestro will compete as a wildcard entry in the first of a two-year deal to drive in one of the world's most famous motor races.

Swiss-born De Silvestro, 27, has competed five times in the world-famous Indianapolis 500 in the United States and is one of only three women in history to have an IndyCar podium finish.

Queensland-born Gracie, 20, is driving in the V8 Supercars Dunlop Series after two years racing in the Porsche Carrera Cup.

"To have the backing of Katie Page and Harvey Norman is a great honour for me," she said.

"We want to inspire other young females that they can do anything in life. Motor racing is a sport for all and the Harvey Norman Supergirls entry at Bathurst is proof of that."

De Silvestro also thanked Harvey Norman for its support and said she couldn't wait to compete at Bathurst.

"The Bathurst 1000 race was actually the first V8 Supercars race that I ever watched and it looked amazing," she says.

"The track looks great from what I have seen on TV. It looks really challenging and I can't wait to see it for real and to drive around it."

The Harvey Norman Supergirls entry will carry the racing number of 200, recognition of this year's Bicentenary of the City of Bathurst.