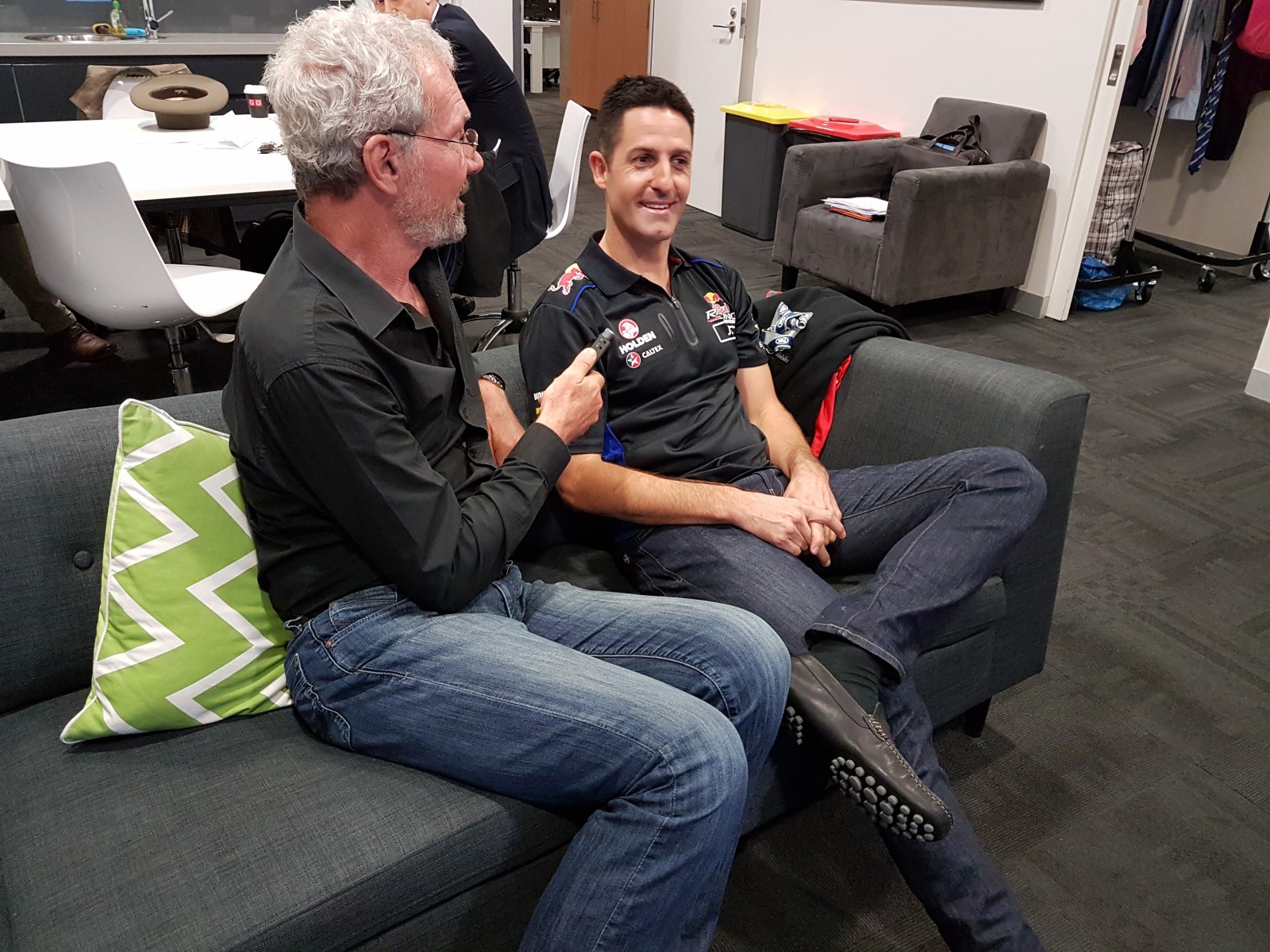 The latest is six-time champion Jamie Whincup, who has figured in the thrilling finishes of the past four Supercheap Auto Bathurst 1000s.

Whincup fended off David Reynolds to put his name on the Peter Brock Trophy for a fourth time in 2012, then narrowly lost an epic late race battle to Mark Winterbottom in ’13.

Controversially, he was beaten in the madcap 2014 Great Race on the last lap after ignoring the entreaties of his Red Bull Racing Australia team to conserve fuel, while his decision not to pit during a late Safety Car period – compounded by a drive-through penalty for overtaking the Safety Car – arguably cost him last year’s race.

Whincup returns to Mount Panorama unrepentant and determined that he and seasoned co-driver Paul Dumbrell will again lay it all on the line to win.

Foges: The last two Bathurst 1000s have been particularly eventful for you. What will you be doing to avoid drama this time?

Oh, I think the last four, in particular, have been highly eventful, which is a good thing. Win, lose or draw, you want to be a contender, that’s first and foremost. To have been a contender the last four times up there is something I’m really proud of and, hopefully, I can continue that, as opposed to going there with a negative approach of making amends or rectifying what happened the past two years. You know, first and foremost, I was a contender, which is great. So we’ll try to do the same thing this year and be a contender. And, hey, I don’t regret the things I did the last two years. I did them for a reason. With the information I had to hand at the time, they were the right calls, so I stand by them, as I did at the time and as I do now.

So your approach is just go hard from the start rather than holding back until the last hour?

Yeah. Of course, you have to be there at the end, but gone are the days of a one-hour race – you know, of just circulating for five hours and then race hard at the end. It’s a six-and-a-half-hour sprint race, in a way, these days. So it’s a balance, but you have to go hard from the start. I think why you asked that question is because of my first stint in 2014. But when you start from the back of the pack (off the back row from 25th), you have to do something, you have to go hard from the start. We put big pressure on ourselves all day, but we were very proud that we were there at the end of the day and it just wasn’t quite right.

The Sandown 500 was a big opportunity lost, wasn’t it?

Yeah, well, we started from the front row and we led the race until we made a couple of errors. That’s motor sport. We made some errors; we’re not trying to hide behind them or make excuses. They were our errors – ours to deal with and ours to rectify and make sure they don’t happen again.

To be blunt, it was one major error by Paul Dumbrell (releasing harness before coming to a halt for a driver change) that cost you victory. But that aside, it must be a good sign going to Bathurst that you were so otherwise dominant at Sandown?

Yes, but our strategy was another costly error, Foges. We should’ve pitted on that lap 54 Safety Car. But as far as car speed goes, we had enough pace, I believe, to win that race, which is good. That doesn’t guarantee we’ll have enough pace at Bathurst, but we shouldn’t be far away.

And, of course, like any year, but probably more so this season, Bathurst is going to be crucial in the championship battle, isn’t it?

It’s critical, yes, but no more than any other year. It’s 300 points on the nose. We had a handy buffer going into Sandown, then boom! We didn’t just lose our buffer, we lost the lead, so it just goes to show how important these big races are.

You don’t think that, more than ever, Sunday could be make or break for the championship?

Are you enjoying this battle you’re having with Shane van Gisbergen?

Absolutely. I’m enjoying being teammates, basically. We’re working together, we’re 1-2 in the championship. We’re in a good place.

Of course, we’re all hoping for more fireworks, with many in the media predicting that at some stage it’ll all blow up. Will it?

Oh, I can understand everyone just desperately wanting us to have a major blow up. It would make a lot of people that don’t like us very, very happy. But, unfortunately for them, from where I sit, it’s not close to happening.

Yeah, it’s been amazing. I think the Aussie tall poppy syndrome is behind the expectation that Shane and I will take each other out. There are a lot of people out there who would really enjoy seeing us run into each other and fail as a team. So it’s up to us to make sure that doesn’t happen.

By your standards, I would say that this year – although not as much as last year – has been an up-and-down season so far. Is that right – and if so, why?

It’s definitely been up-and-down. No one’s really put in a consistent, solid performance, especially at the start of the season. Everyone was still finding their way.  Don’t have an answer for that, I honestly don’t. I probably haven’t spent enough time trying to analyse why it’s been so up-and-down, but it has been and at the end of the day, that’s been fantastic for the fans, while it’s been a bit of a headache for the pit lane.

You’ve acknowledged that there were tiny weaknesses in your and the team’s approach last year, but you’re satisfied those shortfalls have been addressed this year?

An interesting development is that you’ll be competing in next year’s Liqui-Moly Bathurst 12 Hour. What made you decide to finally to do the event?

The opportunity. I’ve always just waited for the right opportunity and I felt that the Maranello Motorsport/Triple Eight combination (running a Ferrari 488 GT3 for he and Craig Lowndes) was the right opportunity for me. Turning up with Lowndesy, who has a lot of experience in that race, he’ll be able to somewhat help me through the process. I feel there’s a lot of opportunity there, so I grabbed it with both hands.

Why did it take so long for someone to offer you a drive in the Bathurst 12 Hour?

A few people had approached me, but I made it pretty obvious that I was waiting for the right opportunity. It’s not what you think. Team owners don’t ring around looking for drivers. It’s very rare that an employer will ring up and employee. It all comes from the potential employee doing the work and instigating the conversations to gain opportunities. So we’re no different to the real world. You have to make your own opportunities, not wait around and hope they fall in your lap.

How is the cash wash/café (LOCA in Hope Island on the Gold Coast) going and how much time does it require?

It’s going really well – definitely well above expectation. Hey, it’s taking up quite a bit of my spare time, so I haven’t been on many holidays. But all in all, I’m enjoying the experience and really understanding what it’s like to try to earn a living in the real world. I’ve been in a pretend world in motor sport – being a racing driver and very grateful for it – but I won’t be a racing driver forever. I’ll be in the real world and this is the start of that.