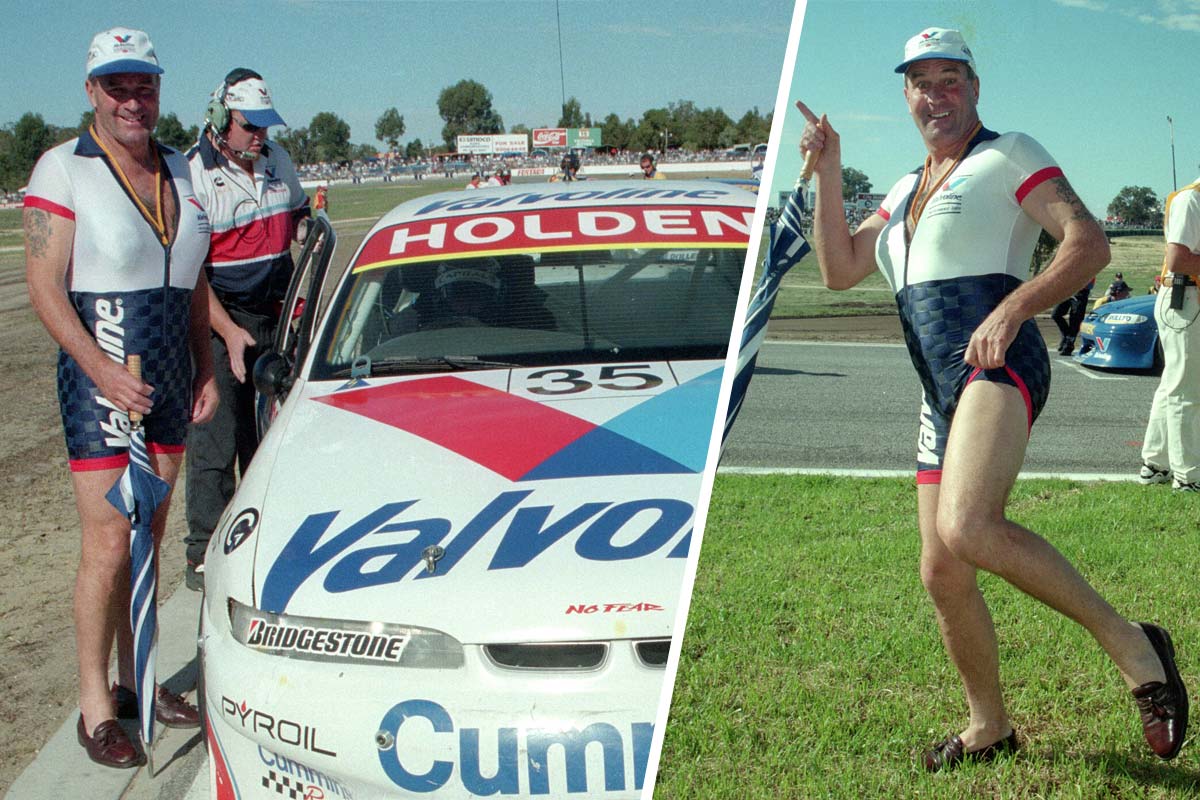 Never let it be said that Garry Rogers Motorsport didn't have a bit of fun during its time on the Virgin Australia Supercars Championship grid.

Ahead of its Supercars farewell at the Coates Hire Newcastle 500, we're looking back at some of the ways the team injected a bit of frivolity into the category.

To his credit, team owner Garry Rogers has always led from the front. 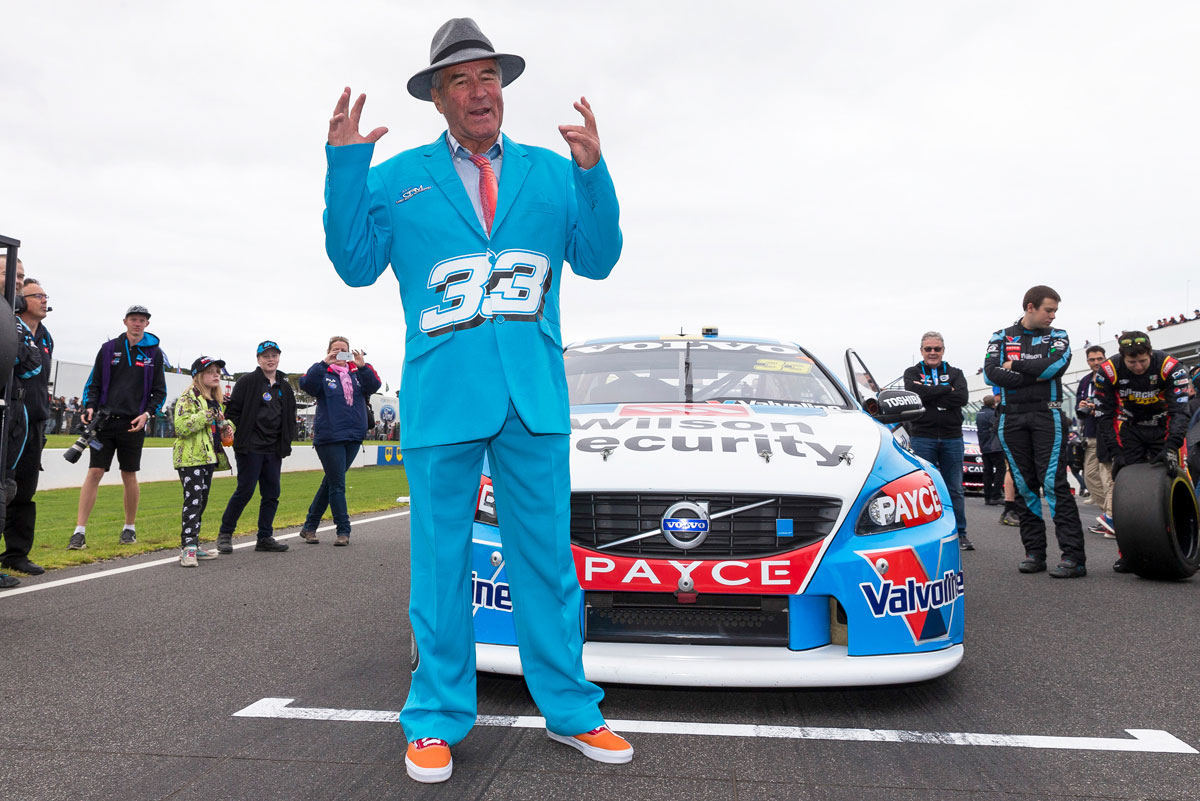 GRM's breakthrough 1999 season, where drivers Garth Tander and Jason Bargwanna took multiple race and round wins, saw the squad ramp up its skits on the grid.

The topic often revolved around the news of the time, ranging from Prince Charles and Camilla Parker-Bowles' debut as a couple… 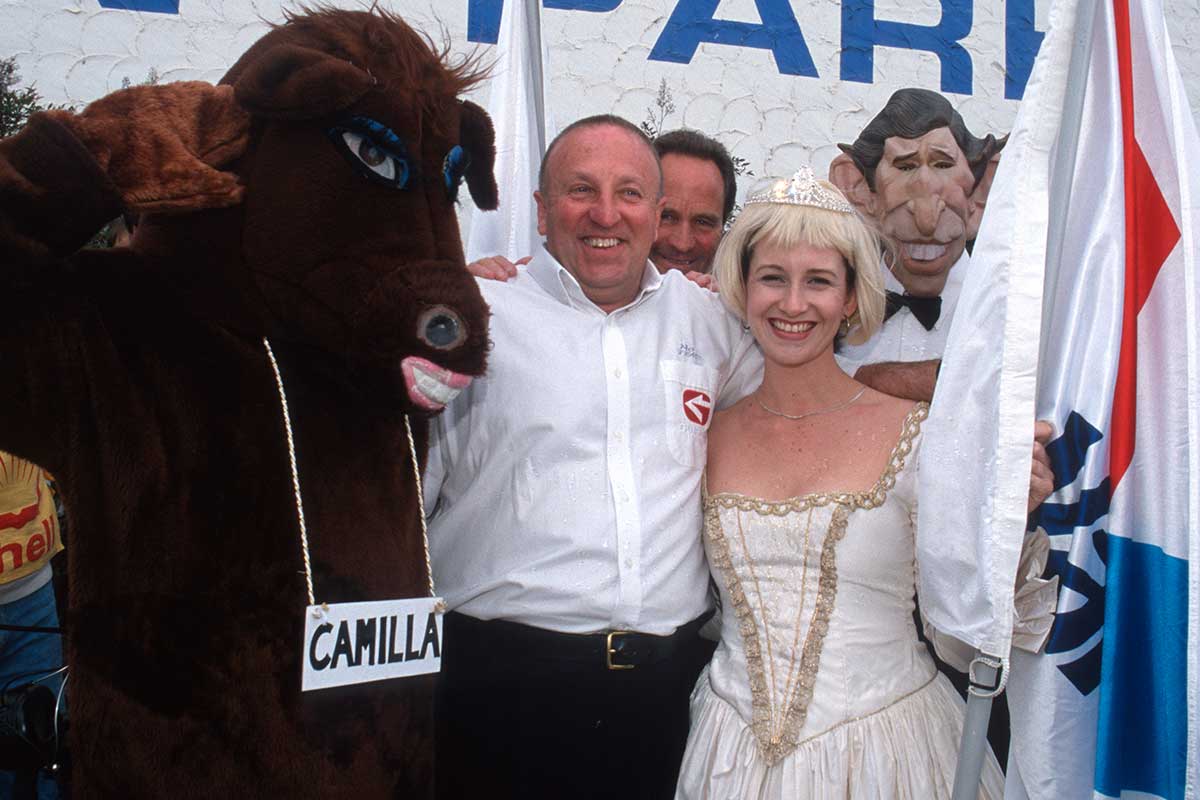 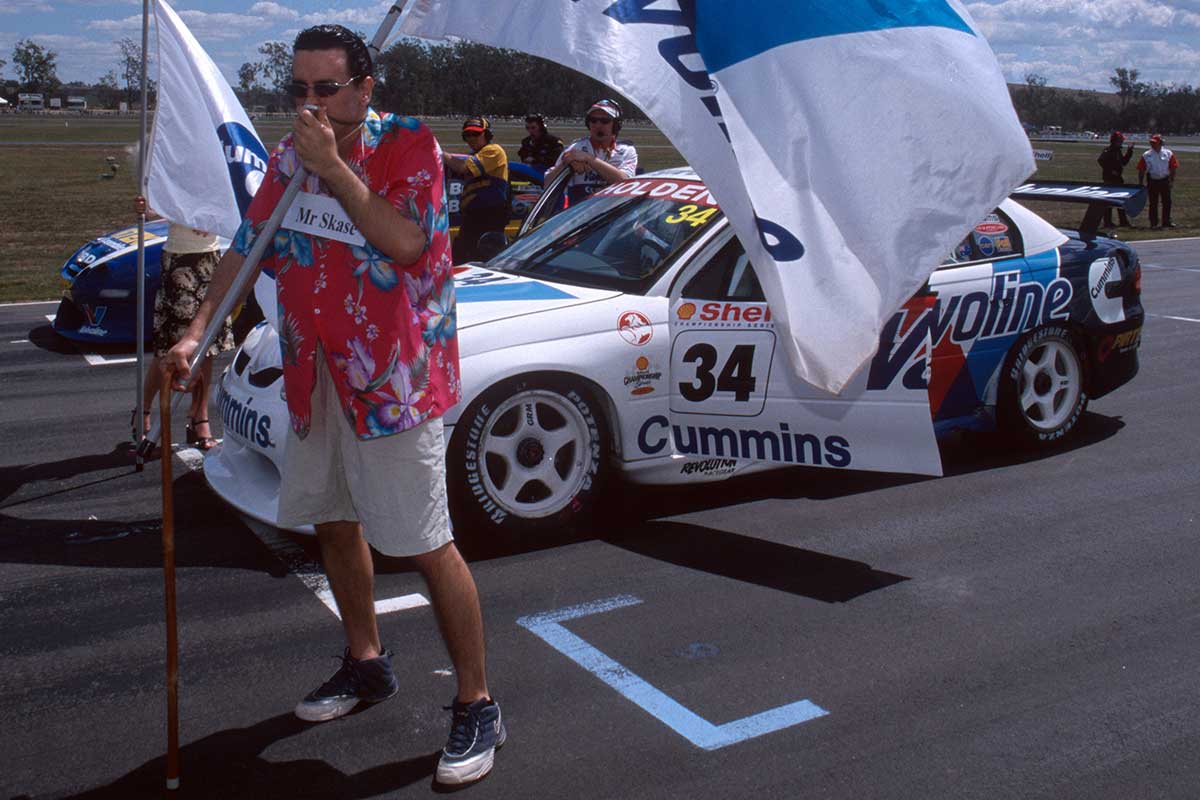 …and the impeachment proceedings surrounding the then-President of the United States, Bill Clinton. 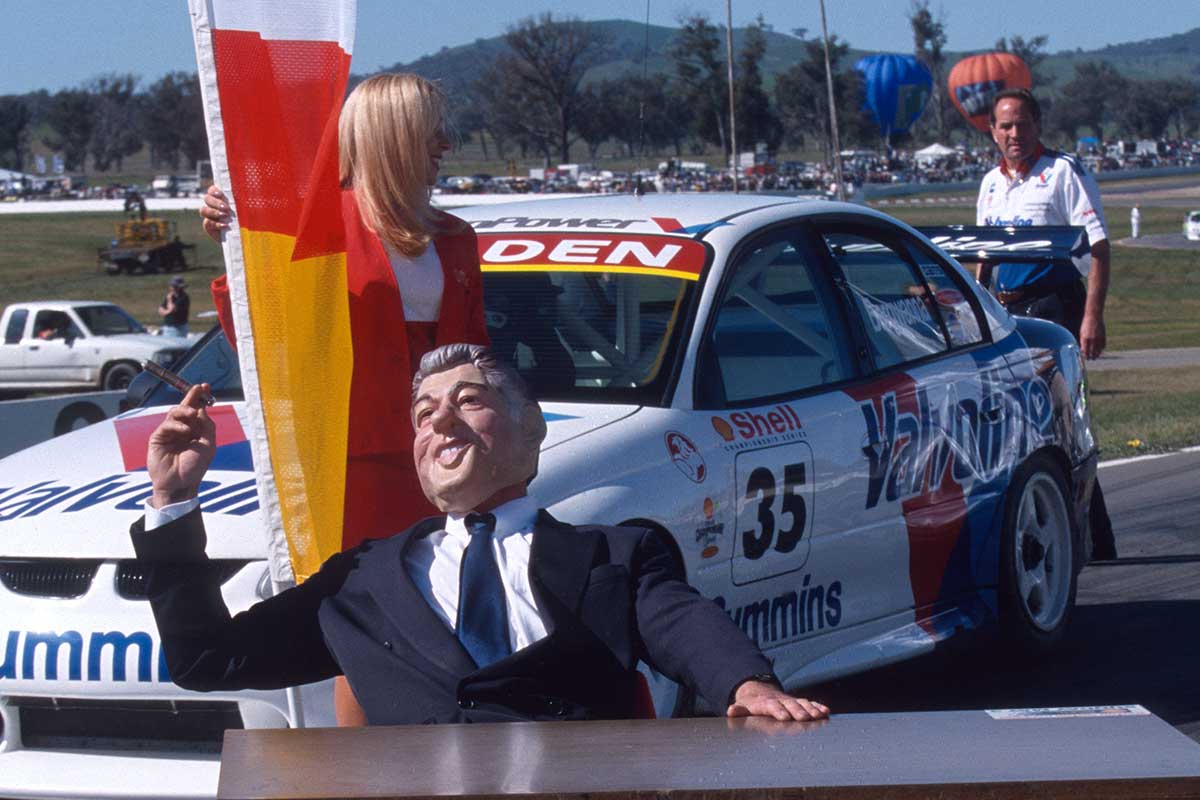 While the pre-race skits were toned down in the following years, the spirit of cheekiness never left the GRM garage.

Witness the 'squashed frog' decals on the headlights of the GRM cars at the inaugural Sydney Telstra 500.

That was a nod to one of the environmental concerns raised ahead of the Homebush Street Circuit's maiden Supercars race in 2009. 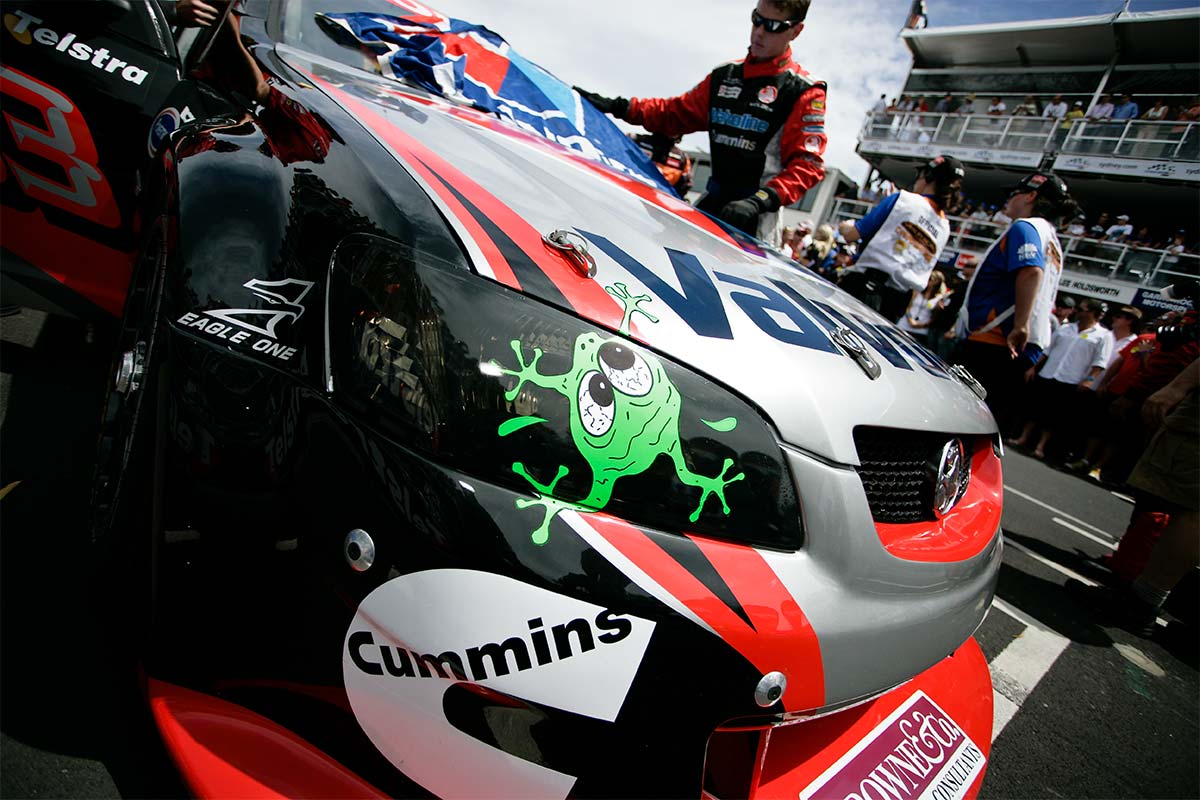 Even having a car too damaged to take the start didn't stop GRM from having some pre-race fun.

For the Sunday race at the 2012 Gold Coast 600, they rolled out the remains of their #33 entry – unable to be repaired after a roll-over crash the day before – into pitlane to take part in the driver introductions. 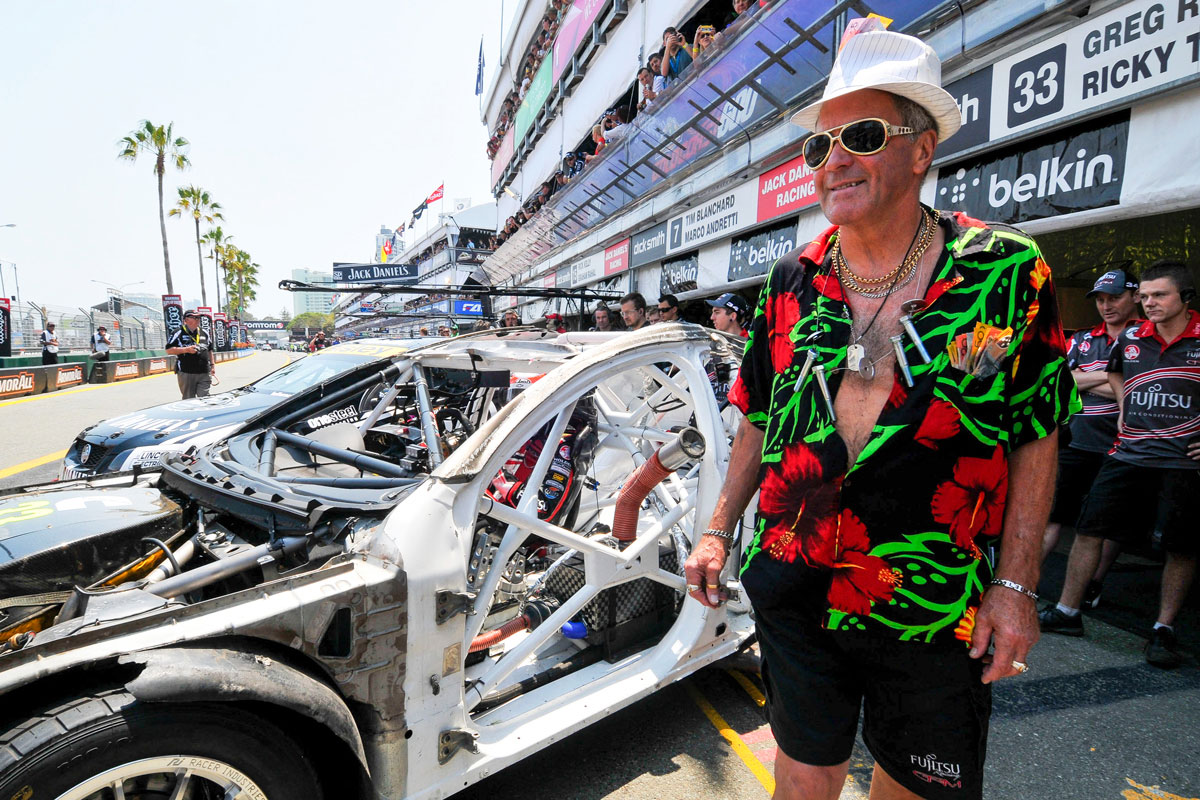 That 'Hawaiian' shirt that Rogers wore wasn't a one off. In fact, the brightly-coloured floral getups were a GRM crew tradition at the Gold Coast 600, with even the drivers getting involved in 2013. 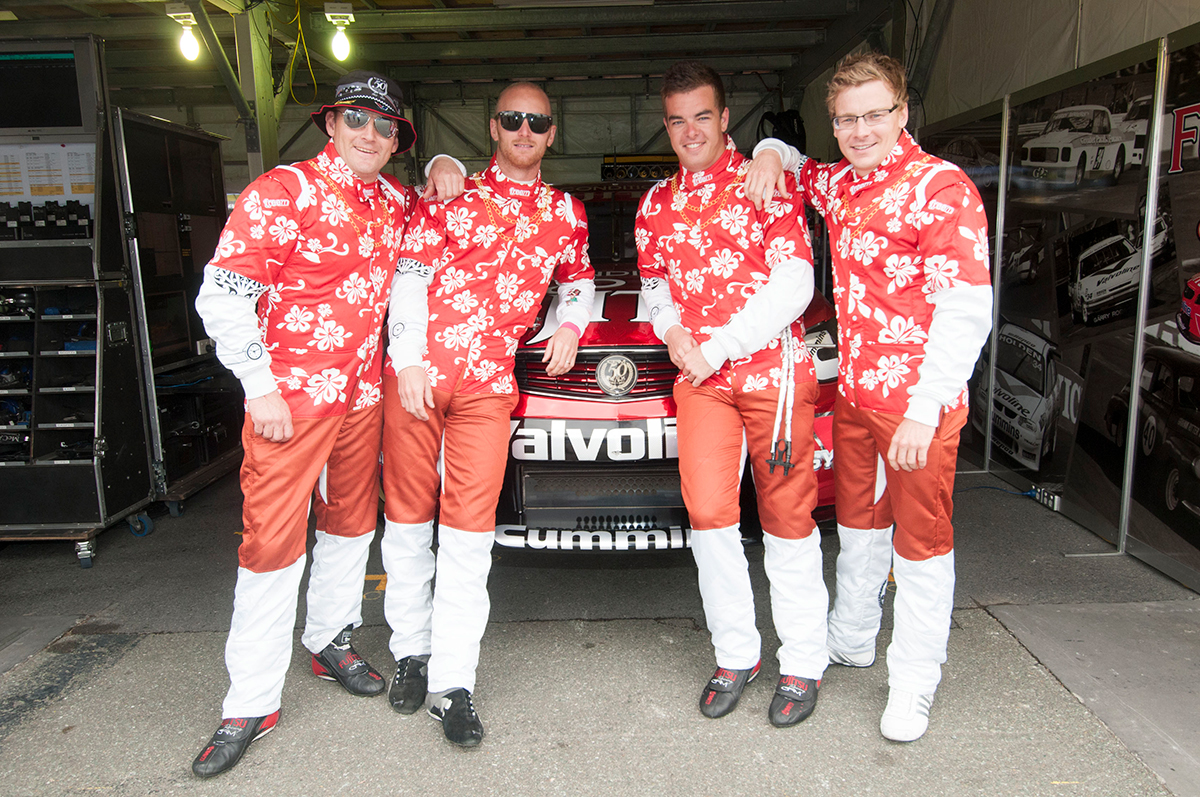 The GRM crew certainly didn't mind a bit of fancy dress at a race meeting.

Or even on the way to a race meeting, if you remember the shenanigans of their team road trip to Bathurst in 2014. 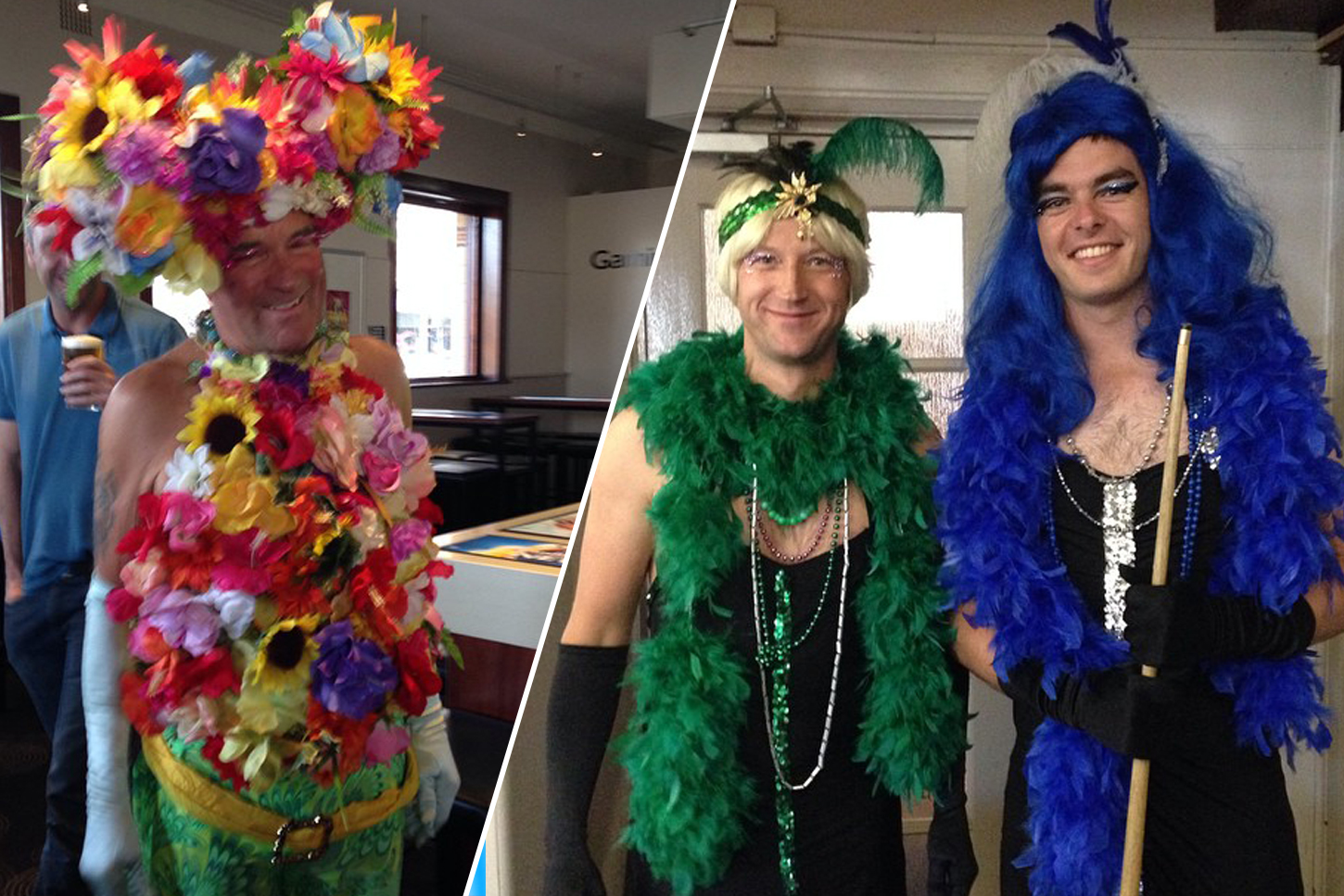 The creation of a 'retro round' theme for the Sandown 500 was always going to be something that Rogers' team would take to heart and, with the exception of 2019, GRM always had something special to roll out for the weekend.

One of their best efforts came last year when, along with the retro liveries inspired by race cars from Rogers' past, the team wound the clock back in its attire by adopting tight white shorts and terry-towelling hats. 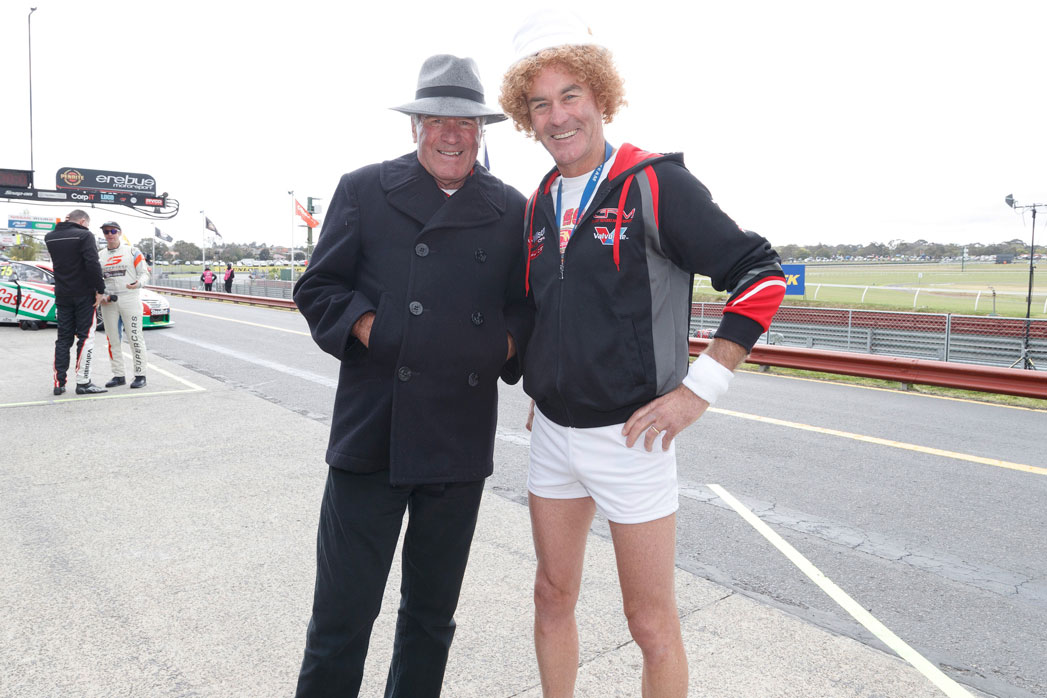 Even their lunches went retro, with the crew chomping down on Chiko Rolls and potato cakes during Friday practice! 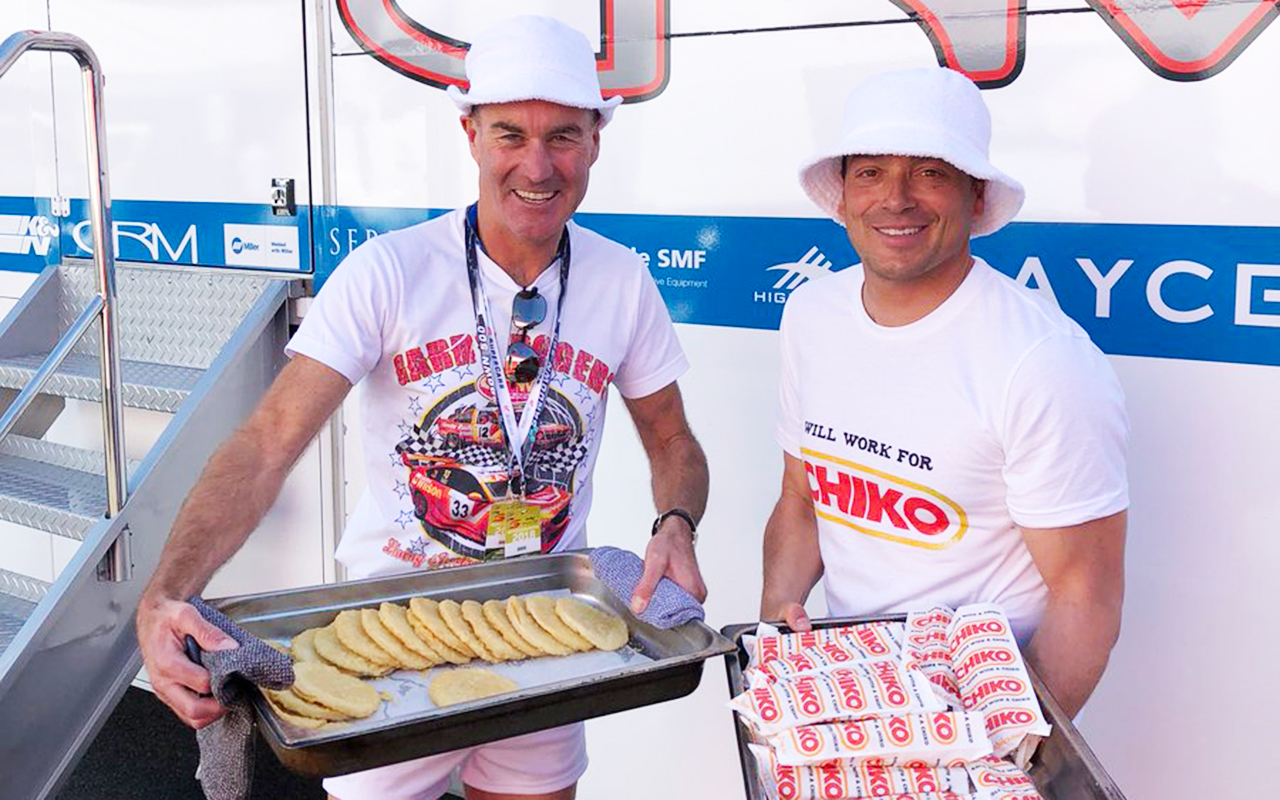 This year, Rogers was up to his old tricks at Symmons Plains, donning some colourful lycra and riding a bicycle around on the grid.

That came after Rogers, in defence of his driver Richie Stanaway, had slammed the “café latte/bike riding set of drivers who are all buddy, buddy.”

“As a sport we need to get fair dinkum, because vanilla is boring,” he declared at the time. 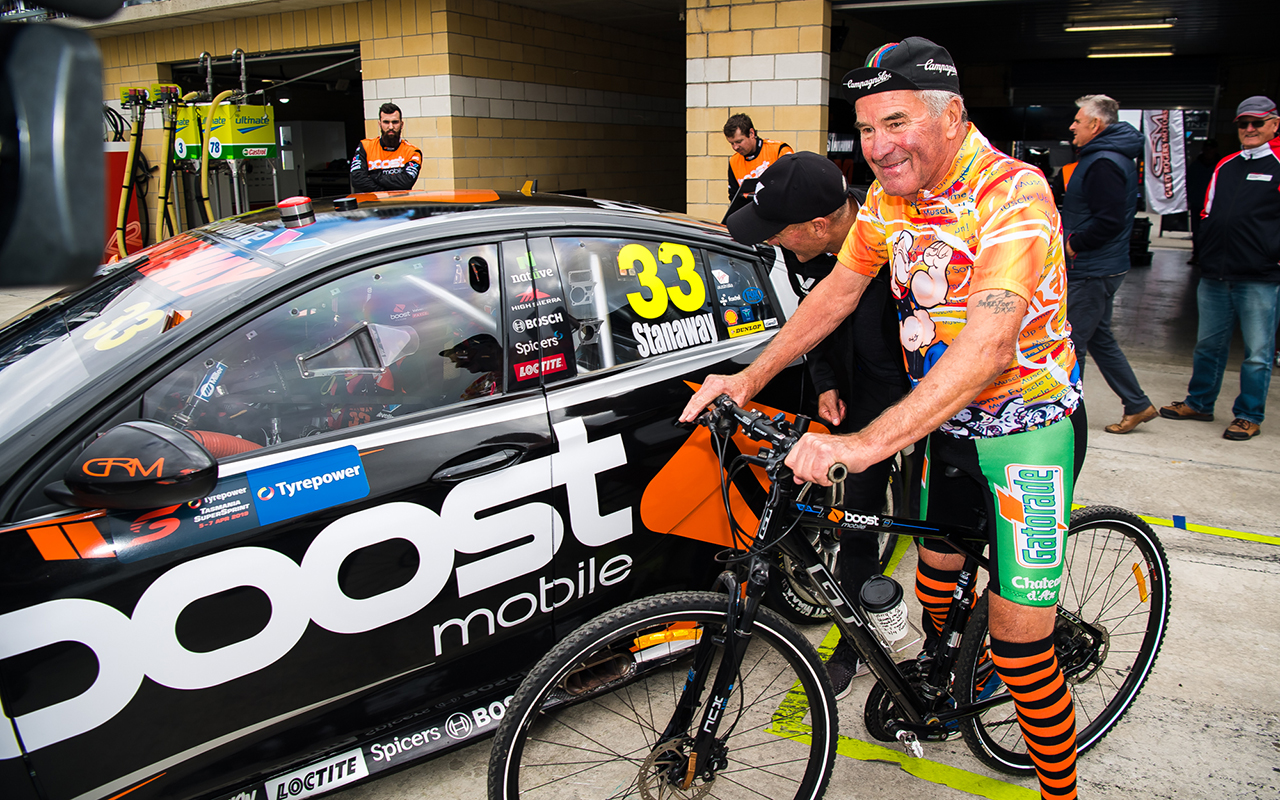 However, one GRM grid stunt stands head and shoulders above all others the team carried out across its time in Supercars.

Cast your mind back to the 2014 Supercheap Auto Bathurst 1000, the team's first trip to Mount Panorama with the Volvo S60.

There were plenty of people bemused by the wooden box that the crew wheeled up to third position on the grid, alongside where the team's #33 car of Scott McLaughlin and Alexandre Premat was due to start.

It turned out the wooden box was a 'sauna' – and no guesses for who was inside. 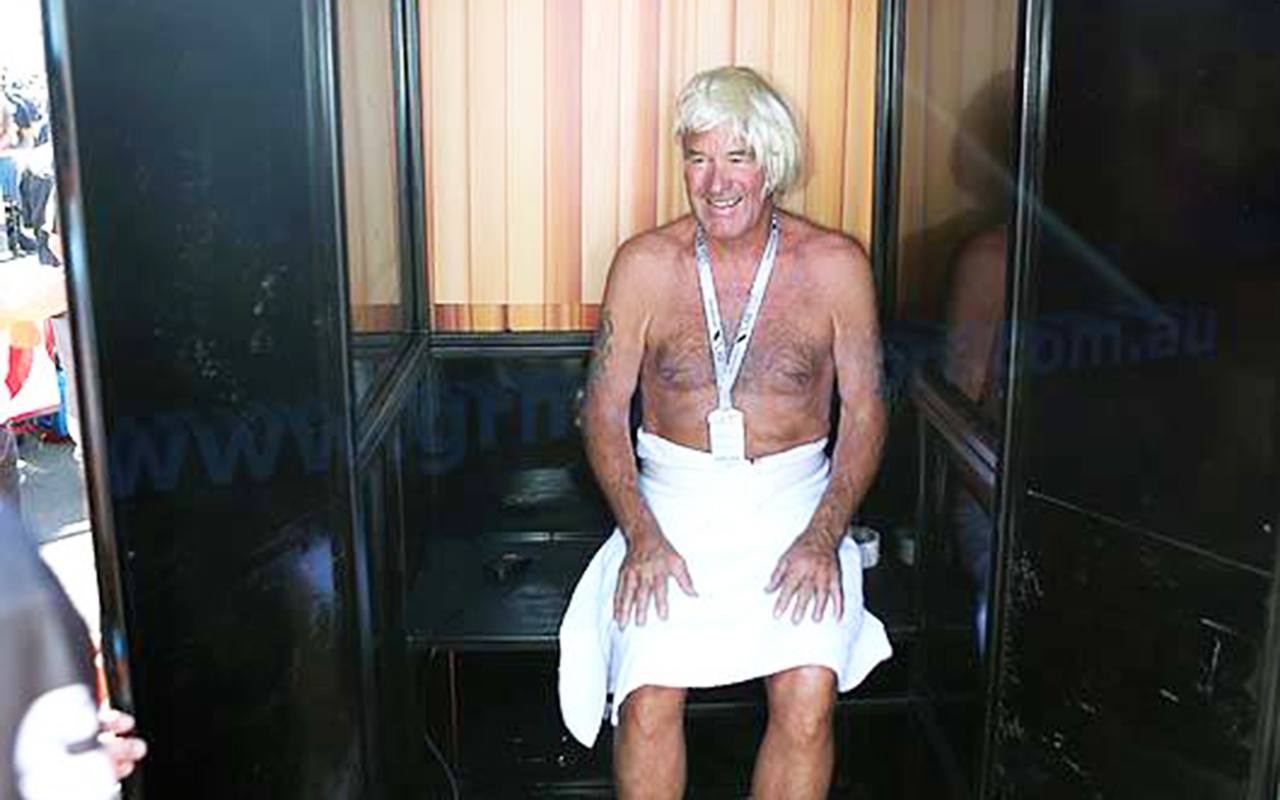