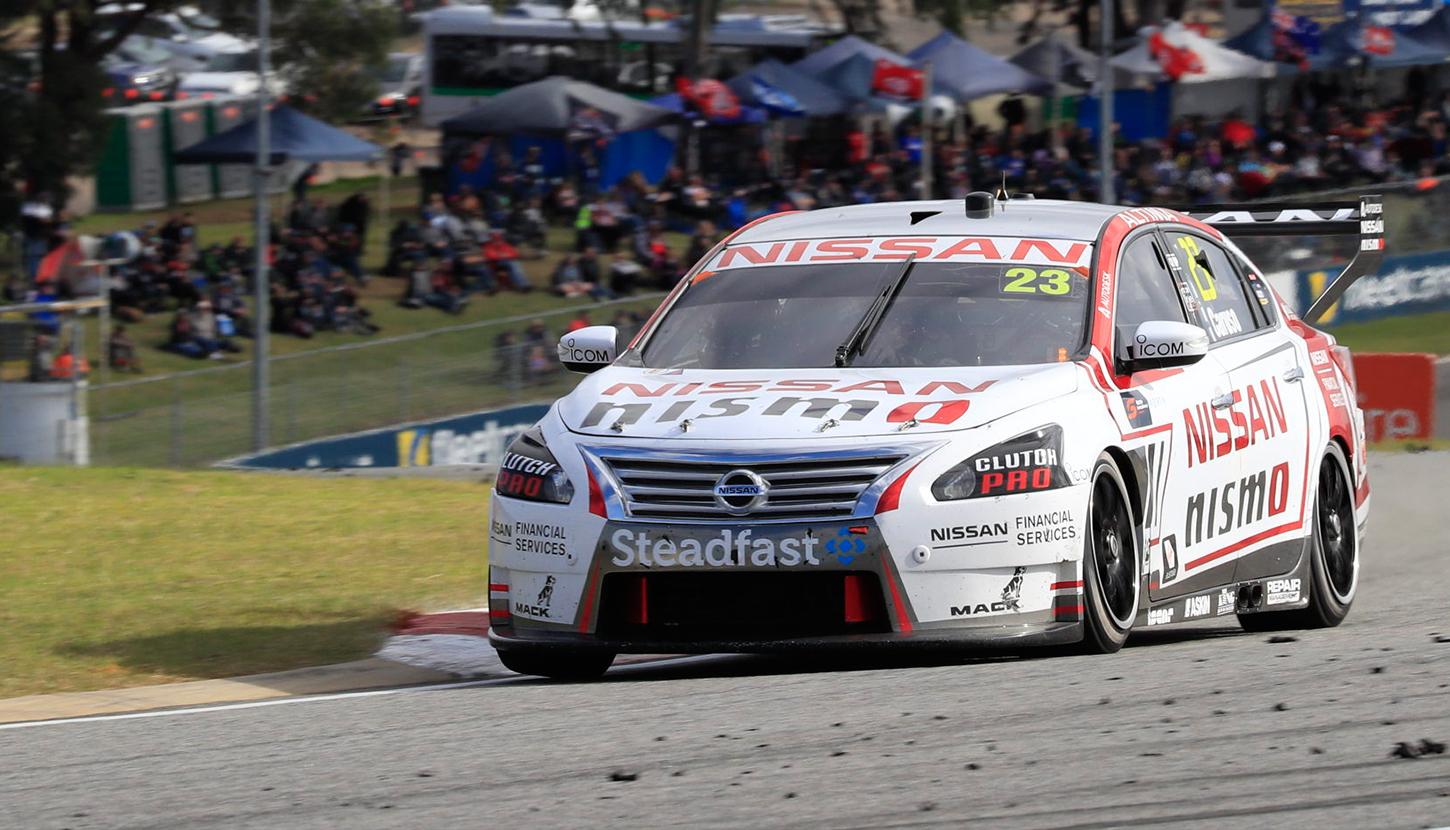 A podium result last year at Winton and a streak of consistent performances means Nissan is confident of a big result soon.

Michael Caruso’s engineer Steven Todkill is hopeful heading into this round, with Winton one of the circuits that really suits the Altima.

The squad tested at Winton before the Perth round, giving them the opportunity to sample the new surface, which should throw up new lap records this weekend.

“I think we definitely have an opportunity to do well at Winton,” Todkill told supercars.com.

“There has been a Nissan challenging for a top five result at every round this year and we continue to work very hard to get all four cars up there.”

While the Nissan Motorsport entry is sitting 10th in the points standings, Todkill believes there is more to come.

“It feels like the package we have now is not too far away from being capable of being a consistent podium challenger. There are obviously still a few deficiencies in the car, but we know what they are. If we managed to get on top of them, we can definitely finish the year higher than where we are now.” 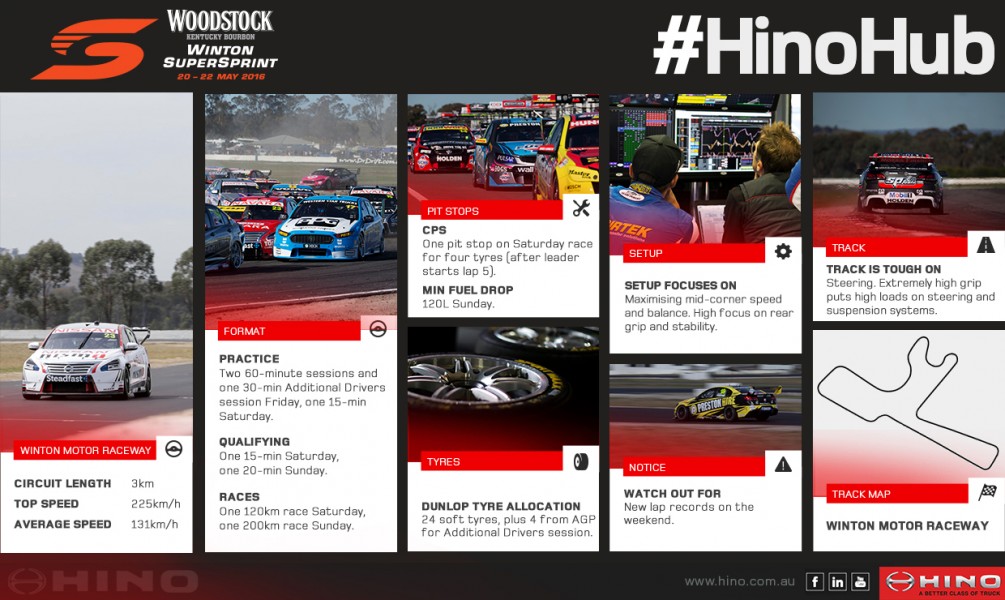 “With short straights and relatively small braking zones the circuit has always been a little unique,” Todkill said.

The 3km circuit has generated plenty of attention given the recent resurface and rumoured lap times from the test day a fortnight ago. Fabian Coulthard currently holds the qualifying lap record, a 1min19.6538 set in 2014 when the track was patched with a grippy sealant.

“After being recently resurfaced it is now has more grip than any other circuit, making the track even more oddball,” Todkill said.

“The circuit is made up of a good mix of second, third and fourth gear corners that really test the balance of the chassis.”

Nissans were on the podium last year and Winton is the site of the marque’s Supercars race win.

“In years gone by we have always enjoyed going to Winton. Low top speeds allowed us to hide the straight line deficiency we had.”

Todkill flagged a potential issue, given the new surface.

“With no significant kerbs and relatively small braking zones, the track has always been fairly easy on the cars.

“However at our recent test day we did notice that the extra grip has loaded our power steering system to a point we haven’t seen before.”

He explained the more common drama they’ve seen at Winton.

“Because the drivers choose to run on the limiter rather than pull the next gear in various spots on the track, we have seen driveline issues creeping in as the weekend goes on, particularly with the transaxle.”

Setup, as always, requires some compromise.

“It’s not a track where you need to worry about things like kerb riding and big braking zones.

“Focus is on stability on corner entry, good mid-corner balance and loaded rear grip on exit. The mix of low, mid and high speed corners makes it a challenge to find the right compromise.”

Todkill says there isn’t much variation for using tyres over the weekend, but again, the resurfacing creates a different consideration.

“Degradation definitely used to be a significant factor at Winton – now that the track has been resurfaced this may change,” he said.

“We won’t know exactly what degradation is going to be like until we do a race run on the new surface however, I would expect degradation to be comparatively low.”

Across qualifying and racing, there are five sets of tyres per car.

“It is mandated that we have to run two sets in the Saturday race, which leaves three sets for the three stint race on Sunday, fairly straight forward.”

During the additional driver session, teams must use tyres from the Australian Grand Prix event.

Nissan has confirmed all four co-drivers for the squad and car #23 will have Dean Fiore on Friday for the additional drivers session.

“We look forward to having Dean back in the car this weekend for the co-driver practice.

“We will do some initial tuning with him in the car, his feedback is good so we can get a head start on some tuning item for Michael’s session.

“The focus of practice will be tuning for the weekend rather than testing new components and ideas.

“A premature end to our recent test day meant that we didn’t do as much soft tyre running as planned so we did not get the opportunity to play with setup as much as we had hoped.”

Todkill believes Friday’s second practice session will be a form guide for the weekend, so fans should pay attention to the results from that second hour-long run.

“Everyone has a handback set of tyres to use on Friday, so by the end of practice two everyone will be on equal tyres so we will have a good idea on who’s going to be quick.”

Qualifying, as always, will be important.

“The Saturday race does not allow much freedom in the strategy, so starting close to the front is critical. Also, if degradation is low as expected it will making passing difficult,” Todkill said.

The race requires one pit stop after lap five. When teams stop will depend on degradation, but the Nissan engineer believes it will be pretty straightforward on Saturday.

“If degradation does end up being low, tyre life won’t come into it as much as finding clear track if you’re quick, or covering other cars off your slow.

“I expect that cars will start pitting when the window opens, especially to reduce the risk of double stack if they are behind their team mate.”

On the flip side, there is a lot to consider in the longer race on Sunday, with teams taking on 120 litres of fuel, which means at least to pit stops.

“Unless something unique happens with the safety cars, we have a lot of freedom in how we take the 120L fuel drop.

“How your race plays out depends largely on what the rest of the field chooses to do, so deciding where to position your car for that second stint is critical.”

Todkill explained the ‘critical lap’ and options to refuel during the race.

“Our first window opens on lap one – it seems strange but is a result of the tank size, race length and fuel drop being sized to enforce two stops. The basic range of a Supercar is about 125km so we can make it home from before half way, approximately lap 25.”

Teams will be wary of the double stack on Sunday.

“During race two, the risk and consequence of double stacking is high.

“To minimise this risk a lot of cars will try and offset their strategy from their teammates strategy by stopping early or putting in different fuel quantities.”

The Virgin Australia Supercars Championship hits the track tomorrow for practice – click here for all the details.