It would be interesting to watch Scott Pye walk down the street, dodging all those black cats, ladders and mirrors. Seriously, whether you believe in luck in motorsport or not you’ve got to agree he’s not having good time at the moment.

Three out of four big accidents he’s had in Supercars have been the result of mechanical failures and nothing to do with him making a mistake. Technical issues with DJR Team Penske Falcons have twice put him in the wall, the first time at Bathurst last year he suffered fractured ribs.

At least last Saturday he was uninjured and able to race the same day. In between those two crashes he experienced the high of being re-hired for the 2016 season and then, just weeks ago, the low of learning he was being dumped for 2017. 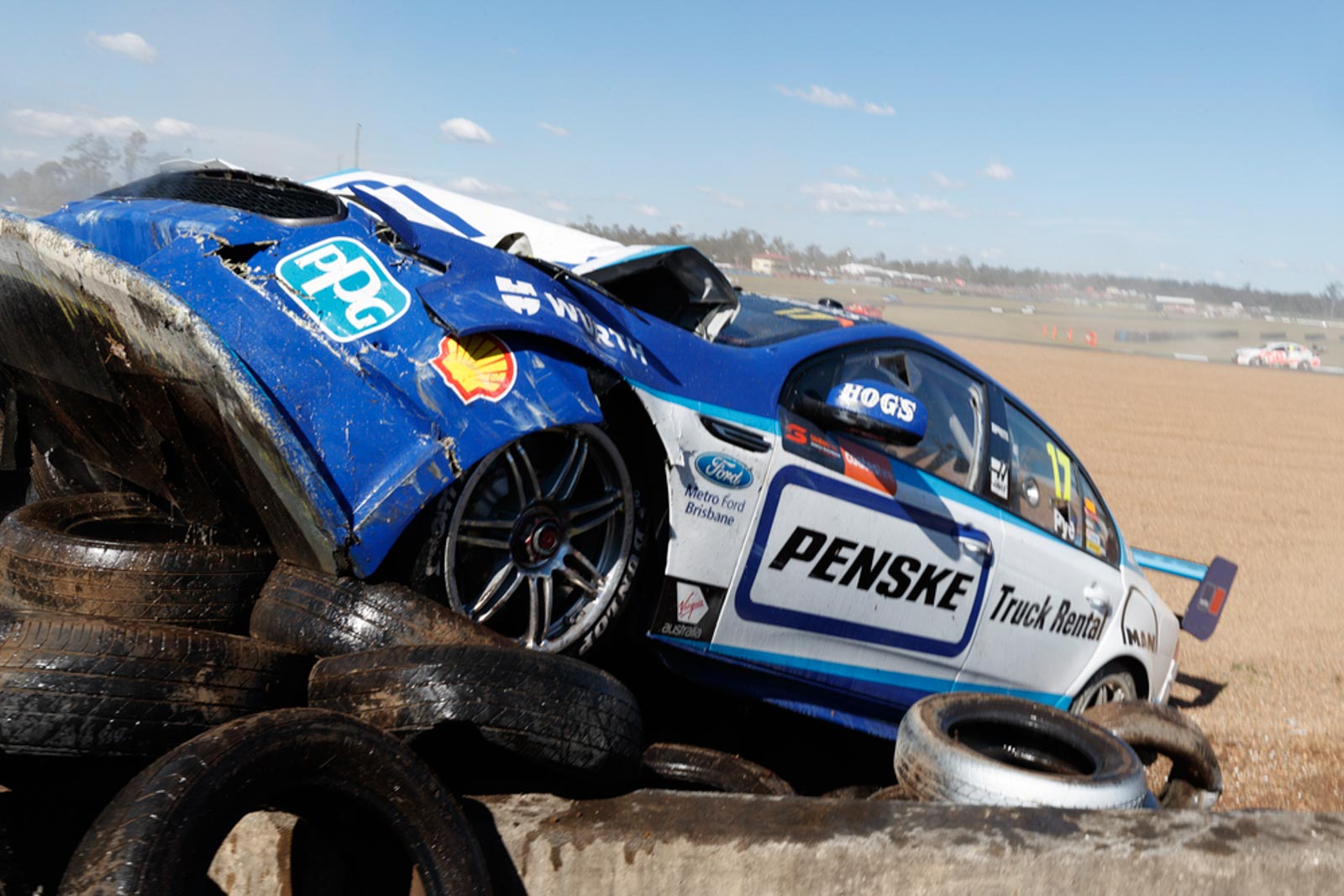 Pye’s misfortunes were a significant part of a disappointing outing for the American owned team at its Queensland Raceway test track. From the outside looking in progress has stalled and the answers that will resume progress need to be found quickly.

Quite rightly, as a team that has championship-winning ambitions, it has embarked on its own test and development programs separate to Prodrive Racing Australia in 2016.

But sometimes that process results in time wasted heading off down a blind development alley, losing time and speed to rivals who are on the right track.

On top of that Pye’s mechanical failure demonstrated again that the expanded 2016 team structure still has process issues to sort out.

As a result, Jamie Whincup has now held the championship lead through three different events and his Red Bull team-mate Shane van Gisbergen has climbed through the pack to be second. The New Zealander also has double the wins (four) of any other driver in the field.

Meanwhile, over the fence at TeamVortex Craig Lowndes and engineer Ludo Lacroix are showing themselves to be a potent combination. The signs are there that the popular veteran will again be a title threat come the end of the season.

So despite the ‘teething’ issues that were widely expected and have occasionally surfaced, the Queensland squad’s expansion is going pretty darn well. 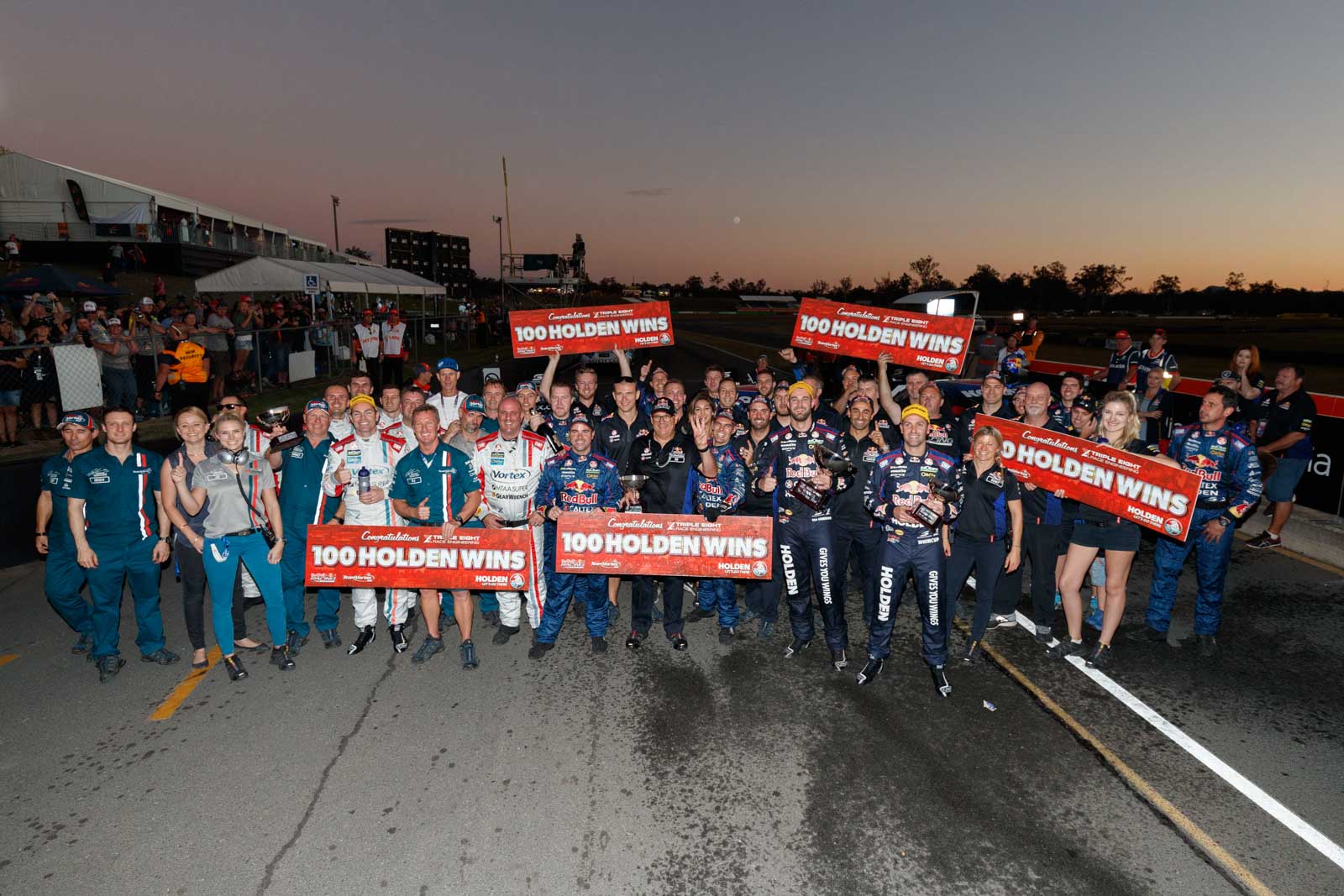 Dutto: nothing to see here…

Interesting just how emphatic T8 team manager Mark Dutton was on Inside Supercars last night, insisting there was no reason intra-team harmony could not be retained between Whincup and van Gisbergen and between Red Bull and TeamVortex.

Only time will tell if he’s right but there’s plenty of people along pitlane who suspect cracks will appear as the season progresses and the championship fight gets down to the pointy end.

There are also some rival drivers and teams who will need to bank on that as the only way they can get back into the title fight against the all-conquering T8 machine.

Prodrive so close yet…

Despite being bested by Triple Eight at QR, the signs were promising for Prodrive Racing Australia. Put it this way, the Ford team did better at T8’s test track than T8 did at their Winton home base earlier in the year.

Mark Winterbottom hung in there as a championship contender, Chaz Mostert had his best weekend of the year and Chris Pither had his best Supercars outing ever.

But there’s clearly a performance gap between the two crack squads that needs to be bridged if Frosty is going to have a real shot at retaining his title. He needs to be winning races, Mostert has to get in there at the top of the order taking chunks of points off the T8 cars, while Pither and rookie Cam Waters help out where they can.

So PRA’s forthcoming test day is crucial and hopefully it can deliver the sort of gains T8 clearly made from its last test before Darwin.

Speaking of Pither, it was fantastic he could deliver Super Black Racing’s first ARMOR ALL Pole Position, a top 10 finish and his most competitive outing as a Supercars driver for team owner Tony Lentino, who sadly passed away on Monday after a 15-month fight with cancer.

Pither’s season started in the horrors with two major crashes and then hit a high with a strong performance in Western Australia. But he then sank back into the midfield, leaving us to wonder if Barbagallo had been one of those performance aberrations we occasionally see from perennial backmarkers.

QR gives us more reason to believe that Pither has the ability to achieve success in this tough category.

Scott McLaughlin and Wilson Security GRM’s championship challenge is faltering. It’s always a bad sign when ‘the three enduros are worth 900 points and anything can happen’ line gets trotted out, which is what McLaughlin was doing after Ipswich.

In footy parlance that’s a bit like saying, ‘we’re three games out of the eight with four games to play so we’re still a mathematical chance of playing finals’.

Garry Rogers’ team faces a huge task to bridge the performance gap in qualifying and the races to its rivals, let alone giving McLaughlin a car in which he can consistently win races – which is what he needs to do from this point onwards.

The silver lining for the team at Queensland Raceway was the feisty performance of James Moffat in both races. While still clearly grappling with the S60, Moffat is getting closer to the pace.

Moffat was one of a number of drivers who showed good form across the QR weekend.

Others included Tim Slade, who rebounded from an unlucky run in Darwin to qualify and race in the top 10 while Todd Kelly’s ninth on Sunday was a strong drive for someone whose pace and prospects seem to be constantly under scrutiny.

But the bloke who deserves the most plaudits among the supporting cast was surely Michael Caruso, who has emerged as the leader among the four Nissan Altima drivers. His consistency is now a key, especially in qualifying, whereas his teammate cannot nail top 10 grid slots anywhere near as often.

On Saturday his race was cruelled by the incident with Fabian Coulthard and a dud pit stop, but on Sunday he briefly looked a shot at second and ended only just missing the podium in fourth.

Along with Caruso his engineer Steven Todkill deserves plenty of credit for the pace of the Nismo Nissan. Todkill was Caruso’s data engineer when he broke through for his first win way back in 2009 at Darwin when they were both at GRM. Todkill and Caruso are now the most enduring driver-engineer partnership in pitlane and enjoying a strong patch of form.