Shane van Gisbergen continued his rampant charge at Sandown, with the runaway championship leader clinching a fourth win in as many starts in 2021.

Van Gisbergen, who recorded a remarkable 17th-to-first victory on Saturday, went from pole to P1 in Race 4 at the Penrite Oil Sandown SuperSprint.

It marked van Gisbergen’s fifth straight win in the championship dating back to last October’s Bathurst 1000.

The Kiwi lost the lead to teammate Jamie Whincup in the run to Turn 1, with Whincup fortunate to escape without damage after straight-lining the sodden run-off at Turn 2.

The race began on a wet circuit following persistent morning rain, with Whincup caught out by the slippery conditions at Turn 2.

Chaz Mostert tried and failed to clear Whincup, and invited van Gisbergen into the battle.

Through the spray, Mostert clinched the lead, with van Gisbergen following him through.

After van Gisbergen had a look at Turn 9, Mostert held on, but only to the penultimate corner before skating through the grass.

Van Gisbergen pounced on the lap 9 restart, with Cameron Waters firing past Whincup into Turn 4.

Out high and dry, Whincup was passed by Andre Heimgartner and James Courtney, with the #88 Red Bull Ampol entry dropped to sixth.

Whincup worked his way back into fourth by Heimgartner at Turn 1 by lap 14, and set off after the leading trio. 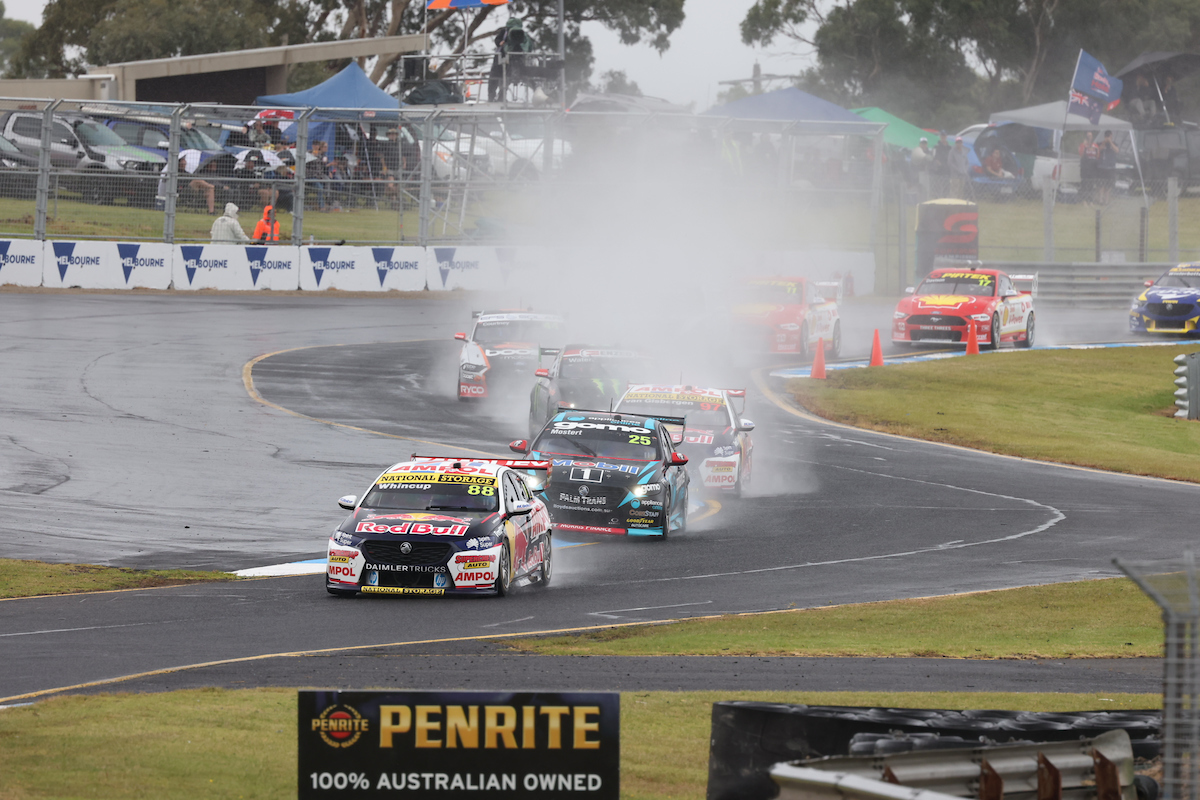 All the while, a dry line began to emerge, with Waters first to take on four click Soft Dunlop tyres at the end of lap 20.

Van Gisbergen and Mostert did the same on lap 21, with Waters hanging Mostert out wide at Turn 3 to regain second place.

Whincup was next to stop, but dropped behind Heimgartner on the run to Turn 1.

As the cycle cleansed, van Gisbergen held a 2.6s lead over Waters, who was rapidly falling into the clutches of Mostert.

By lap 31, the margin from first to second was nearly five seconds, with Waters defending from a rampaging Mostert.

The battle came to a head at Turn 1 with three laps remaining, with the barest of touches from Mostert turning the #6 Monster Energy Mustang into a spin.

Heimgartner pounced on the drama as Mostert attempted a redress, with the NED Whisky Mustang scything through into third.

The Kiwi bowled a wide at the same corner on the next lap to hand third to Whincup on a platter, with Waters somehow retaining second despite the pirouette. 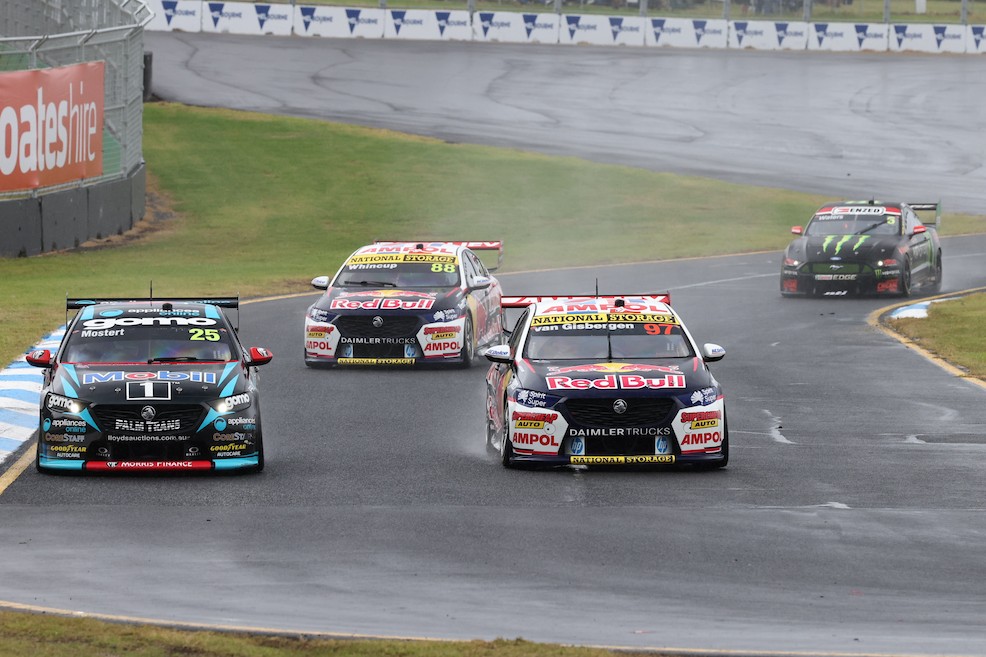 All the while, van Gisbergen ran his own race, and cruised to his 44th career victory by nearly 13 seconds.

With Mostert fourth, van Gisbergen extended his championship lead to 80 points, with Whincup and Waters jumping Mark Winterbottom, who battled to 11th.

Nick Percat impressed to sixth in his #8 R&J Batteries Commodore, with Courtney, Scott Pye, Tim Slade and Will Davison rounding out the top 10.