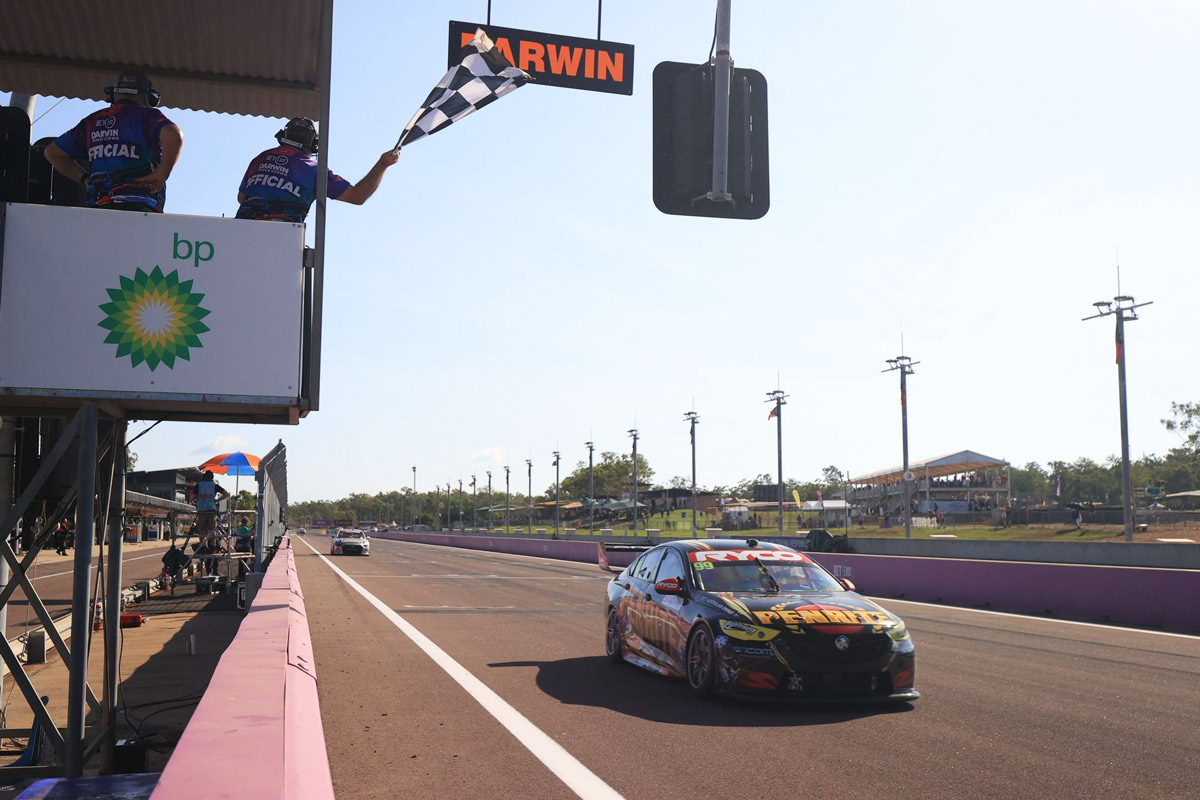 Jamie Whincup was third on the road but dropped to 17th thanks to a 15-second time penalty for an unsafe pit release, handing Scott Pye the final podium place.

Fellow heavyweights Scott McLaughlin and Shane van Gisbergen were 20th and 11th in the final result having also copped penalties during the race.

De Pasquale and Courtney are now on the back foot for Sunday’s two races, with each car having two sets of softs and three sets of hards to use for the weekend.

“Obviously we threw everything at it today, which means we’re going to have a struggle tomorrow but that’s OK when you can talk about a win. It paid off,” said De Pasquale.

“We had a really good car, our cars are always good around here so it is good to get a result. The team has been begging for [a win], so it’s awesome.”

Three of the top 10 qualifiers – Winterbottom from fourth, De Pasquale from sixth and Courtney from eighth – had started on the soft tyres.

Whincup won the start from pole man McLaughlin, before Winterbottom and De Pasquale moved to first and third during the early laps.

It was a disastrous opening lap for Brad Jones Racing, with Nick Percat and Todd Hazelwood taken out of contention in an incident between Turns 5 and 6.

Percat ran wide out of Turn 5 and was then hit by van Gisbergen, sending the R&J Batteries Commodore spinning into Hazelwood.

The damage put Percat out on the spot, while Hazelwood pitted for repairs and van Gisbergen was later dealt a drive-through penalty.

“That’s actually laughable,” said a bemused Percat after seeing a replay. “He’s just having a Shane day where he doesn’t bleed out of the throttle obviously.”

There was more carnage three laps later when Jack Le Brocq and Rick Kelly made side-to-side contact and both speared across the grass at Turn 8.

Kelly rejoined only to make further contact with Jake Kostecki, spinning the Matt Stone Racing Commodore into the tyre wall and bringing out the first Safety Car.

That triggered the entire field into pitlane, where Whincup was released into the path of De Pasquale, earning the Red Bull HRT driver a 15-second time penalty.

McLaughlin earned a 15-second penalty of his own by overtaking Courtney before the control line on a messy restart.

Both running a second set of softs, De Pasquale and Courtney then checked out over the hard-shod runners led by Whincup and Winterbottom, who moved off the softs in his stop.

De Pasquale had three seconds over Courtney and 13 over Whincup when a second Safety Car was called on lap 23 thanks to a crash for Macauley Jones at the exit of Turn 5.

After a lengthy yellow flag period, the Penrite Racing driver controlled the race over the remaining laps, his cause helped by the early finish.

Pye had been the big mover following a switch from hards to softs at his pitstop to charge into third ahead of teammate Winterbottom; the result marking Team 18’s maiden podium.

Team Sydney’s Chris Pither ran both stints on softs for fifth ahead of Fabian Coulthard and Chaz Mostert, who charged from 20th after a tailshaft failure in qualifying.

McLaughlin now leads Whincup by 101 points in the standings, with Mostert a further 57 points back in third.