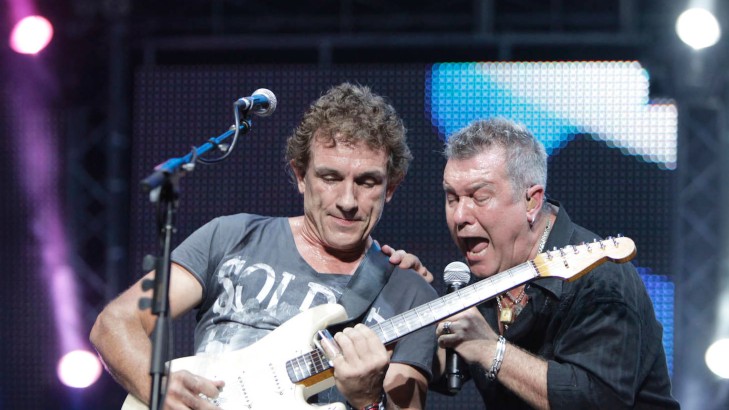 The concert will mark the band's 40th anniversary, and the first time they've performed together on stage in Adelaide since 2011.

Premier Jay Weatherill said Cold Chisel and the V8 Supercars will be a great mix.

"Cold Chisel is one of Australia's most revered rock bands, with a history spanning 40 years and a catalogue of songs and albums that, to this day, form the backbone of Australia's internationally-successful music industry," he said.

"The band's one-off concert at next year's Clipsal 500 Adelaide would be a chance for fans to celebrate the milestone and remember some of the great Chisel songs like Khe Sanh, Flame Trees, and Cheap Wine."

Jimmy said while the band gets plenty of offers to perform, the Clipsal 500 Adelaide was the reason for the band's homecoming.

"It was one those things where the event really suited the band and the timing was just right - a perfect storm," he said.

"The Clipsal 500 Adelaide is the biggest event on the V8 Supercars calendar, and the concerts are huge and notorious, so for us it was a great fit, a no-brainer."

In 1975 the band consolidated its definitive line-up and built its hard rock reputation at venues such as the Largs Pier Hotel.

"The Largs Pier days were really exciting for us because we really started to find our feet a bit and figured out how to write songs," said guitarist Ian Moss.

"We also learned how to deliver a show - a high energy rock and roll show that builds and finishes with a bang. We watched the crowds grow from week to week. They say the journey is better than the arrival, and that was true."

The band's reunion in 2009 for a one-off performance at Sydney's Olympic Stadium attracted 50,000 fans, with that concert sparking a renewed enthusiasm for working together again - on stage and in the studio - culminating in the Light The Nitro tour in late 2011, the biggest tour ever by an Australian band, and the critically-acclaimed No Plans album in 2012.

Tourism Minister Leon Bignell said the band's show on the Sunday night of next year's Clipsal 500 Adelaide would be the most anticipated rock concert of 2015.

"Adelaide's Clipsal 500 festival has built a national reputation for showcasing the best international and locals acts, and delivering some unforgettable concerts," he said.

Minister Bignell said this year's Clipsal 500 Adelaide generated $59 million for the South Australian economy, and there's no reason to believe that figure won't increase again during the 2015 event.

"Since the first V8 Supercar race in Adelaide in 1999, the event has delivered an economic benefit to the State of more than $425 million, and had attracted 3.7 million racegoers," he said.

"The Clipsal 500 Adelaide continues to be a huge success because it always looks to be innovative. It's refreshed and improved every year, and Cold Chisel's presence in 2015 is sure to take the event to a new level."

Tickets for the Cold Chisel 40th Anniversary Concert at the Clipsal 500 Adelaide on Sunday March 1, 2015, will be on sale from Friday August 8 through Ticketek.com.au.