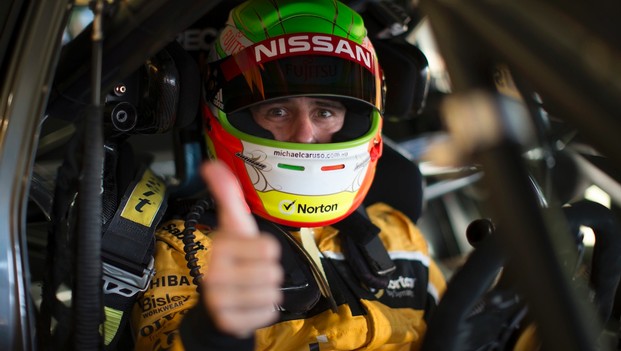 Being involved in a V8 Supercars team isn’t allabout racing cars, as Michael Caruso will find out later this week.

Ahead of next weekend’s SKYCITY Triple Crown,the former Hidden Valley event winner will put his Italian sporting heritage togood use when he captains the ‘Nismo Ninjas’ in the inaugural ‘Nissan ChampionsCup’ in Melbourne this Friday evening.

The Nismo Ninjas, made up of players from theNissan Motorsport’s V8 Supercars team, will play against the ‘Nissan GT-Rs’(Nissan Australia) and the ‘Nissan Finance Fives ‘ (Nissan Finance) in around-robin indoor futsal tournament.

While the three-team competition is likely tobe hotly contested, it has been implemented to create closer ties between theNissan head office in Dandenong and its factory race team, based down the roadin Braeside.

The Nissan Champions Cup is the brainchild ofCaruso and Nissan Motorsport manager Jeff Fisher – both of whom share a lovefor ‘the world game’.

Fisher, in fact, will be the referee of thetournament, but Caruso expects no favours from his boss on the pitch.

“I think it will be a very tough, but enjoyabletournament,” Caruso told v8superars.com.au.

“It’s great to do little things like thisoutside of racing. The racing season can get very busy during the year and it’shard to squeeze in some fun and games. I’m only new to the team this year, sois a great chance to work closer with some of the guys on the floor, and get toknow a few of the people at Nissan Australia.

“Of course, we’re going to try and win, andI’ve spoken to Jeffery about some lenient umpiring, and while he seems open tobribes, he is asking for more than he pays me!”

But can the Ninjas defeat the GT-Rs and theFinance Fives? Caruso says that his team is in safe hands.

“If we want to win, the Ninjas will just haveto pass it to me!” he jokes.

“I’ll be the playmaker, the quarterback, theIron Chef and the CEO. I have the pressure of being ‘El Captain’ but it’s aresponsibility I’m not taking lightly.”

The inaugural Nissan Champions Cup will beplayed this Friday afternoon at Springers Leisure Centre in Keysborough,Victoria.

Michael Caruso  ›
15' Nissan Motorsport ›
15' Jack Daniel's Racing ›
Stay In The Know
Sign up to the Virgin Australia Supercars Championship Newsletter
This website uses cookies to improve your user experience. By continuing, you will be providing your consent to our use of cookies.Ok