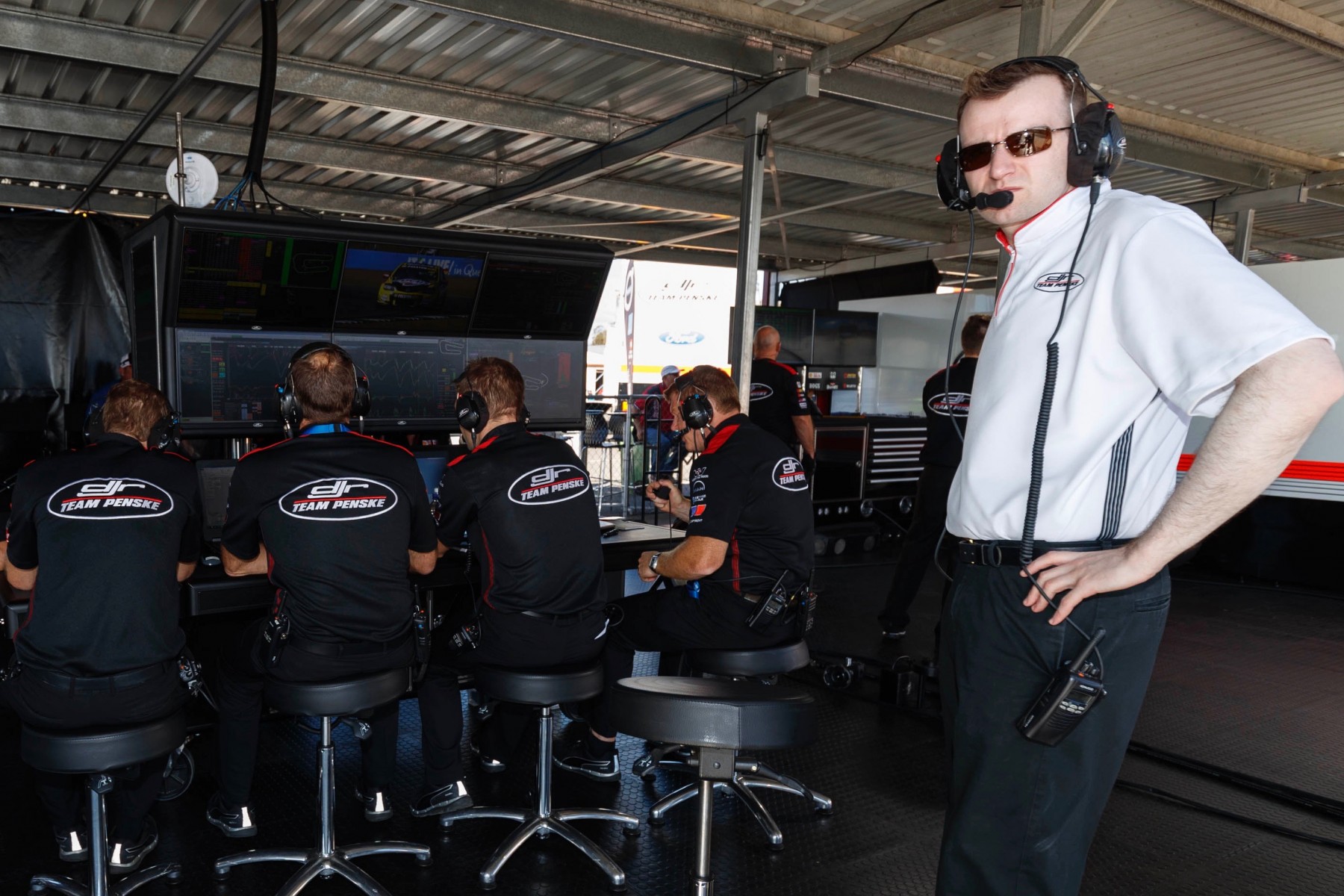 Expanding to two cars and welcoming Fabian Coulthard, DJR Team Penske came out the box firing, scoring two of the three ARMOR ALL Pole Positions at the season opening Clipsal 500.

Both Coulthard and teammate Scott Pye have found themselves on the podium this year, though racing at the front has proven more difficult as the season has stretched on.

Coulthard’s engineer from Brad Jones Racing Phil Keed came with him to the team, while Adam De Borre has joined from Prodrive and works remotely, engineering Pye this year in a new combination.

While the team has netted an experienced crew, the group is not experienced at working together, so there have been challenges behind the scenes.

Add to that the tough news Pye would be out of a seat next year, with DJRTP boss Tim Cindric confirming the team had its eyes on Scott McLaughlin since joining the category.

In the wake of a particularly hard round at Queensland Raceway, managing director Ryan Story spoke to supercars.com about the year so far.

RS: I think there have been some encouraging signs. We’ve managed to get a couple of podiums and to start off with a couple of poles in Adelaide was something unexpected. But across the board, we’ve had some inconsistencies and I think there have been some tracks that have suited us and some that haven’t. And really, while we were supposed to get our house in order we hadn’t delivered some of the results we would like to have seen. So I think on balance, there have been some encouraging signs, but there’s a lot more we need to do before we see the results we think are commensurate with where we actually are.

At Winton, Fabian said he thought the team was ahead of schedule in terms of performance. Do you feel like you’re there now?

I think if you take the most recent event at Queensland Raceway we should’ve done better. The car speed was there certainly, but it didn’t come together. We had the failure with Scott’s car, which was quite a dramatic accident – and you can’t have these setbacks and give yourself any degree of a fair assessment.

At Winton we were satisfied we came away with a podium, but we’re not really going to be ahead of where we are until we’re getting those consistently.

You guys are doing a lot more in-house development this season from what I understand. How has that workload been and what is being worked on behind the scenes?

I think it is safe to say we are doing more in-house development than what we have at any point since 2010. And it’s a large focus of our back of house operations at the moment. I think some of the fruits of those labours will not be worked out until later this year and possibly into next year. A lot of these things have long gestations and the reality is, we’ve got some planning there that has been in place for some time and we’re proceeding and pursuing that with some degree of vigour.

Do you have any test days on the horizon?

Certainly we’ll be out at QR again pre-enduros and we’re looking forward to that, getting more miles for Luke [Youlden] and Tony [D’Alberto]. They’ve done a great job for us when they’ve been in the car for selected practice sessions for some of the dedicated co-driver sessions and they’re gelling with the team very well, and we’ll certainly be taking the opportunity to go testing again later this year to thoroughly prepare for those longer races.

In terms of 2017, how has the announcement of drivers for next year affected Scott Pye?

I think there’s some clarity there in the situation, but it’s a very difficult position for him. Our focus between now and the end of the year is giving him the best car we can give him, and every opportunity to get results. I think it’s not a question of if, but when we hear something about what his future is. And I think he’ll go on to bigger and better things. But we’d love nothing more than to see him win a race or two with us – towards the end of the season he certainly has very strong results [traditionally] to finish up his time with us with.

Have you thought the announcement has affected Fabian at all, given Tim Cindric was quite vocal about how much they wanted Scott and kept an eye on him?

Fabian’s his own man – I think he’s just focussed on what he’s doing, so I don’t think it’s had an impact on him at all.

How do you feel Fabian and Phil are going with the car? They’re an interesting combination because they have experience working with each other, but neither have worked on the car before. Whereas in comparison, Scott had last year in the car and Adam has experience with the FG X, even though I understand what you guys are doing is a bit different to what they’re doing at Prodrive.

Well at the moment the platform is very similar still. But interestingly, that continuity between the relationship of Phil and Fabian has certainly been a strength, because one understands the other quite well and it takes a little bit of that pressure off.

I think the reality, when you look at where we are, there’s effectively three pieces of the pie.

You’ve got the car, the team, and the drivers – I don’t think we’ve had one weekend where all the pieces have been in complete alignment. So we need to keep working on that, we need to be consistent, we need to know what we’ve got underneath us. Until such time we do that, the results are going to be what you’re seeing now.

We’ve got a lot of work to do in that regard.

Phil and Adam are doing a great job getting to grips with the package and as you say, in the case of Fabian and Phil together, they’re in something completely different to what they’ve been in in the past. Again the continuity of that relationship is a strength.

Looking forward, Tim confirmed DJR Team Penske will run the Falcons next year, but have you guys made any progress with manufacturers beyond ‘17?

We’re taking it as it comes at the moment. We’re comfortable with the platform we have but what happens in the future remains to be seen.

Are you finding it’s becoming easier to manage the Australia-US divide as time goes on?

I think it presents its own challenges, but the reality is … communication is a strength of our group and has been from day one. We coordinate and communication quite regularly on all matters. I think that’s something that is always going to present its challenges when there’s 15,000km of distance between us, but it’s only ever going to get better as we proceed on.

I know you’ve said there’s plenty of work to do and plenty going on behind the scenes, but what is the key next step you need to take to feel like you’re moving forward?

I think it’s consistency. There are tracks we’re quite strong at, and those are the faster tracks – you can see from where we’ve had some podium success. Obviously we got it right at Winton as well in the end and there were some encouraging signs at Queensland Raceway as well, but we have to have consistency wherever we go. We have to basically wheel our cars out of the truck and know what the car needs.

We need to get a bit better on the soft tyre as well. So there’s a lot of work we need to do and I think the key word really is consistency. We can see the light at the end of the tunnel and we have weekends where we have, as I mentioned, where either the team, driver or car elements are in alignment but not necessarily at the same time. And as long as we do that, we’re not going to satisfied with where we are and we’re not going to get the results we believe we’re capable of.