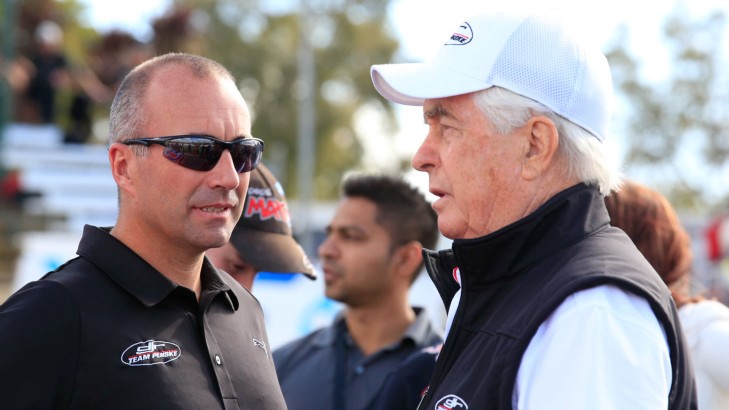 Roger Penske wasn't surprised by Marcos Ambrose's decision to step down after just two events of his celebrated comeback to V8 Supercars.

During his flying visit to the UBET Perth SuperSprint, Penske revealed that Ambrose expressed concerns about his struggle to find speed during the season-opening Clipsal 500 Adelaide.

Ambrose made up his mind to temporarily relinquish his drive at DJR Team Penske following further lack of progress in the non-championship races at the F1 Australian Grand Prix.

According to Penske, the returned former V8 Supercars champion's drastic solution didn't come as a shock.

"No, because I had been with him and talked with him (in Adelaide), so I knew that he had some concerns on just exactly where we (DJRTP) were," he said. "I wasn't surprised, no."

Penske was adamant that when Ambrose called to discuss his decision, their conversation wasn't difficult or strained.

"It was 'What do you think's the best thing to do?'" he said. "We talked about it and we moved on. It was five minutes.

"He probably thought about it for more than five minutes, but the ultimate discussion was not very long. I think it was the right thing because it's given us some validation on certain parts of the car, which now we have really good input on (from stand-in Scott Pye)."

During his visit to the Clipsal 500, Penske confirmed publicly that Ambrose had signed for two years with DJR Team Penske.
Asked at Barbagallo Raceway if the changed circumstances had altered the deal, the American tycoon responded with an unequivocal "No".

Penske supported and praised Ambrose's willingness to step aside to remove himself as a variable in DJR Team Penske's efforts to get to the bottom of its Falcon FG X's lack of competitive pace.

"I think his decision was one that we made together," he said. "I didn't say, you know, you should get in or get out, and he really said 'Listen, what's the right best thing for the team?' So I'm not in any way, shape or form unhappy with him.

"He's done a great job. He's supporting us, he's supporting Scott, and I think Scott's learning some from us. Look, we got two good guys. Now, what we have to do is get them a better horse."

Penske added: "He had high expectations, as we both did, but quite honestly, you'd have to say we're both rookies. The cars have changed (since Ambrose's final V8 Supercars season in 2005 before he switched to NASCAR), so there's a little bit different environment to what he had before and I think what he felt was 'I don't want to hold the team back'."

Ambrose will again sit out the Winton SuperSprint at the end of next week before DJR Team Penske takes stock during the longer break to the SKYCITY Triple Crown Darwin on June 19-21.

When - or if - he will reclaim his seat before the endurance races is still undecided and Penske was guarded about when Ambrose might return to racing with the team beyond confirming that he would be back.

"Yes, that's the plan at the right time," he said. "Regularly or not, we haven't decided. But Marcos will be back in the car at some point.

"We haven't made any decision when he's going to get in or not. I mean, I just say we'd like to get him back in the car at some point. Jumping back and forth with drivers right now, that's not productive."

03/05/2015
Related Content
Marcos Ambrose  ›
15' DJR Team Penske ›
Stay In The Know
Sign up to the Repco Supercars Championship Newsletter
We use cookies to ensure that we give you the best experience on our website. If you continue to use this site we will assume that you are happy with it.Ok