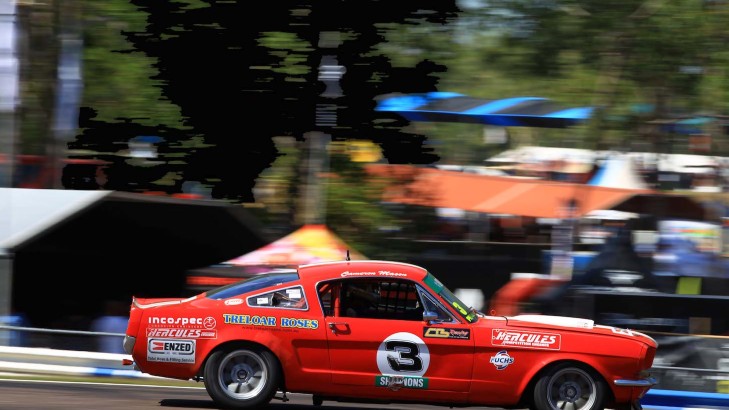 Local drivers have targeted a big weekend ahead of the ENZED Touring Car Masters' only visit to Sydney this season.

The ENZED Muscle Car Classic will be a feature at the Sydney Motorsport Park 400 V8 Supercars event this weekend and nine drivers who call Australia's largest city - and its surrounding regions - home are keen to capitalise on rare home-turf advantage.

Five-litre Shelby Mustang driver Cameron Mason is one such example and is also one of the form drivers in the series heading into the second half of the season.

Having recently celebrated his 28th birthday, Mason is one of the young stars of the TCM series and took over the Mustang originally driven by his father, 2007 TCM champ Steve Mason, at the Darwin round of the championship in June.

There, he not only won the ProSports class but mixed it up with the likes of Jim Richards and John Bowe in a stunning performance at the pointy end of a very competitive field.

After qualifying seventh, Mason charged to fifth in race one and had climbed as high as third outright in the second race before running off the road at turn one when attempting to pass for second - ultimately recovering to eighth.

The storming drive attracted plenty of attention from within the TCM paddock and the second-generation racer says he is keen to take advantage of local knowledge to do more of the same this weekend.

"I grew up around Oran Park and Eastern Creek (Sydney Motorsport Park) and did most of my early racing there, so I've got a good idea of what it's about," Mason said.

"It's exciting to have a home round and hopefully we can perform well and have a good weekend. I'm excited about it."

Mason's Darwin performance opened plenty of eyes - but none more so than the man himself.

"Racing at the front with guys like John Bowe and Jim Richards is a great experience," he explained.

"It's really a dream come true and a once in a lifetime kind of thing - though I certainly want to do it again! To even be close to them, let alone mixing it up with them, is great.

"The car has always gone well at Darwin - Dad went well there last year when he was driving - but we have been making gains every time we go out. Certainly we have no power complaints from our Hercules engine and we've improved power-down, too."

Mason currently sits third in the TCM ProSports standings, 82 points from the lead and just 24 from nearest rival, Porsche ace Greg Keene. He has a class championship in his sights this season ahead of a potential move up the ranks next year.

"The target definitely is on bringing home the championship and have a crack at winning the ProSports title this year," he said.

"It's very competitive and there are some great competitors in the class but that's the goal. After that, and its sponsor dependent of course, but we would like to look at stepping up into ProAm next year.

"It's an exciting time for me and I'm looking forward to this weekend."

Mason isn't the only local driver looking for a big result at Sydney Motorsport Park, a host of key contenders hail from New South Wales and are keen to impress in front of their local fans.

The ever-popular Tilley family will be well represented thanks to Cameron Tilley and his '69 Valliant Pacer while two key TCM contenders expected to battle for outright wins also call New South Wales home.

ProAm class contender Tony Karanfilovski has been a star of the 2014 season, notching up two outright race wins in his '69 TransAm Mustang. He currently sits second in the ProAm class, behind leader Mark King.

A 26-car round will include the return of Tasmanian racing hero Greg Crick and his MOPAR Chrysler Charger following an extended layoff due to illness.

The ENZED Muscle Car Classic will be made up of three races across the Sydney Motorsport Park 400 V8 Supercars weekend, two of them to be broadcast live on the Seven network around Australia.

Race one will be broadcast on Seven and 7mate, while Sunday's finale' will be shown on 7mate nationally prior to the final
V8 Supercars race prior to the season of endurance. Click here for details on the TV schedule across the V8 Supercars weekend.