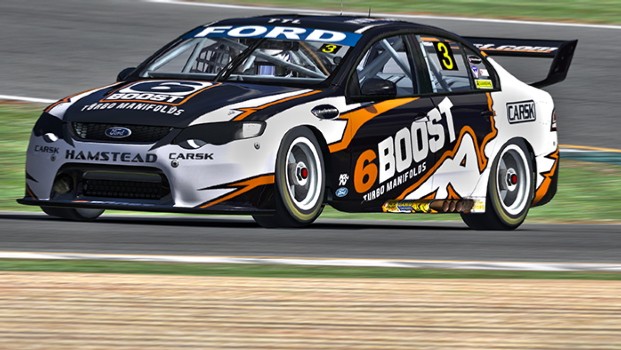 Round Two of the iRacing.com V8 Supercar Series stayed in the States and the drivers and teams took to Road Atlanta. After the recordbreaking amount of 135 drivers the week prior, it was backed up withanother 128 for week two.

Qualifying was led by Richard Hamstead with a 1min21.044 with Madison Down insecond just .029sec behind. Justin Ruggier and Adrian Stratford would qualify onthe second row with Mitchell McLeod and Josh Muggleton from the third row. JohnEmerson and Shaun Kelly would start from the fourth row with Brad Ryan and MatthewHill rounding out the top 10 qualifiers.

When the lights went green it was Hamstead leading the fieldinto turn one for the first time, with Down hung out on the outside. Ruggier wasable to sneak by and move up into second place. Stratford's race would turn badwhen over driving turn one and going off the road – losing nine positions in theprocess – and now sitting outside the top 12.

Hamstead would lead the first lap of the race and as Ruggiergot a super run out of the last corner took full advantage with a move underbrakes into turn one to take the lead and Down would capitalise as well, withHamstead stuck out wide Down would follow Ruggier through to get back intosecond place. Going down the back straight, Hamstead would get a massive slipstream and re-gain his second position in the race behind Ruggier.

On lap three, Muggleton would go to make a move down the insideof McLeod into the final chicane, but on exit a little bit of net code putMuggleton into a half spin which allowed Emerson to have a look down the inside. But he had to use too much kerb, which then gave Scott McLaughlin achance. He tried the criss-cross on Emerson and they both went side by sideinto turn two and door to door contact was made on the exit with Emersonholding the position over McLaughlin.

Into turn six on lap five, Hamstead would put his left rear wheelonto the grass under brakes and went straight off the road, losing about three positions. At the end of lap five the pit stop window had opened up with MarlonMcMullen and Robert Hartley both taking the opportunity to get out into freshair and clear track. On the following lap Brad Ryan would also come into pitlane.

Hamstead would be the first of the front runners to comeinto the lane at the end of lap nine, and back up front into turn one on lap 10Down got a good run and tried to make the most of it going down the inside ofRuggier. But Ruggier tried to hold onto the outside through one and got loosecoming up the hill into turn two. He ultimately lost control, sending the vehicle straight into theside of Down's car, putting them both in the wall and out ofthe race with blown engines.

With Down and Ruggier out of the race it gave McLeod andMuggleton a massive opportunity but for Muggleton it would come unstuck – when enteringpit lane on lap 13, he put it into the wall and bent the rear of thecar, forcing Muggleton into retirement, the third to retire from the race.

Just as the fields pit window was coming to an end, Ellis wasone of the final drivers to pit. When he exited pit lane he was side byside with Ryan and coming through turn two Ryan was almost clear. But on coldtyres Ellis slid and unfortunately contact was made, which sent them botharound.

At the end of lap 23 it was time for race leader McLeod toenter pit lane – and with Hamstead around 30 seconds behind it was going to makefor an interesting pit exit. Hamstead would get the lead by just over a secondwith McLeod now back in second place and John Emerson managing to avoid all thecarnage and move up into the top three, with McLaughlin now in fourth after the pitcycle finished.

Up front it wasRichard Hamstead's day, taking victory over Mitchell McLeod with John Emersonrounding out the podium.

From there it was Shaun Kelly, Matthew Hill, Tobias Czerny, Adrian Stratford after a fightback in ninth, and Marlon McMullen who, after getting spun late in the race, still managed to bring home a good result.

Broadcast done by the crew at www.v8sonline.com.au

03/05/2013
Stay In The Know
Sign up to the Virgin Australia Supercars Championship Newsletter
This website uses cookies to improve your user experience. By continuing, you will be providing your consent to our use of cookies.Ok