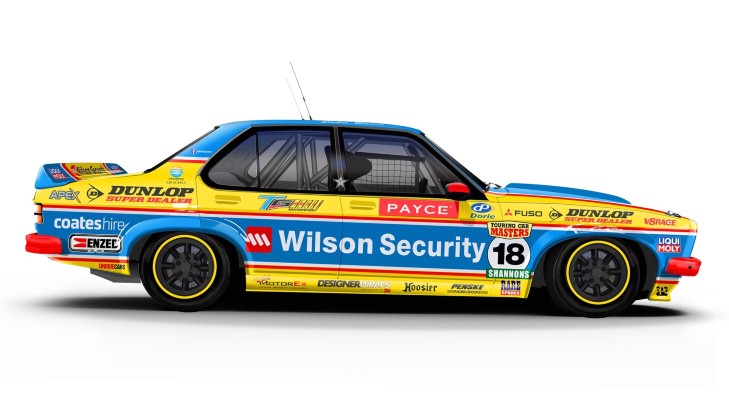 John Bowe will race a Torana in the third round of the ENZED Touring Car Masters series this weekend at Winton Motor Raceway in Victoria.

The three-time TCM champion will trade his famous 'Mustang Sally' in for the weekend to instead drive a brand-new Holden Torana SL/R 5000 recently completed by the Bendigo Retro Muscle Cars team, headed up by long-time TCM competitor Gary O'Brien.

And though he raced Volvos and Nissans in the Australian Touring Car Championship/Bathurst 1000 before linking with Dick Johnson's iconic Ford team in 1988, and made his TCM debut in a Chevrolet Camaro twenty years later - this weekend will be the first time that Bowe willhave driven a Holden in competitive anger during his career.

"Forget the brand on the front. It's a new car and always been a bit of a fan of learning cars," he said.

"When Garry Cooper put me in the Elfin I learned a lot. Then working with the likes of John Sheppard, Neal Lowe at DJR and then of course the Stone Brothers - I've always loved learning that part of it and understanding how things work in the cars.

"I'm not expecting any miracles, but I like the car. I've already had a little drive and changed a few things, but I wouldn't say we've refined it but we will. It takes a fair bit of driving for to make it feel like your own pair of shoes!"

Given his position in the TCM Championship, Bowe believes he has nothing to lose as he takes on the contest in the new car - and wasn't fussed about jumping to the opposite side of the famous Aussie brand battle.

"I had opportunities (to drive a Holden) during my V8 career but didn't, more out of loyalty to Dick (Johnson) than anything else.

"Ford fans are very loyal, but I think the Muscle Car era is for car lovers rather than about fierce brand loyalty. People just love seeing the old cars out their being driven like they should and I love doing it.

"This is all a bit of an adventure and I'm actually quite excited about it!"

Bowe will tackle three races in the Torana at Winton this weekend with the tight confines of the 3km circuit two hours north of Melbourne expected to suit the lighter, more nimble Holdens.

The 1995 ATCC champion and double Bathurst 1000 winner said he'd always been keen to get behind the wheel of Holden's iconic Torana muscle car since first watching it race in the mid-1970s.

"I was a big fan of the Torana when I was a young bloke," Bowe admitted.

"I thought it was a horn little Muscle Car so I've always wanted to have a go in one.

"Gary and his team have done an amazing job building the car - they've even gone to the lengths of getting the original 'hounds tooth' trim into the inserts of the race seats.

"It's got all the original glass, proper wind up windows and RARE Spares have been pretty involved in getting bits and pieces for it.

"Gary, Travis Langham who built it and Lyndon Little who did all the engineering and the engine are all Holden tragics - which is pretty funny for me coming from so long in the Ford world!

"The biggest challenge has probably been getting all of my loyal sponsors onto the car - Scott Yorston from SS Media has done a super job making the Mustang livery work on a smaller car."

Bowe says he is looking forward to the chance to the opportunity to help develop a new car - and something different from his usual ride.

"The Torana is very, very different. I've driven a lot of TCM cars and a lot of them have similar characteristics. The Torana feels quite different, quite small and has different traits, which I haven't fully understood yet.

"I'm quite happy with the speed and very happy with the Holden engine. The other Torana's have Chevy's, which is down to parts availability, but Gary has run HQs with Holden 308s for years and still has lots of good stuff left over. It's very good."

The third round of the 2015 ENZED Touring Car Masters Series - The Rare Spares Rose City Trophy - will be held alongside this weekend's fourth event of the 2015 V8 Supercars Championship season, at the Winton SuperSprint beginning on Friday.