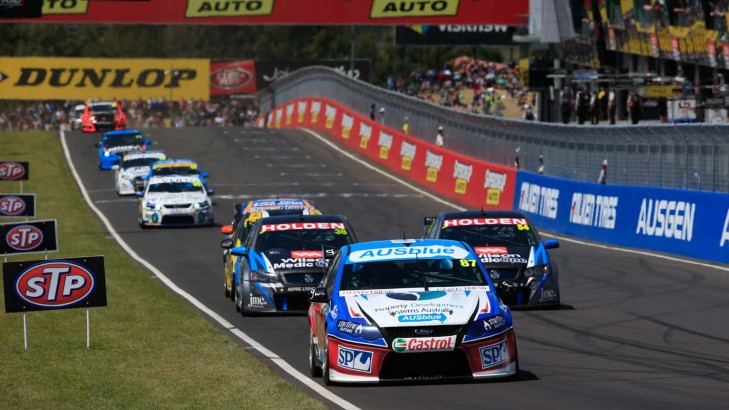 A small error in last weekend's Wilson MedicOne Enduro at Mount Panorama proved costly for Ash Walsh, taking him out of the race and out of contention for the 2014 Dunlop Series title.

The 26-year-old lined his Matt Stone Racing-prepared Falcon in fifth position on the grid for the first ever 250km run at the Supercheap Auto Bathurst 1000.

Charging through the field to catcgh the front-runners, it was shock when theInfants Friend entry was sent into the concrete wall at Reid Park on lap nine - and ultimately out of the running for 300 points.

"I was just settling into the race and made up a couple of positions there at the start and was chasing Cam Waters," he toldv8supercars.com.au.

"I went into Reid Park and just as the car came over the crest and landed, it landed a little funny and snapped oversteer.

"Once I realised I was in trouble, I was trying to save it but got onto the dirty stuff and then you're just a passenger. It's just another mistake where you're slightly doing the wrong thing, but it just bites you so hard."

With only a four point difference to series leader Paul Dumbrell - who eventually won the 250km race - a strong result at Bathurst was necessary for Walsh to remain in contention for the 2014 title come the final around at the Sydney NRMA 500 in December.

The DNF extended Dumbrell's lead to 304 points - forcing Walsh to surrender the title fight and giving up any titlehopes for another year.

"Championship, out of the question," he said.

"Bathurst was the race where I couldn't afford to do it and I feel sorry for the team - it's obviously put a stunt on such a successful year that we had, so it's disappointing to end that way," he said.

Walsh - who joins Dick Johnson Racing's Scott Pye for this year's Pirtek Enduro Cup - finished last year's series as runner-up to 2013 Champion Dale Wood. The pair had a tough run in the 1000 as well, with Pye fighting back after damage at the notorious turn two, just ot suffer a tyre delamination and big hit later in the race at Conrod Straight.

Despite the titleslipping through his fingers for another year, Walsh said he will head to Olympic Park still hungry for the round win.

"It doesn't change my approach to Sydney at all really," he said.

"I've just got to go to Sydney and have a good round there - the car's strong at street circuits.

"I want to go out there and try and win and make up for the silly error I made this weekend."

While the title is out of reach, Walsh will be gunning for race wins at theDunlop Series' final round at the Sydney NRMA 500.

Waters on top ahead of Enduro

Dumbrell to start from P1