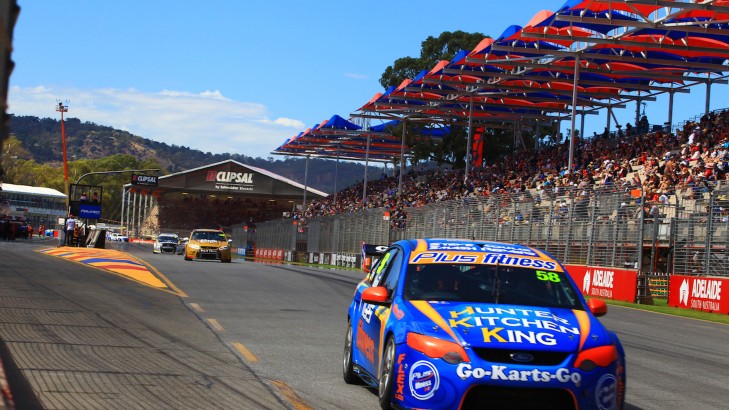 Having taken the Plus Fitness Falcon to sixth in Race 1 and third in Race 2, third for the weekend makes it back-to-back podiums for Russell, including the 2014 season finale.

A clutch failure limited the 23-year-old to 10th in qualifying, but Russell fought back strongly during the two races.

"After qualifying we knew we had a lot of work to do," Russell said.

"The clutch exploding didn't help things, but we were still behind the eight-ball with set-up. We chipped away at the car and made a huge step in both races. By the end of the weekend it was a different animal compared to qualifying."

The Novocastrian Motorsport driver moved up to eighth early in Friday's opening race, and kept it clean to eventually finish sixth and equal his best race result in Adelaide.

Things got even better on Saturday, with Russell vaulting to fourth at the start and making a decisive move into third place halfway through the 18-lap race. The finish secured third for the weekend.

"The car doesn't have a single mark on it; in each race we were able to keep out of trouble, pick up some places and grab another podium finish, which is fantastic," Russell continued.

After a troubled start to 2014, getting good points on the board early was Russell's top priority after leaving the season opener third in the standings.

"It's a sensational way to start the year," he said.

"I'm so proud of our team and happy to repay Plus Fitness for supporting us. Once again we have shown that we deserve to be up at the front and can beat teams with bigger budgets.

"I couldn't be happier and it gives us a great platform for the rest of the season."

The 2015 Dunlop Series continues at Barbagallo Raceway, Western Australia, on 1-3 May.