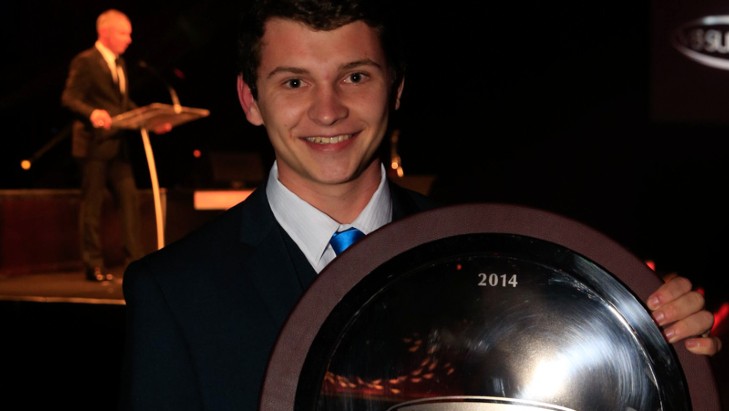 The award recognises the best performance by a full-time driver in their first year, spanning both categories and previously won by names including Marcos Ambrose, Mark Winterbottom, James Courtney and this year's Barry Sheene Medal winner Scott McLaughlin.

The 19-year old was humbled by the recognition.

"It was an absolute honour to win the Mike Kable Young Gun Award, all of the previous winners have gone on to have very successful careers in motorsport - it is a great reward for what has been an incredible journey throughout 2014," Hazelwood said.

The rookie believes that 2014 was the perfect way to start his debut V8 Supercar campaign.

The Tecalemit Australia driver managed to finish seventh for the round at the final event, the Sydney NRMA 500, after an altercation in Race 1 finishing 20th, and also walked away being the highest placed rookie in eighth place on 1131 points.

After a long night's work for the team, Hazelwood recorded his personal best finish on Sunday, coming home in fourth position.

"Sydney was a great success for the team at Tecalemit Racing, Saturday was good in a lot of ways even though our result was disappointing - we showed great race speed and ability to race through the field at a clean rapid rate," Hazelwood said.

"Sunday was a much better day for the team, it was a long night Saturday getting the car prepared for the early morning qualifying so it was great to reward the team with ninth in the session.

"Race 2 was close and tough the whole way, and I was fortunate enough to avoid serious damage on a number of occasions during the opening laps of the race."

Hazelwood thanked his team, sponsors and family for their support during the 2014 season.

"The team at Matt Stone Racing have done an incredible job all year, they have helped me get up-to-speed at a rapid rate," Hazelwood continued.

"A big thank you must go out to my Mum, Dad and Sister for their dedication and work this year, without the help from my family I would not be racing.

"My sponsors throughout 2014 have been amazing and I can't thank each and every one of them enough for all their support."

Hazelwood is now focused on the off-season and cannot wait to hit his home streets of Adelaide for the first round of the 2015 Dunlop Series racing with Matt Stone Racing and compete under the Tecalemit Australia banner.

Click here for the full list of award winners from the V8 Supercars Gala Awards on Monday.