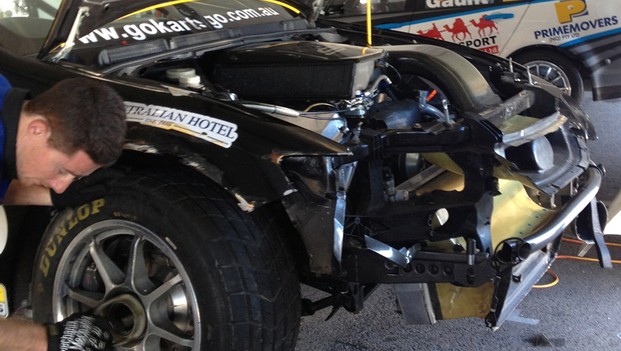 There was doubt as to whether the #58 Ford Falcon of Drew Russell would be repaired in time for the Coates Hire Ipswich 360 this weekend – the fourth round of the Dunlop Series V8 Supercars.

But with all hands on deck – including drivers stepping in as mechanics to help complete the work – the Go Karts Go Falcon will be on the grid.

At the Sucrogen Townsville 400 – the last Dunlop Series event – the weekend begun with the strongest performances to date by Novocastrian Motorsport’s Russell brothers. However, while younger brother Aaren took his best ever V8 Supercar race and round finishes, for the older of the Newcastle duo, it was a story of heartbreak as Drew’s Falcon was loaded in pieces for the journey home.

What had seemed like an impossible project, to have the heavily damaged #58 repaired and ready in less than two weeks, has now become nothing less than an ultimately impressive effort as the young drivers became their own mechanics and panel beaters to have both cars heading into the final stages of preparation this morning

No one could be happier than Drew, who described returning home with the damage as “stressful, to say the least”.

“Knowing how much work, and how many dollars were needed to get the car ready in time, we were quietly confident our crew would keep with our tradition of never giving in and never giving up,” he said.

“We’ve worked crazy hours to source parts, fix panels and put the whole puzzle back together so that I can go racing again.

“There is no way to thank our crew, our suppliers, our Go Karts Go staff, sponsors and all of the supporters who quite literally put their money where their mouths are, so it will mean that I’ll be on the grid with Aaren this weekend. What an effort! I’m still pinching myself that the Falcon is actually ready!”

After the high speed hit into the wall during the final race at Townsville, the list of what didn’t need fixing was shorter of the list that did.

While the three Hunter Valley Go Karts Go centres continued to operate under the watchful eyes of the Russell family, both Drew and Aaren spent in excess of 180 hours, across every available moment, in the garage, completing the demanding job at hand to repair and replace the front, right front corner, complete drivers’ side, sill, rear end watts linkage, rear boot and bumper.

Now just hours out from the departure of the team transporter, the #58 Go Karts Go Falcon is impressively back in one piece. With all hands on deck for the finishing touches on Drew’s #58, Aaren’s #59 CEG Rentals Falcon sits on the setup patch awaiting its final once over.

“Wow, what a couple of weeks we've had,” Aaren said. “Coming off my best career result and then pushing Drew’s bent car into the truck was definitely the highs and lows of motor sport.

“We knew it was going to be a tough task, but to the true Novocastrian spirit, we never give up, we never say no, and we do whatever it takes to get both of our cars on the grid!”

Tickets are still available for the Coates Hire Ipswich 360.

Plenty of Pace, but no Luck for Douglas