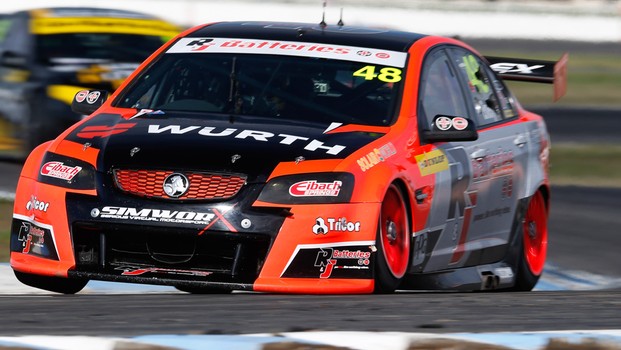 Geoff Emery has won the second race of the Winton round of the Dunlop Series, ahead of Drew Russell and Luke Youlden.

The race was a reverse top 10, meaning Youlden started on ARMOR ALL Pole Position, but a poor start saw him lose several positions off the starting line.

It was ultimately a clean run for the series, all 12 laps of the race running without Safety Car intervention, though Paul Morris flexed his muscles to edge past Nick McBride early on.

Casey Stoner started on the last row of the 34 car grid after more hard luck yesterday, but managed a good run to eventually finish 22nd.

Championship leader Dale Wood started 10th and edged his way through the top of the field to finish fifth, giving him pole for this afternoon’s final Dunlop Series race. Jack Perkins – who scored pole for yesterday’s race and will pair up with Fujitsu Racing GRM’s Scott McLaughlin for the PIRTEK Enduro Cup – starts alongside Wood on the front row.

A third race follows this afternoon, the grid determined by combined points from the first two races.

Wood Drives Away From Chaos

Perkins Backs up Win With Pole

22/08/2013
Related Content
Geoff Emery  ›
Stay In The Know
Sign up to the Virgin Australia Supercars Championship Newsletter
We use cookies to ensure that we give you the best experience on our website. If you continue to use this site we will assume that you are happy with it.Ok