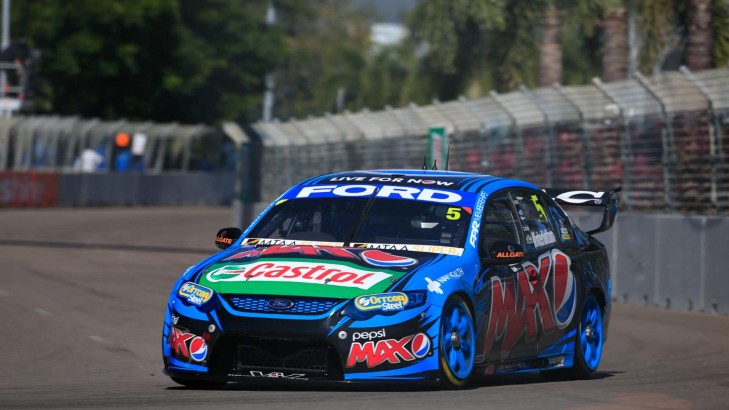 Ford Performance Racing is on a salvage mission after points leader Mark Winterbottom qualified only 17th and 19th for Races 20 and 21 of the V8 Supercars Championship at the Castrol 500 Townsville - Driven by TAFE Queensland.

Team principal Tim Edwards said all thoughts of the Pepsi Max Ford Falcon FG II driver vying for victory in either of the 125km races had been dismissed.

"It's a terrible situation," he said.

"The best case scenario is get into the top 10 in each of these races. We are not going to win it from there in a 125km, so it is damage limitation."

Going in to today's two races, with another 250km mini-marathon due tomorrow, Winterbottom leads Red Bull Racing's Craig Lowndes by 161 points in the Championship. Lowndes qualified fifth and sixth for today's races in his Holden Commodore VF.

His teammate and defending champion Jamie Whincup, who is third 186 points off the pace, was 10th in both sessions.

Winterbottom's struggles centre around the quick changes of direction in the Reid Park circuit's second sector.

"The car is not good, it's not in the right setup window so we just have to tune it," explained Edwards.

"It's particularly bad in sector two. He's fastest in sector one, but the changes of direction are a challenge."

Ford's woes in Townville aren't limited to Winterbottom, with no Falcon making it into the top 10 in either qualifying session.

The Fords have also yet to claim an ARMOR ALL Pole Position in 2014, although they have been able to fight back in the races with FPR winning the 200km Sunday race at the last four events.

James Courtney and Fabian Coulthard scored both of the day's poles for Holden.

Mark Winterbottom  ›
15' Pepsi Max Crew ›
2014 Castrol Townsville 500 – Driven by TAFE Queensland  ›
Stay In The Know
Sign up to the Virgin Australia Supercars Championship Newsletter
We use cookies to ensure that we give you the best experience on our website. If you continue to use this site we will assume that you are happy with it.Ok