Winterbottom’s Eyes Ahead to Race 19 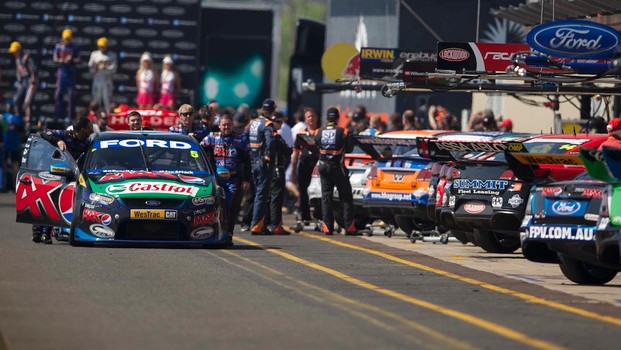 While Mark Winterbottom is glad to have thestatistic of a race win for 2013, he wasn’t feeling that happy after the day’sfirst race, number 18 in the Championship.

The SKYCITY Triple Crown has been atumultuous weekend for the Pepsi Max Crew racer, who was quickest in FridayPractice, but had a shocker of a day yesterday, shoving teammate David Reynoldsoff the road.

In fact, it all went pear-shaped for thefactory-backed Ford team, as Will Davison suffered a DNF (did not finish) andAlex Davison has been back in the field, despite promising results at earlierevents this year.

Keeping that all in perspective,Winterbottom said it was hard to feel happy with the win – particularlygiven there was less than two hours between the finish of Race 18 and the startof 19.

“It’s a bit of an average weekend so far, soit’s hard to feel too happy with all of it,” Winterbottom said post-race.

“We’ve led some races and should’ve wonquite a few this year, so it’s nice to actually have that stat.”

Winterbottom uncharacteristically is ninthin the Championship, over 400 points adrift of leader Jamie Whincup.

Errors have plagued FPR – including poorpit stops – but Winterbottom said he still counted some of the poor results aswins, given the performance of the car.

“It’s good to actually get a trophy, get onthe podium and hold it up… it’s good to get the stat, so hopefully this getsthe monkey of the back and we have a bit of luck.”

The timing of the race means it doesn’treally sink in – there’s another immediate job to focus on.

“You pretty much get out, say what you wantto change on the car and go again, and you celebrate it the next day or days tocome,” Winterbottom said.

“We’ve got a job to do now, you can’t justrest … you have to go our and do it again. So hopefully we can get a couple ofgood results and go home really happy.”

Winterbottom was happy with his pace on thehard tyre, and while he felt the soft tyre was good, he wanted it sharpened up.

“When you’re in front you can manage that –so it makes it a lot easier than being in the pack and having to attack, so itwasn’t too bad, but I think we can approve it.”

Winterbottom wryly commented he was happierthan yesterday, signed some quick autographs for fans and was back to preparing for Race 19 when he starts from fifth.

James Courtney and Scott McLaughlin– who didn’t run well, changing onto the soft tyre too earlier in thefirst race – start ahead of Winterbottom for the final race at HiddenValley Raceway.

Mark Winterbottom  ›
15' Pepsi Max Crew ›
2013 SKYCITY Triple Crown  ›
Stay In The Know
Sign up to the Virgin Australia Supercars Championship Newsletter
We use cookies to ensure that we give you the best experience on our website. If you continue to use this site we will assume that you are happy with it.Ok