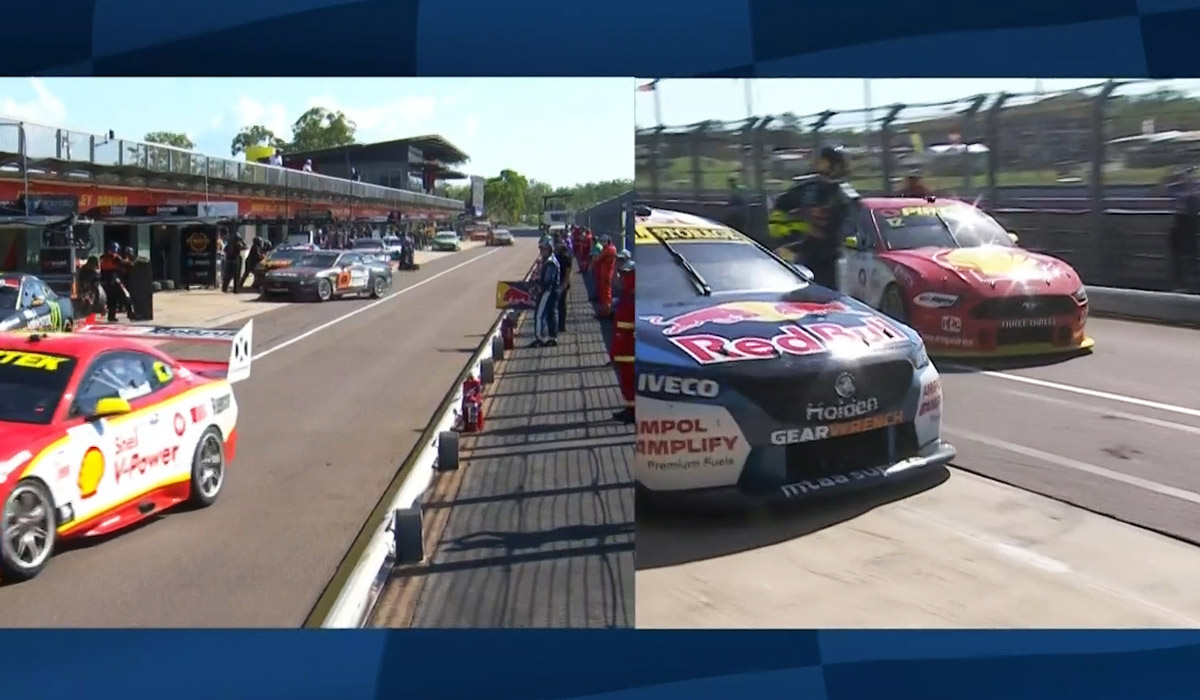 The fact Fabian Coulthard was not wholly in the fastlane when contact occurred was the key to Jamie Whincup escaping an unsafe pit release penalty in the Darwin finale.

That’s the explanation from Supercars’ Driving Standards Advisor Craig Baird, who reviewed the incident during and after the 38-lap race.

Television footage showed Whincup being released from the Red Bull Holden Racing Team pitbox as Coulthard was diving into the Shell V-Power Racing bay directly ahead.

Although the footage was unclear, the post-race investigation confirmed Coulthard’s assertion that contact between the cars did occur.

Whincup had received a 15-second time penalty in Saturday’s race when he was released into the path of Anton De Pasquale, resulting in contact.

Asked by Supercars.com to explain today’s decision, Baird made direct reference to the pit release rules, which read as followed:

7.1. The Car Controller is responsible for the safe release of the Car.

7.2. A Car being released from its Pit Bay must give way to a Car already wholly in the fast lane.

7.3. Any Car that travels down the working lane more than the length of two (2) Pit Bays from its own Pit Bay, or at the discretion of the DSA and the Stewards, without merging or entering wholly into the fast lane may receive a Penalty.

7.4. Any contact between Cars in Pit Lane may be reviewed by the Stewards and a Penalty may be applied

Explained Baird: “There’s a difference between a car travelling down the fastlane and a car coming into its pitbox.

“If you read the rule, the paragraph in there about an unsafe release relates to a car being wholly in the fastlane.

“[During the race] we had to make a decision with the available footage and reports from pitlane that we had, and we felt like there wasn’t major contact.

“Without doubt, after looking at the onboard [post-race], there would have been [more contact] had Fabian not yielded, but there’s also a clause in the rulebook that everyone has a duty of care.

“You gain a little bit one time, you lose a bit another, with the jostling of getting in and out of the boxes.

“It’s very different to the Whincup penalty [on Saturday] where he was released into the path of a car solely in the fastlane.

“DJR Team Penske had a right to protest the decision, but ultimately everyone in our pitlane has to be flexible at some point.

“At the end of the day Fabian came in right behind [Chaz] Mostert, he went out behind Mostert, and it wasn’t a position change for Whincup.

“People will always have their opinions on it. If I give the penalty out they’ll say it was harsh, because there was give and take, and if I don’t, that’s not good enough either.

“Sometimes I’ve got to sit there and go ‘what do I do, what is fair for the sport?’.”

Whincup was awarded the round win and BetEasy Darwin Triple Crown trophy based on having a higher finishing position in the final race.

Coincidentally, Coulthard had also been part of the Saturday pit incident involving Whincup and De Pasquale as he double-stacked behind teammate Scott McLaughlin.

De Pasquale rubbed against Coulthard as he went by, before Whincup darted out from his box and hit the Penrite Commodore.

“Our small pitlanes we work with, every day I get complaints, I lost here or there, it’s never a perfect world in those little working areas,” added Baird.

“On Saturday I had three emails regarding car #12 [Coulthard] from different teams saying that he’d baulked, impeded or contacted [their car], there were all sorts of stories.

“In that case I had to put my hat on and be on Fabian’s side. I didn’t give him a penalty because he didn’t have another option.”