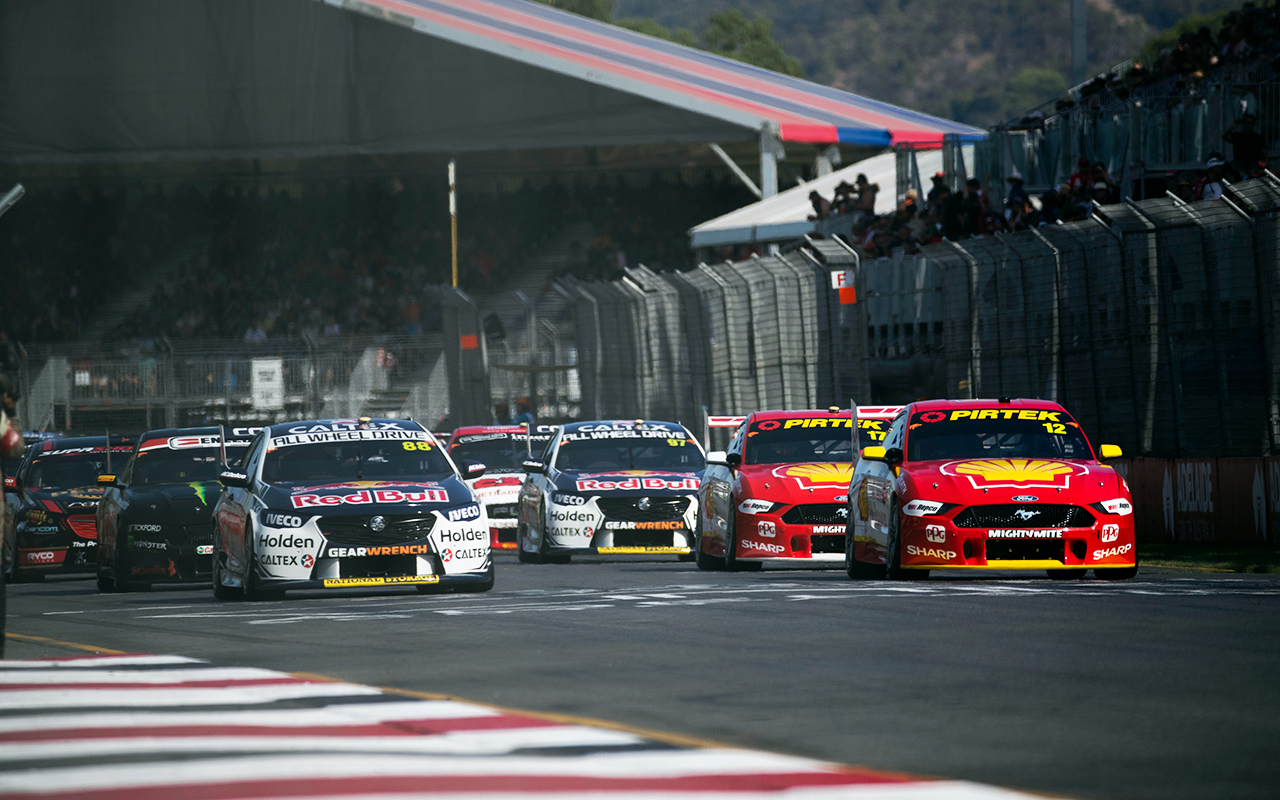 In a year where complaints over parity made headlines, comparisons between teammates took on more importance than ever.

After all, equivalency of opportunity rings truest when comparing drivers sharing a garage, piloting what is - in theory at least - equal equipment.

In Part 1 of our analysis, we take a closer look at the intra-team battles at Boost Mobile Racing, Kelly Racing, Brad Jones Racing and Walkinshaw Andretti United. 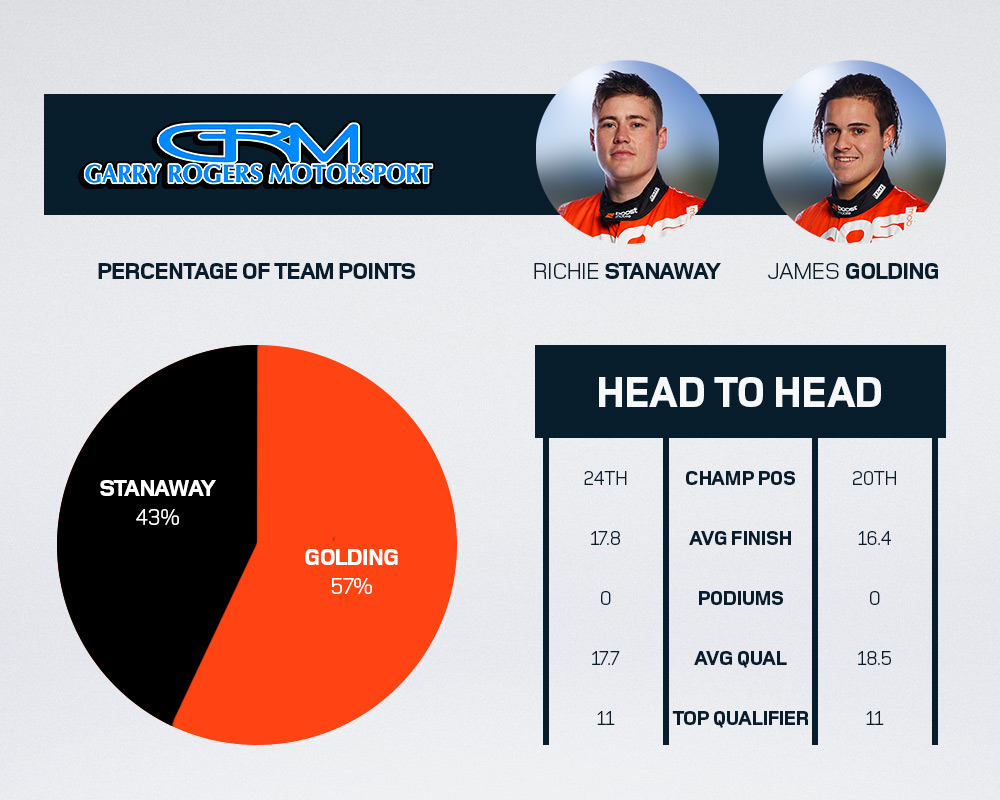 This combination of two second-year drivers loomed pre-season as one of the most intriguing to follow, given both were out to prove themselves in 2019.

Richie Stanaway’s arrival alongside James Golding was a pre-season shock, given he was shoehorned in at the last minute in place of veteran Garth Tander at the behest of sponsor Boost.

Their overall championship positions shouldn’t be compared, given Stanaway missed eight races – seven with injury and one for disciplinary reasons.

When they did compete head-to-head, they were very evenly matched; Stanaway narrowly getting the nod on qualifying averages and Golding on average finishing position.

Stanaway managed the squad’s best qualifying position of seventh at Symmons Plains, while seventh in the chaotic Townsville Sunday race for Golding was as good as it got on race days.

Andre Heimgartner’s supremacy over 2006 Supercars champion Rick Kelly at Kelly Racing was one of the most notable teammate comparisons of the season.

While it was a tough year for all four Altimas, the Kiwi proved the shining light, headlined by podium finishes in the Saturday races at Phillip Island and Sandown.

In his second year with the team, Heimgartner was the top Kelly Racing qualifier on 18 occasions, compared to 11 for Kelly and a single moment of glory for Garry Jacobson at Winton.

Some misfortune during races – including crashes at Bathurst and the Gold Coast – meant Heimgartner only just edged Kelly in the standings.

As expected though, the pair were clearly ahead of Jacobson and Simona De Silvestro, who have since departed the team as it trims down to two cars in 2020. 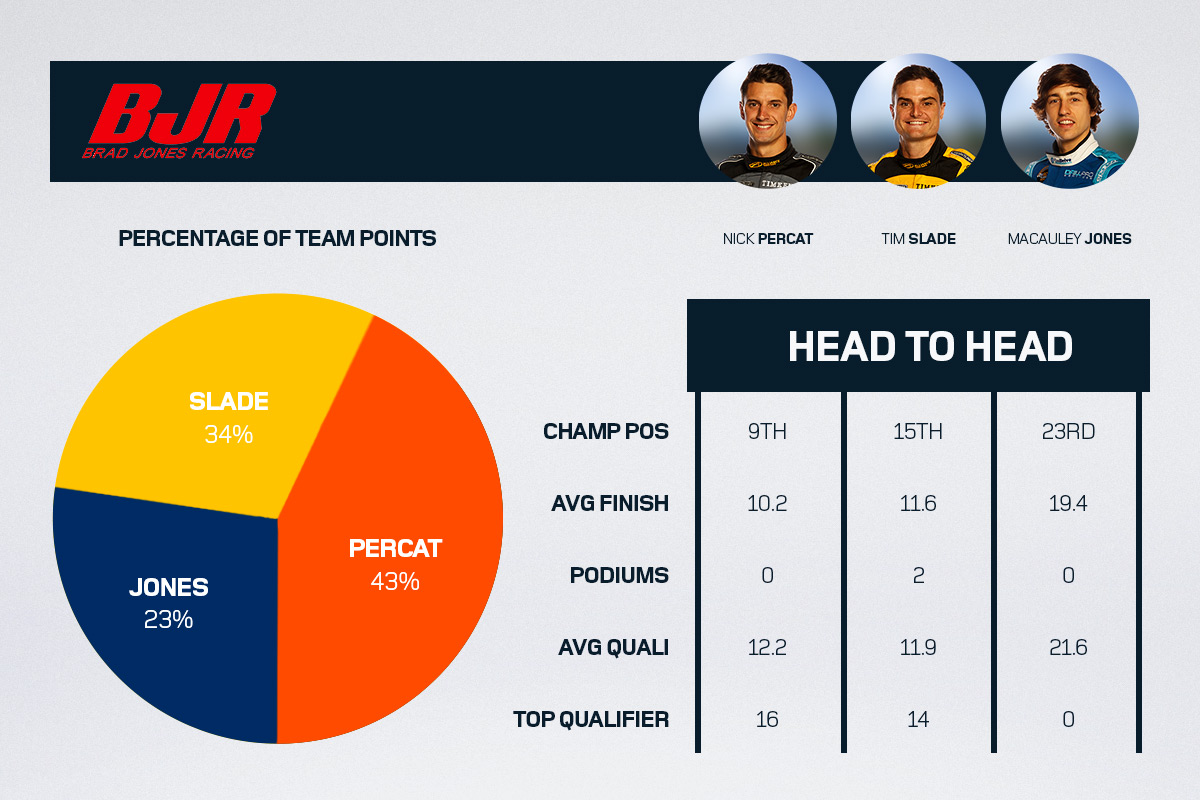 Nick Percat and Tim Slade were among the field’s most evenly matched teammates across their first two seasons together in 2017 and ’18.

In qualifying, it remained that way over the course of 2019, with Slade marginally ahead on qualifying averages, and Percat narrowly getting the head-to-head honours 16-14.

The final standings though tell a different story, with Percat six places and 505 points ahead of Slade, who spent much of the year frustrated by a mysterious imbalance in his car.

Slade ended up with the squad’s only two podiums of the season – at Albert Park in March and Newcastle in November – but the damage was well and truly down during the middle phase.

Jones meanwhile will be hoping for a more competitive second season in 2020, where he’ll be teamed with Percat, Todd Hazelwood and rookie Jack Smith, while Slade moves to Shell V-Power Racing as a co-driver. 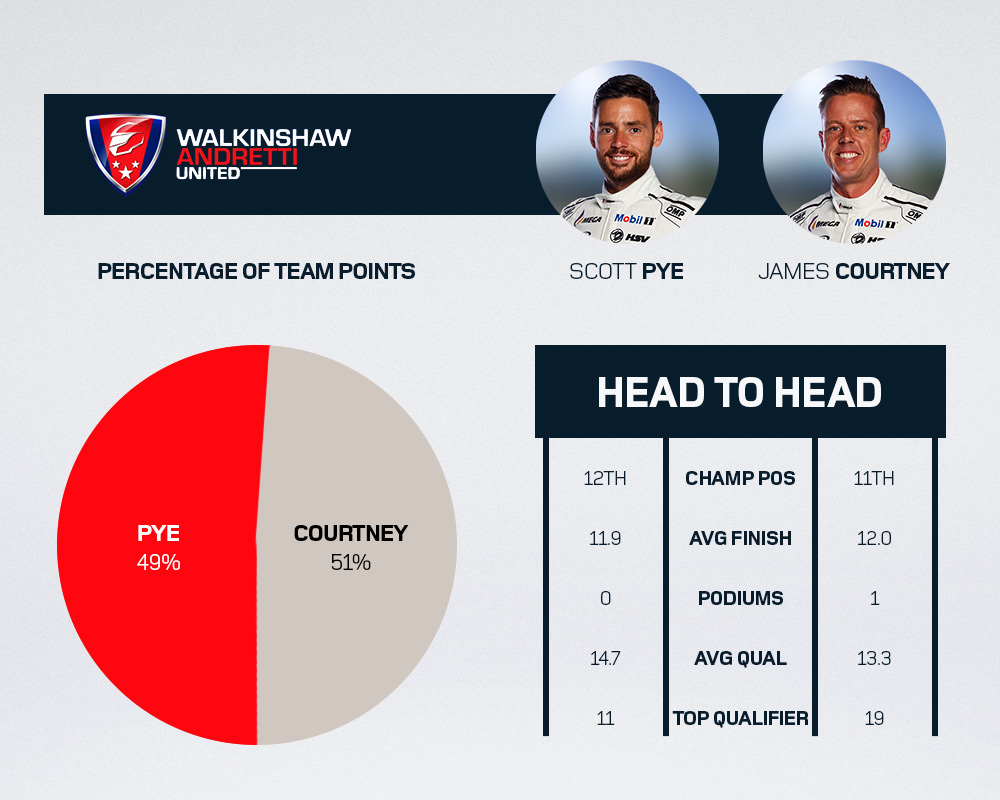 James Courtney and Scott Pye’s third and final season as teammates ended with a different result to their previous two; the 2010 champ ahead in the standings.

In 2017 and ‘18, they’d been relatively evenly matched on pace, but key results for Pye – including a race win in ’18 and Bathurst podiums in both years – made him the standout.

This year Courtney was clearly the higher achiever in qualifying, edging his teammate on averages and winning the head-to-head a convincing, 19-11.

In terms of results, there were 13 top 10s each, with Courtney’s third at Bathurst alongside Jack Perkins the only podium.

Ultimately though they were both scrapping for the minors too often and WAU has made wholesale changes for 2020, with Chaz Mostert headhunted to lead the squad forward.