Jamie Whincup led a one-two finish for the Red Bull Holden Team in the second leg of the OTR SuperSprint, as Shane van Gisbergen took the Supercars Championship lead.

Whincup effectively led from start to finish in the 41-lap race at the new South Australian venue, crossing the line 11.2894 seconds clear of team-mate van Gisbergen.

David Reynolds rounded out the podium for Erebus Motorsport, as Holdens filled the top six places.

Erstwhile championship leader Scott McLaughlin was a quiet 10th, his 41-point advantage over van Gisbergen turning into a 19-point deficit, as attention now turns to the PIRTEK Enduro Cup. 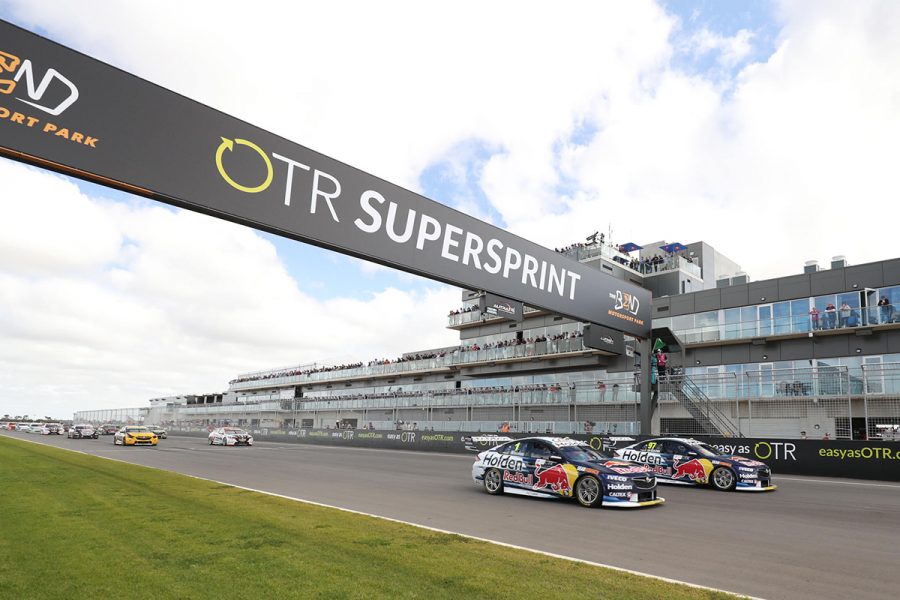 For the second time in as many days, Whincup made the most of starting on pole, despite being on the less-used inside line.

The Kiwi spent the first two laps behind Slade, until finding a way by at Turn 17, by which time he was nearly three seconds behind Whincup.

That gap was down to 1.2s by the time van Gisbergen pitted for the first time on lap four, with pitstops having started on the very first tour.

While Whincup continued to lap strongly at the front, van Gisbergen spent the next phase of the race trying to keep Scott Pye and Craig Lowndes at bay after their stops.

Whincup pitted for the first time on lap 11, emerging with a 2.6s advantage over van Gisbergen, but with Michael Caruso's short-filled Nissan right behind.

That was only fleeting, with Caruso running wide at the final corner and losing places to van Gisbergen and Pye.

With those pitstops complete, Whincup was 10s ahead of van Gisbergen, with 18 of the 41 laps remaining.

There was little change in that on the run home, Whincup taking his fourth victory of the campaign by 11.2894s. 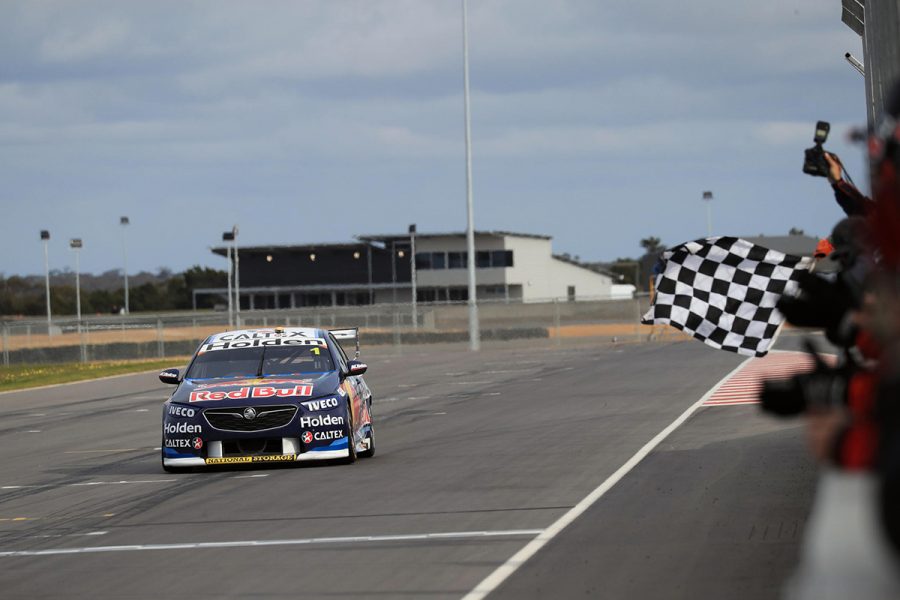 “It’s great to come back after yesterday,” he said.

“Big thanks to all the engineers at Red Bull, they worked hard before the event to get the cars quick and then worked together tirelessly throughout the weekend to make sure we had two fast cars.”

Van Gisbergen has now finished first or second in the last seven races, and on the podium in 10 of the last 11.

Having trailed McLaughlin by 161 points after the Hidden Valley event in June, but starts the enduros next month with a 19-point lead.

It is van Gisbergen's second stint at the top of the championship this year, having led the way through the first seven races of 2018.

“That’s pretty awesome. I saw the purple board (signifying the championship leader in parc ferme) and got a bit excited,” van Gisbergen said.

“There’s a long way to go, we need to keep our heads down, but the team gave us some rockets this weekend, a one-two is really special.”

Slade looked set for his first podium of the season, running comfortably between van Gisbergen and Reynolds entering the final 10 laps.

With eight to go, though, he locked up entering Turn 1 and ran wide, losing third to Reynolds. 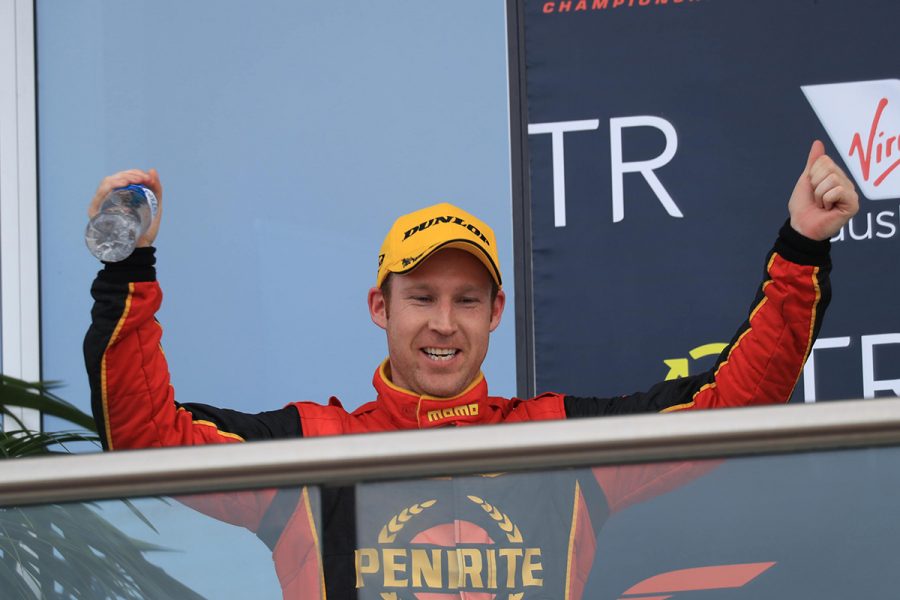 Having finished 17th on Saturday, Reynolds started the race in 12th place but made steady progress throughout.

“We got on the set-up probably a bit too late, if we had that at the start of the weekend it might have been a better result,” he said.

“But I’m very, very happy. Everything went smoothly then.

"We qualified 12th and finishing third behind the two Triple Eight cars is a massive tick in the box for us.”

Slade had to settle for fourth, ahead of Brad Jones Racing team-mate Nick Percat, who was another big mover from 15th on the grid.

Scott Pye finished sixth, with Milwaukee Racing's Will Davison the best of the Fords in seventh place, Lowndes eighth and Caruso ninth.

McLaughlin could not fire a shot and finished where he started,10th, 35s behind Whincup. 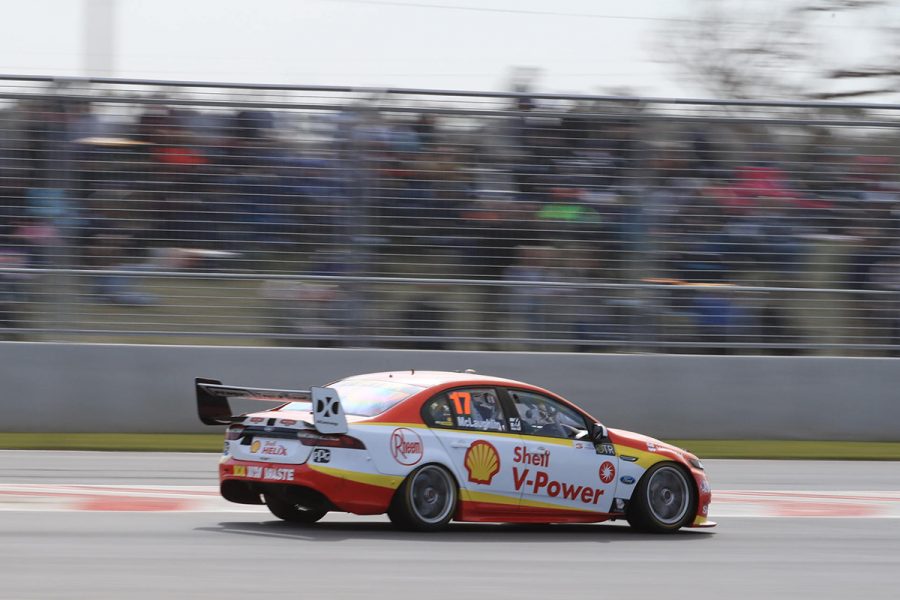 That was aided by James Courtney running wide and giving up 10th with six laps to go.

Having finished second on Saturday, Rick Kelly could only manage 17th, battling gear-selection issues in his Nissan.

Andre Heimgartner's Nissan clouted the back of Garth Tander's Holden at pit entry as they stopped together on lap three, picking up extensive damage.

Tander continued with a battered Commodore, having a wild ride wide through Turn 10 just after the halfway mark on his way to 20th. 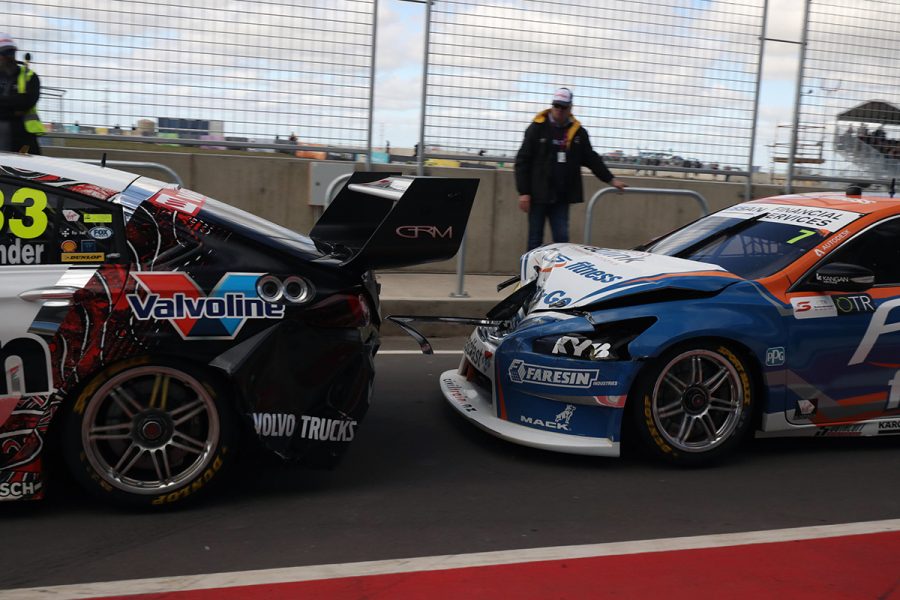 The second wildcard, Kurt Kostecki sustained right-rear damage on the opening lap, in a pack also including Richie Stanaway and James Golding, which was deemed a racing incident.

Neither Heimgartner or Kostecki reappeared, with Lee Holdsworth the other non-finisher, his Preston Hire Racing Commodore losing drive on lap 21.

Melbourne hosts the next Supercars event, the RABBLE.club Sandown 500 on September 14-16, which opens the PIRTEK Enduro Cup.