Whincup Under Pressure: “I’m Not in a Good Position” 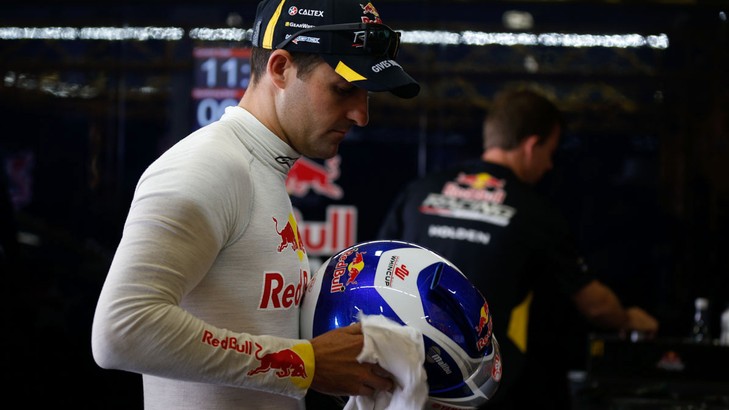 Just three of 38 Championship races have been run and won, but five-time champ Jamie Whincup is already feeling the ramifications of an early setback.

“I’m not in a good position right now – even though it’s round one and there’s a long way to go I do like to start the year strong and that hasn’t happened, so we’ll have to dig deep from here on in,” Whincup told v8supercars.com.au.

“I hate to say it this early but we really need to try and get it on track.

"You know you can only have a certain amount of setbacks for the year until you’re a no show and it’s good to have those in the pocket… You know a bad one’s always going to happen, but unfortunately I’ve already used one of mine up round one so you’ve just got less room to move now.”

Whincup blazed to the chequered flag in the first of the three Clipsal 500 Adelaide races, and it looked as if the season would be a 2013 carbon copy, with the Red Bull racer running away with the majority of wins.

But what unfolded in the following two races were extraordinary, with Whincup placing third in the second race behind Scott McLaughlin’s Volvo S60 and then suffering from a pit lane penalty in Sunday’s 250km race after the car controller was deemed to have worked on the V8 Supercar during the team’s pit stop.

Whincup pushed on – but pushed a bit too hard, tapping Michael Caruso's Norton Nissan and landing himself a 25-point penalty post-race, as well as maintaining damage, which ultimately saw his Holden Commodore VF finish 15th.

Whincup gets angry with himself when he makes mistakes on the racetrack, but on Sunday it was his usually flawless team that put him a challenging situation. Is it harder to deal with when it is the team who makes the error, which is out of Whincup’s control?

“For me personally, it’s better for me – if I make a mistake I struggle to accept that myself," Whincup said. "But I feel like if I analyse myself personally I did a good job this weekend, but if I work with the team we’ll get it all together.”

Another sticking point for the Red Bull racer was the fans’ negative reaction to him after Saturday’s race. When accepting his third place trophy, he was booed on the podium.

Teammate and race winner Craig Lowndes had congratulated McLaughlin and Volvo’s stellar effort, but when getting out of the car Whincup started with, “The crowd’s happy, that’s the main thing”.

Many fans thought it was a show of bad sportsmanship – but the response upset the five-time Champion, who was disappointed when getting out the car, because he had believed McLaughlin had made contact and sent his Commodore wide at the last corner, a pass that had the 79,000-strong Saturday crowd on its feet. He had given McLaughlin room during the last lap battle.

“I was disappointed because I’d tried so hard to get second but it didn’t happen,” he explained. “But secondly I thought he’d hit me and thought that’s not fair…

“We had an awesome dice the whole way through the last four or five corners. I broke in the last corner and the car pulled up nice and then it snapped sideways all of a sudden and I was sure that he hit me from behind and run me wide. I would’ve bet my house on it that it had been contact and he’d run me wide… So after the race I was not happy – either I’ve made a big mistake or he’s run me wide.

“Came back in finally after the podium, I checked out the replay and it was clear he was nowhere near me and there was no contact. My tyres were so red hot from wheel spinning out of turn nine to turn 11 to make the pass that I was out of control at the last corner. The tyres were on fire.

“I really needed to see the footage to see – I was adamant he hit me from behind and I’m normally pretty accurate with that stuff, but it was a massive misread, which is great. I was happy I did see that and to know it was a good hard clean race and he did a good job.

“I gave it all I had – I could’ve just come home third but I wanted to push hard for second. And I’d like to think I contributed to what was one of the best races around Clipsal.

“I was relieved – I would’ve hated if he did hit me and there was an inquiry; I hate all of that stuff. It was good to know it was a good, hard, clear battle.”

From here the team will regroup for the 2014 Formula One Rolex Australian Grand Prix.

Whincup takes a positive away from a tough weekend given he had the car speed to challenge for wins – one of the two keys to success, in his eyes.

“That’s a really important thing in motorsport – were we quick enough to win the race? That’s a yes. That’s the most important thing you want to walk out of the weekend knowing you had the pace.

“Secondly, did we do a good job over the weekend – the answer to that’s no. We made too many mistakes … We’ll go away and learn from Sunday, understand it wasn’t our best performance and we’ve got to step up for next time.

“But the promising thing is we had car pace. We’re confident we can be competitive, but it just was not our weekend.”

Bright Will be Right for Albert Park