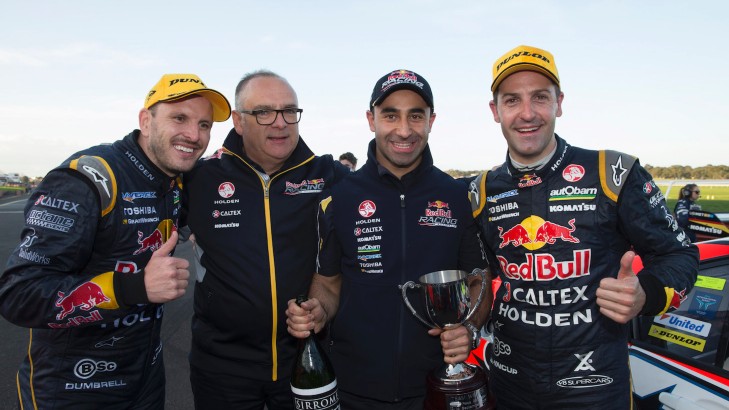 Jamie Whincup's race engineer David Cauchi admits there was a lot of pressure - and plenty of times he thought the title was gone - during the 2014 season.

Moving onto the #1 Red Bull Racing Commodore as the lead engineer this year was not without its rough patches, but at penultimate event Phillip Island Whincup was able to secure the points that will see he and his team awarded the trophy at next week's Sydney NRMA 500.

For Cauchi, it will be his first Championship win as a race engineer - something, he told v8supercars.com.au, was not without its challenges.

When asked if he was ever worried the title may be getting away, he replied, "Yeah, definitely".

"I think anything but a Championship win would have been a massive disappointment - and there's that expectation," he said.

"But I just knew we had to come out, do what we do and go racing ... there were always times you doubt yourself and think it's not going to work out, but we did it."

Ford foe Mark Winterbottom took the Championship lead early in the year in New Zealand - one of the tougher events for Whincup - and continued to bank points on the high-value Sundays, with the Red Bull racer dropping to sixth on the table after the four-race hit-out across the Tasman.

"When we had that big points margin to Frosty - and then he was winning Sundays and we weren't really doing that well - we didn't have the car pace and there were a few things that weren't clicking," 30-year old Cauchi told v8supercars.com.au.

"But we didn't give up, even though it wasn't looking good. Because of all the hard work and the faith everyone had in the team it all worked out."

While Cauchi had the perspective working within a Championship winning group as data engineer at the Triple Eight team (before running Dean Fiore's car at Lucas Dumbrell Motorsport for the majority of last year), the pressure increased significantly once he became the lead on the #1 Holden Commodore.

"Definitely as a race engineer it's a lot more intense," he explained."You're a lot more attached to the car and every last bit of what we do.

"So it's a huge learning curve - working with the driver, working with your mechanics, and all the other guys in the team, it's a really cool experience, so it's never easy.

"There's nothing easy about what we do - it's so competitive, there are so many good drivers out there, good cars and good teams ... but we kept on chipping away even when things weren't looking good, we kept on working hard.

"That's what this team is all about - just never giving up. And digging as deep as you need to get a result."

Cauchi revealed that even when Whincup was topping sessions and recording results, it didn't mean everything was simple behind the scenes - across the Wilson Security Sandown 500 in particular, the team wasn't happy with the car.

The relationship between the two has been under much scrutiny this year, as Mark Dutton was moved up from the role of #1 engineer to team manager within the Red Bull team. However, when asked about it after the Gold Coast event - and Whincup's refusal to hear calls to conserve fuel in the Supercheap Auto Bathurst 1000, team boss Roland Dane said their relationship was better than ever.

For Cauchi, the 2014 result is nothing less than a dream come true.

"It's so very, very special to win a Championship as a race engineer - it's something I've been dreaming about for a very long time... We were up and down, allover the place and everyone pulled together and we got the job done, so awesome."

Wrapping up the points required to take the title at Phillip Island means some pressure is off the team - but for Red Bull and Whincup, it is important to take just as much fight to the final event in Sydney.

"We're not going to stop racing now - we've still got three more races in Sydney and we want to be right up there for all of them," Cauchi said.

"From a team point of view, we want to get Craig [Lowndes] up there to second as well.

"And we've still got the pole award to fight for, so don't turn off your TVs yet, there's still plenty of racing to happen."

Whincup leads by just one pole position over Volvo fast man Scott McLaughlin, who has been vocal about wanting to take out the honour this season.

"I bet he does - and so he should, it's what's left to fight for, so to take the pole award would be special for him," Cauchi said of McLaughlin.

"And believe me, it's just as special for us so we'll go as hard as he is."

Since 2008, Whincup has only failed to secure the most pole positions - in 2012, when then FPR driver Will Davison proved a quicker qualifier.

Jamie Whincup  ›
15' Red Bull Racing Australia ›
2014 Sydney NRMA 500  ›
Stay In The Know
Sign up to the Repco Supercars Championship Newsletter
We use cookies to ensure we give you the best experience on our website. If you continue to use this site, you agree to the terms and conditions identified in our privacy policyOKPrivacy policy