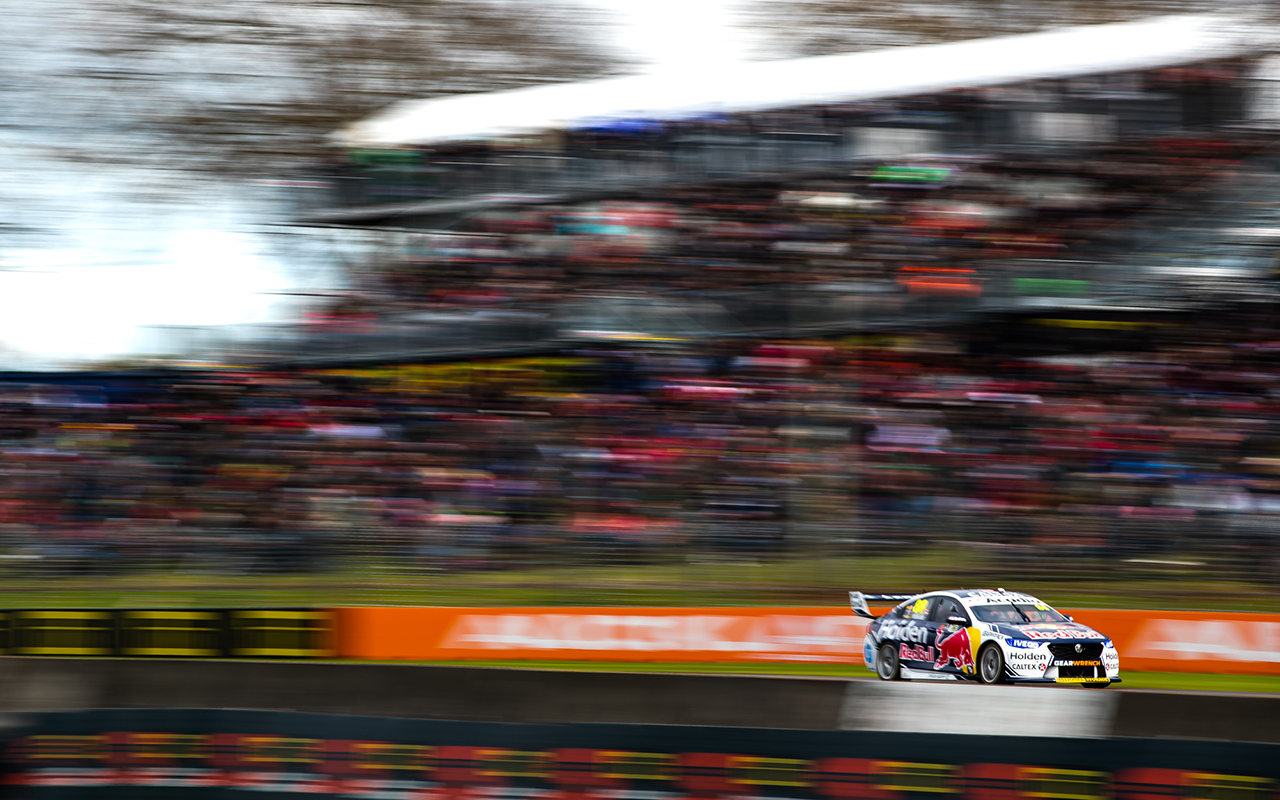 Jamie Whincup has bounced back from the penalty that cost him a Saturday podium at Pukekohe in ideal fashion to clinch provisional pole for today’s 70-lap race.

An ARMOR ALL Top 10 Shootout berth was on the line in the 20-minute qualifying session as drivers encountered a drying track following morning rain.

That did not prevent near-record times from the early stages of the session.

The #88 Red Bull Holden Racing Team Commodore was the first to sneak under the 62-second barrier and then significantly improved his time to a 1:01.5620s to draw within two hundredths of Shane van Gisbergen’s record lap in qualifying yesterday.

It marked the perfect response after Whincup had been stripped of second place yesterday due to a lap two tangle with Nick Percat that incurred a 15-second post-race penalty; Whincup was eventually classified sixth.

His effort stayed atop the leaderboard – ahead of subsequent flyers from Chaz Mostert, van Gisbergen and Scott McLaughlin – when the session was red-flagged with six minutes remaining.

The cause was David Reynolds’ Penrite Racing Holden that had found itself buried in the tyre barriers after running wide at the exit of Turn 3.

Reynolds had been the beneficiary of Whincup’s sanction yesterday, being belatedly promoted to third, but his hopes of a double podium are in tatters after losing his fastest time of 1:02.1645s as punishment for triggering the red flags.

His second-best effort of 1:02.4999s was only good enough for 22nd in the end, leaving the #9 with a mountain to climb this afternoon.

“I ran out of luck or talent, I’m not sure. I had a lot of luck yesterday so I had to run out at some point,” he said.

“I maybe had too little temperature in that right-front. As soon as I tipped it in I knew I was in a bit of shit.

“I just feel terrible for the crew. I’m devastated for everyone that puts a million hours of work into it.”

Whincup did not return when the session resumed, content with his earlier run.

In-form veteran Will Davison came close to knocking off his long-time friend, jumping to second with a lap less than three hundredths shy of Whincup’s.

Amid the flurry of late times posted in a bid to make the Shootout, the biggest moment came when McLaughlin had a frightening high-speed off on the pit straight, running wide onto the grass and being thrown into a spin.

What a save :scream:

“It was more arse than class,” said McLaughlin of his spin.

“I needed to find a tenth and a half there so I just released the brake and got on the gas and just went too wide.

“Then I just got on the wet grass. It was lucky absolutely, but this category you’ve got to go hard and put your things on the line.

Joining them in the 1:40pm shootout will be Nick Percat, Fabian Coulthard, Mark Winterbottom and yesterday’s second place finisher Cameron Waters, with Todd Hazelwood the unlucky man to miss the cut.

Kelly Racing had yet another tough time of it with Andre Heimgartner the lead driver in 13th but their remaining three Altimas trapped in the bottom five.

Richie Stanaway was unable to repeat his 2018 Shootout heroics in front of his home fans but will start from the midfield in a solid 16th.