Six-time V8 Supercars Champion Jamie Whincup faces the biggest fight of his career ahead to challenge for an unheard of seventh title in 2015.

Whincup had a tough weekend at the SKYCITY Triple Crown in Darwin to follow an out of sorts start to the year by the impeccably high level he and his Red Bull Racing Australia team have performed at in the last eight years.

The longer race was won by Bottle-O Racing's David Reynolds in the green Prodrive Falcon from Pepsi Max's Chaz Mostert and the form Freightliner Commodore of Fabian Coulthard.

Reynolds also veered off-track mid-race avoiding Michael Caruso's Nissan. He redressed and rejoined behind the Altima, but it was a critical moment of the race, with race control deeming it acceptable. He ultimately crossed the line first by 0.87 seconds ahead.

With a 286 point gap now to leader Mark Winterbottom many might suggest that for the first time in recent history he may not be in the mix come December. But that is without considering the incredible back half of last year when he went from a deficit to a massive 583 point victory. 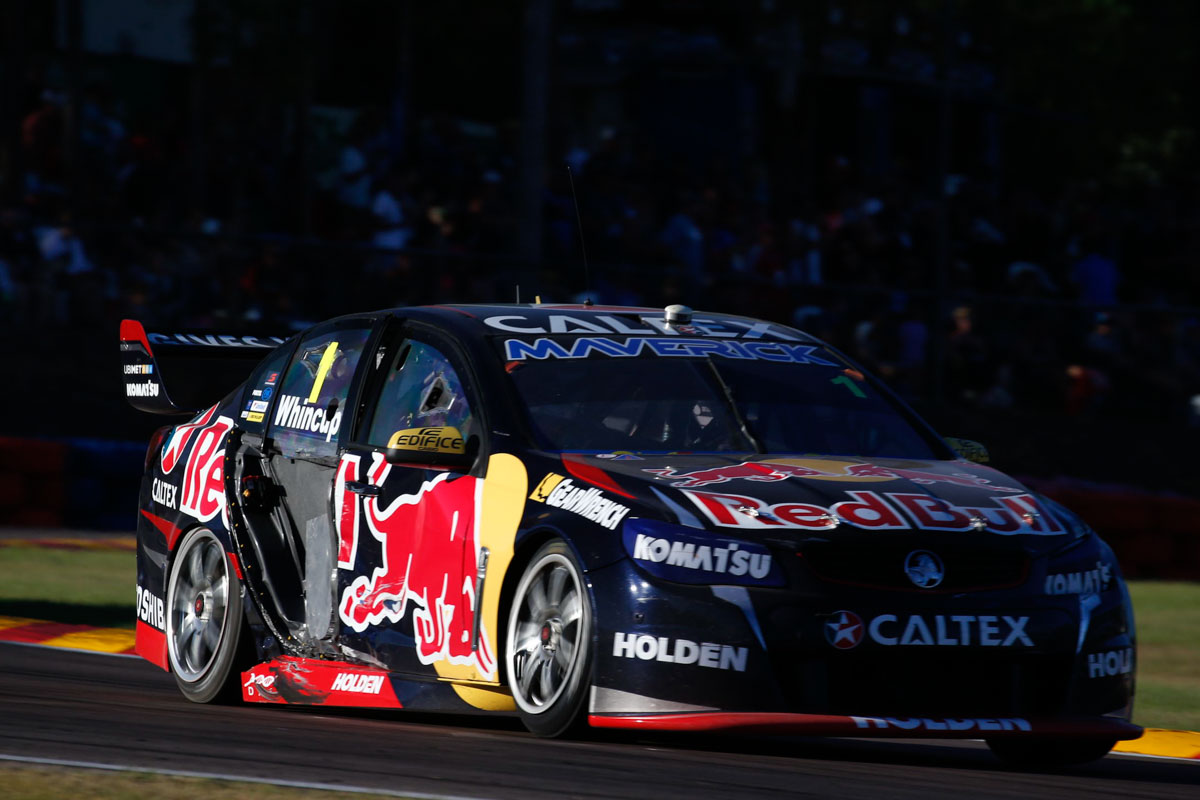 "You can't rely on that. You need to be right up there, you need to be fast - I'm not thinking that (being able to fight back) at all. We just need to get the car speed," Whincup said.

"It's a long way back from here, but let's not talk too much about it, it's just about going fast and trying to win races, but that's a long way away at the moment.

It was in Darwin last year that Whincup began his charge with two wins and a third but that was not to be the case this time.

In trying a reverse strategy in Darwin Whincup, as he had done throughout the weekend, was cruelled by a delaminated tyre as he was hanging onto valuable points in ninth and dropping back to twenty-third via the extra pit stop and just under a lap behind then leader David Reynolds.

Cruelly Lowndes, after the highs of an historic 100 V8 Supercars wins yesterday, suffered the same fate when his team tried to push the Dunlop soft compound tyre which also wore out after 46 laps of running. But his Saturday results has kept him in reach of the leader despite also dropping back through the field via the extra pit stop.

Whincup was lapped by the leaders in the closing stages, something that happens rarely, if ever.

"You've got gut feels, but I always keep independent of that, I trust the skill base of the engineers to make the calls and they've made the calls with the information they've got. Yeah, whatever they come up with I'm committed to that, try to make it work as much as we can."

Reynolds has his own battle to retain his seat at Prodrive with speculation suggesting that yound Dunlop V8 Supercars Series gun Cam Waters is a favourite for the drive.

But Reynolds says he is absolutely focussed on staying with the team with today's result timely.

"The team deserve it more than I do but I've put a lot of work in myself the last couple of months to make myself be better, think better and be better. Hopefully this is a little step that I have made," Reynolds said.

"It's physical, mental ... trying to curb your emotions to make yourself not to excitable and not too relaxed each weekend. Trying to maintain the calm and an even emotional state.

"Cam's a good young kid and he will slot in somewhere, I don't know where. I can't speak for his future, I am just trying to look after my own and do the best job I can. If I had the car I did today I would be more up the front.

"The car I had today was faultless. I did sixty-something laps on the soft tyre and that's unheard of around here and I went faster at the end of the race than the start. If I could drive a race car like that I will be here in times to come."

Mostert had another strong run, after elevating to fourth in the Championship after penalties overnight, and came home second, with Coulthard behind and recovering from two first lap incidents yesterday.

His teammate Mark Winterbottom came home fifth to extend his Championship lead, and had some kind words for his winning stablemate Reynolds: "He's a good dude, a good driver and he deserves a win."

It was a good performance from Nick Percat in seventh, and James Courtney, Jason Bright, Tim Slade and Dale Wood completed the top 10.

The V8 Supercars next hit the track for the Castrol EDGE Townsville 400 from July 10-12.

Reynolds back in the winner's circle