Jamie Whincup has ended Shane van Gisbergen's stranglehold on the 2021 season with victory in Race 7 at Symmons Plains.

It marked Whincup’s first win since Townsville in August 2020, with the victory his 13th at the Tasmanian circuit.

The 38-year-old, who will retire from full-time driving at season’s end, extended his all-time winning record to 123.

Anton De Pasquale bogged down and fell into the midpack, and was tapped into a spin at the Turn 4 hairpin by Jack Le Brocq.

WATCH: LAP 1 DRAMA AT THE HAIRPIN

Fabian Coulthard was also caught up in the melee, and failed to finish the 44-lapper.

Waters led the field through the opening lap, which ended with James Courtney making contact with Macauley Jones over the rise at Turn 1.

Courtney speared right and collected Jack Smith, who was forced off the road and into the garage with damage.

Like he did on Saturday, Waters built a gap but fell into the clutches of a Red Bull Ampol Racing entry, although this time, it was Whincup.

Van Gisbergen continued his march from sixth on the grid, clearing Erebus Motorsport’s Will Brown at Turn 4 on lap 9.

By lap 12, Waters and Whincup were line astern, with van Gisbergen just 1.5s behind.

The Red Bull Ampol pit wall opted to keep its two drivers out, with Whincup eventually stopping on lap 19.

The seven-time champion emerged just behind Waters, but cleared the Ford driver at Turn 4 for the effective lead on lap 25.

Van Gisbergen pitted on the next lap, and was into effective third once again after clearing Davison, who stopped on lap 14.

On lap 31, the race reached its flashpoint; van Gisbergen attempted an overtake on Waters at Turn 4, with the Monster Mustang escorted wide.

Davison took advantage and clinched third position, which he held to race’s end.

Van Gisbergen closed the gap to his teammate, but the margin proved too large to overcome, Whincup scoring his first win in nearly eight months by just over a second.

“Good feeling to get the win of course; the bloke beside me has had a shocker, he’s finished second,” Whincup joked.

“Car was great; didn’t get the start I would’ve liked, but we had slightly better tyre life than Cam.

“I was able to get past, and then SVG was coming at the end. Just had enough to hang on.”

Whincup admitted he nearly followed Waters in when the latter pitted, but was happy his call was enough to see him add to his career wins tally.

“I was committed to the pit entry [when Waters pitted], but I’m glad I did, we had six-lap better tyres. 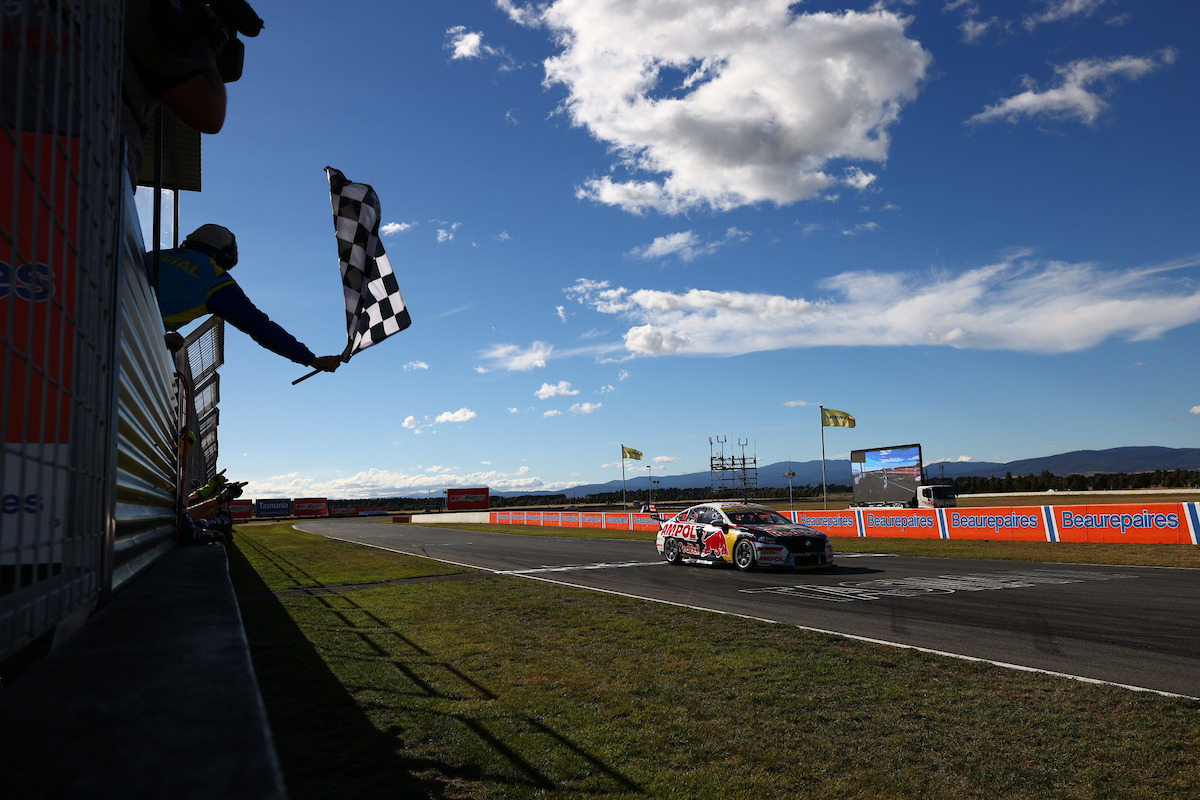 “I think we would have been bottled up behind him for the rest of the race.

“I’m not sure how many wins I can establish this year, but I can guarantee you, I treat every one like it’s the last.

Chaz Mostert, who rose from 10th to sixth, scored the five bonus points for setting the fastest lap of the race.

Whincup closed the gap to van Gisbergen to 145 points ahead of Race 8, which will commence at 4:25pm AEST.