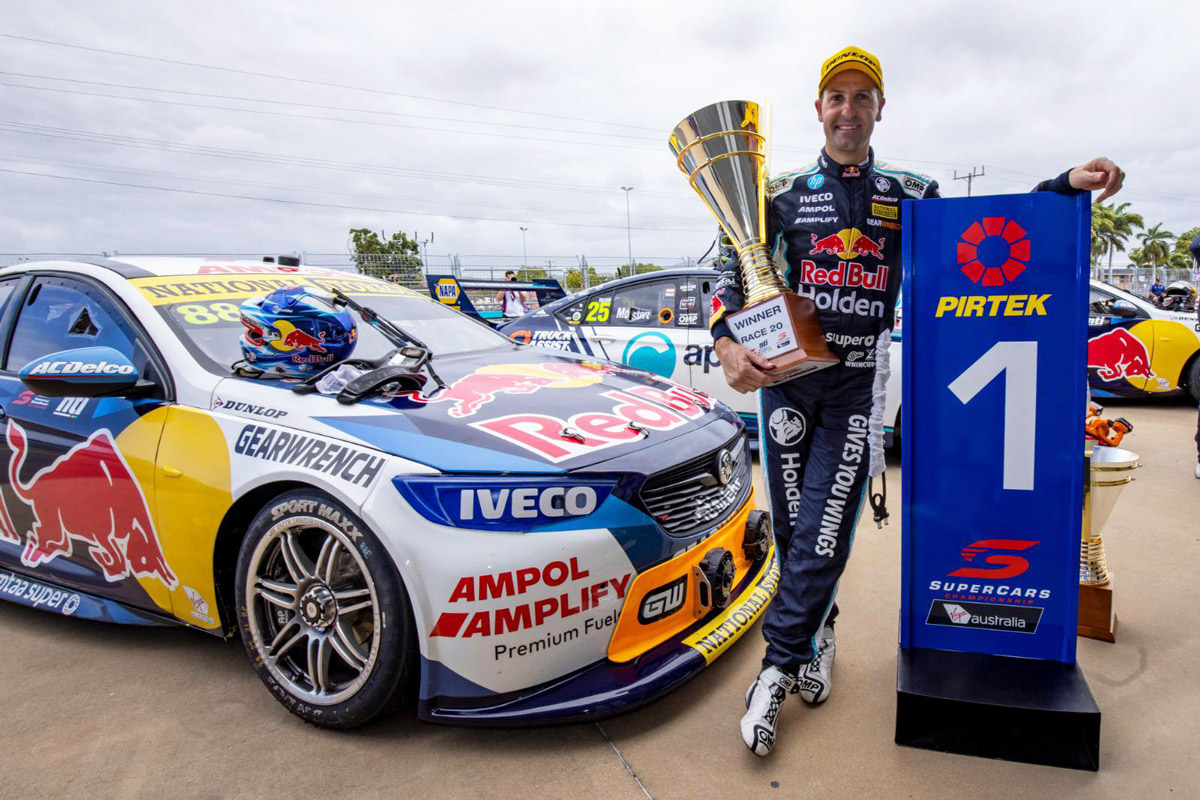 Jamie Whincup has taken a second win from as many starts at the NTI Townsville SuperSprint, dominating the first of two Sunday sprint races.

Like Saturday’s opening encounter, it was a straightforward affair for the seven-time champion, leading away from ARMOR ALL Pole and not looking back.

Whincup waited until his closest pursuer Chaz Mostert pitted on lap 20 of 39 before making his own stop two laps later.

The Red Bull HRT driver had built a near seven-second lead by the time Mostert pitted and, after taking three new tyres, sailed on to another dominant win.

“I got a good start and a good battle with Chaz down into Turn 2 and from there the car was excellent,” said Whincup.

“We don’t normally go long [on strategy], we normally come pretty short but it was great to be able to go long and have some good tyres for the end there.

“We’ve used a fair bit of our tyres up as well. We’ll do our best in the last one to try to hang in there as well as we possibly can.”

Mostert had to work slightly harder in the second half, having dropped behind early-stoppers James Courtney and Cameron Waters in the pit cycle.

The two Tickford Mustangs offered little resistance on their older rubber, and Mostert scored his second podium in as many days, just three seconds behind Whincup at the flag.

Tickford was denied a podium by a charging Shane van Gisbergen who, starting seventh, pitted a lap before Whincup and had newer tyres than his nearest rivals in the second stint.

Van Gisbergen was eighth when he rejoined before carving his way through, eventually taking the final podium place from Waters seven laps from the finish.

“It was fun, but it was hard,” said van Gisbergen of his charge. “We’re still lacking so much straightline for some reason… I had to do all the lunges from so far back.”

Added Waters: “We were a little compromised on tyres in that race. We didn’t have the tyres to fight for a podium, that race was about getting as many points as we could.”

Nick Percat and Scott McLaughlin demoted an ailing Courtney to seventh, marking a disappointing outcome for the Boost Mustang, which started third.

McLaughlin had qualified 13th and dropped two spots in the early stages before going the most aggressive of all on strategy, pitting on lap seven.

“I was too safe at the start. There’s a lot of kamikazes out there with nothing to lose and I’ve got plenty to lose,” said McLaughlin.

“I knew we had car pace if we got clean air and we got it. Sixth is really good.

"We’ve got a car that can win a race, we just need track position. Our tyre life then was unbelievable.”

Fabian Coulthard ran 17th early and was pulled in a lap after his Shell V-Power Racing teammate, but couldn’t make the same ground, ending up where he qualified, in 15th.

Penrite Racing’s Anton De Pasquale, who endured a slow pitstop, and David Reynolds lost ground after sharing the third row of the grid to come home eighth and 10th respectively.

Reynolds lost ninth at the final corner to Scott Pye, who was the last of all stoppers on lap 27, rejoining 16th before cutting his way through.

All 24 cars completed the race on the lead lap, with no repeat of the early carnage from Saturday.

A final 39-lap race will complete the NTI Townsville SuperSprint this afternoon, with McLaughlin set to start from ARMOR ALL Pole.