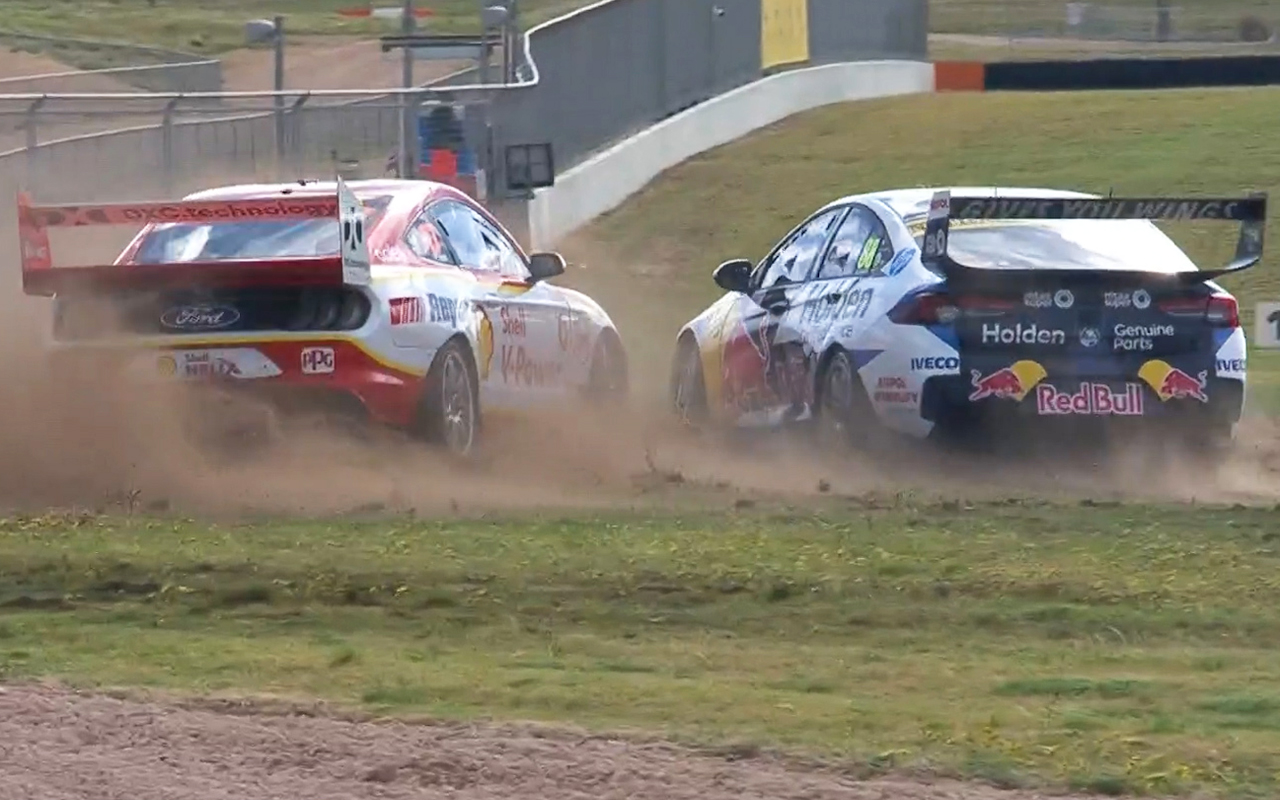 Jamie Whincup accepted blame for his opening lap clash with Scott McLaughlin at the Repco The Bend SuperSprint, but makes no apologies for racing hard.

The title rivals collided when Whincup made an inside-dive for the lead at the right-hand Turn 17 on lap one of 24.

Whincup locked his rear brakes as he went down the inside, sliding up into the Mustang and knocking both cars off the circuit.

They scrambled back on with Whincup 10th and McLaughlin 19th, with the Holden driver quickly handed a 15-second time penalty for his troubles.

McLaughlin eventually took the flag third but was demoted to 15th by a penalty for a separate clash with Lee Holdsworth, while Whincup finished 19th.

That allowed McLaughlin to stretch his championship lead by eight points to 151, with six races now remaining in the season.

Asked of the incident, Whincup said: “We were racing, you know? He made a little error the corner before, of course I was going to go down the inside.

“[I] don’t like to see two cars in the grass. He was about to spin so I opened-up the steering and straightened him up, hoping we could keep going.

“The penalty is harsh but it’s not harsh, I would have probably made the same decision if I was upstairs.

“It’s racing. I’m not going to hand it to him on a plate. We’re going to go hard to try and get some points back and unfortunately it’s not our day.”

McLaughlin was left frustrated by the penalty for his later clash with Holdsworth, but took a relaxed view of the Whincup incident.

“I knew he was going to have a crack, I tried to give him the room to do it and obviously he must have hit the inside and locked a wheel and hit me,” said McLaughlin.

“I pretty much knew he was probably going to be penalised after that so it was about me trying to maximise what I had from then on and I felt like we were doing that.”

Considering McLaughlin’s later penalty, Whincup could still have ended up ahead of the Shell Ford in the result had he not suffered poor tyre life.

Like teammate Shane van Gisbergen, who fell from the lead to ninth in the closing laps, the left-rear on Whincup’s Commodore struggled to the finish.

“I felt that with about 10 to go, I knew we were in a bit of trouble and there’s not much you can do about it,” added Whincup.

“The soft tyre around this place being so high-grip, and those long, loaded right-handers, it’s hard on the left-rear.

“I didn’t have much rubber left but we’ll try and make a tune-up for the next one to hang onto it a bit longer.”