Cameron Waters has paid tribute to his Prodrive team for a ‘massive push’ to introduce upgrades for the Wilson Security Sandown 500 that helped him to a breakthrough win.

Prodrive had been in the shadow of Shell V-Power Racing and Triple Eight throughout much of the season, but appeared to make a genuine step forward at Sandown.

The squad is understood to have introduced a long-awaited engine upgrade package in the Waters/Stanaway and Mark Winterbottom/Dean Canto entries for the weekend.

A major effort was required to have the engine upgrades and several suspension items in place for a circuit where horsepower is at a premium.

“All the guys and girls at Prodrive have been working really hard trying to get our cars a little bit quicker,” explained Waters after his win.

“There was a massive push leading up to this weekend to get a few things in the car, they managed to do it and it is just great to reward everyone.

“It gives us a lot more confidence going to Bathurst, it is all about horsepower there and I think what we have done with the motors… we upgraded them and the cars were quite quick down the straights this weekend. That is really confidence inspiring for us to go to Bathurst with that. 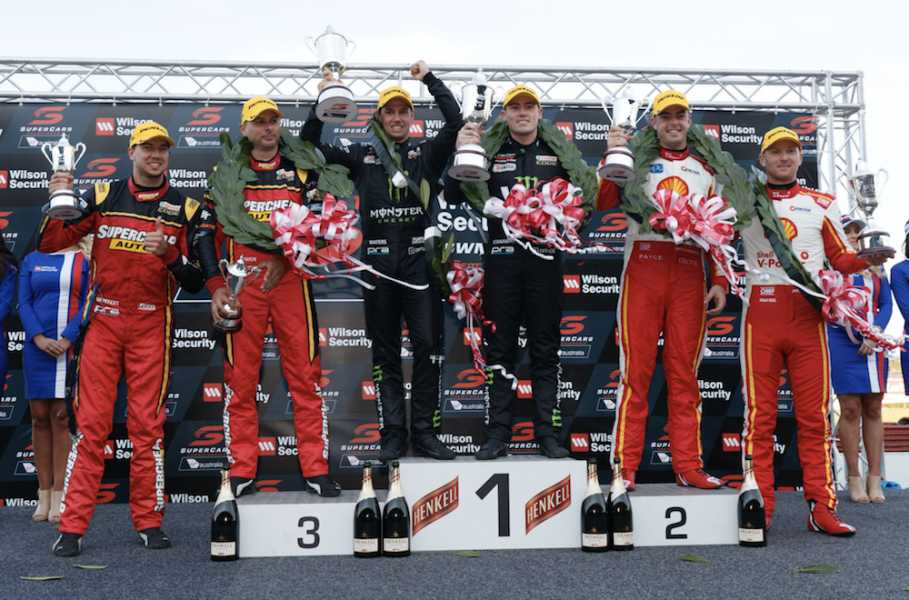 “In saying that, the cars were really good as well, it wasn’t just the engines, the engineering department have done an amazing job to make sure we have got quick cars and the engine shop has done a good job.

“I’m really confident going to Bathurst with a genuine shot to win.”

Adding to Prodrive’s joy on Sunday was a third place for Chaz Mostert and Steve Owen that kept the former well and truly in the title fight.

The result came despite Owen serving a five-second penalty at his first pitstop for contact with Luke Youlden that dropped the Supercheap entry down the top 10.

“I think as a team we have been working pretty hard,” said Mostert of Prodrive’s form.

“We have had some lows this year, you know a little bit at Winton with mechanical failure (gearbox) and then at Darwin we struggled for pace.

“I think we have been putting those bricks back together, getting more base set-ups with our cars."

Mostert also made reference to the engine upgrades, which are expected to be rolled out across all cars at Bathurst.

“Some of the boys rolled out some good stuff this weekend and found some gains, we are looking forward to getting those as well,” he said.

Mostert, who scored Prodrive’s two previous race wins this season, moved past Shane van Gisbergen on Sunday to be fourth in points after Sandown, 282 behind McLaughlin.

Winterbottom remains sixth having finished 10th in a difficult Sandown 500 that included an opening lap spin for co-driver Canto after contact with Jack Perkins.

Chaz Mostert  ›
2017 DVS Prodrive Racing Australia ›
Stay In The Know
Sign up to the Virgin Australia Supercars Championship Newsletter
This website uses cookies to improve your user experience. By continuing, you will be providing your consent to our use of cookies.Ok