Van Gisbergen, who claimed the lead from Waters on lap 5, tried in vain to overhaul Waters in a 15-lap dash to the end.

It marked a second win in as many days in Townsville for Waters, who claimed the Race 17 win on Saturday.

Starting from ARMOR ALL Pole Position, Waters won the long race to Turn 2, with Anton De Pasquale dropping from third to fifth.

It helped Will Davison and Todd Hazelwood into third and fourth, with van Gisbergen slotting in behind Waters.

Waters settled into a rhythm and opened up a one-second gap on van Gisbergen, who was being hounded by Davison.

However, van Gisbergen reeled Waters in and was 0.4s behind on lap 5.

At the end of the lap, van Gisbergen caught Waters napping and made a robust overtake for the lead at Turn 12.

For the third race running, Tim Slade pitted early and aimed to take advantage of an aggressive undercut. 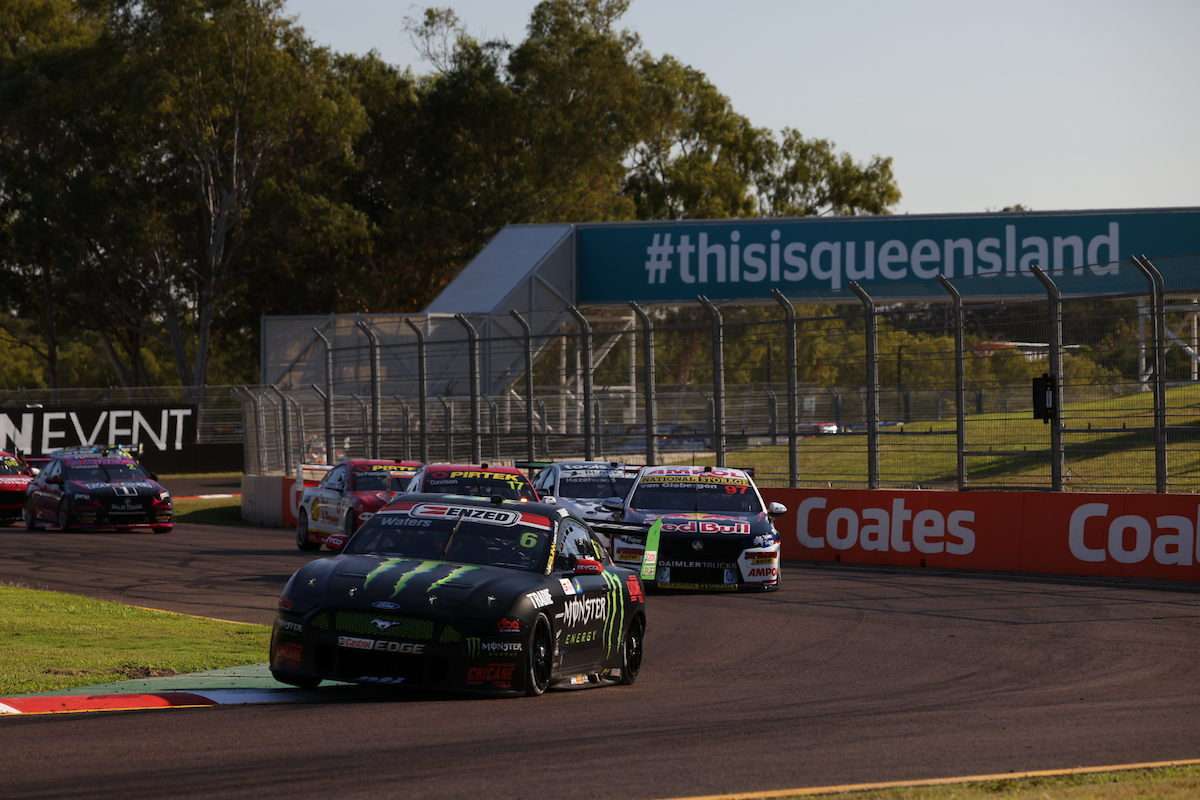 Van Gisbergen’s lead had been eked out to 1.8s by lap 8, with Hazelwood still the meat in a Shell V-Power Racing Team sandwich.

Jones stopped from eighth for four tyres on lap 9, and rejoined behind Slade.

Three laps later, Jamie Whincup, who had dropped three positions, followed David Reynolds into the lane and took on two tyres. Davison stopped for three tyres from third on the following lap.

All the while, Jones has closed the gap to Slade and harried the #3 CoolDrive Mustang.

On lap 18, Jones understeered into the Turn 10 wall and brought his damaged #96 Coca-Cola Commodore to a halt at the Turn 11 run-off.

For the first time in the Townsville doubleheader, the Safety Car was deployed, and van Gisbergen immediately pitted.

The series leader, as well as De Pasquale, took on three tyres and rejoined the race.

Critically, Waters, Hazelwood and Nick Percat were released and managed to jump the Safety Car before it left the lane.

It allowed Waters to stop and regain the lead ahead of Davison and van Gisbergen, with Reynolds, Hazelwood, Whincup, De Pasquale, Slade, James Courtney and Brodie Kostecki rounding out the top 10.

The race restarted on lap 24, with Davison shadowing Waters.

However, Davison bowled a wide at Turn 6 and ran long at Turn 7, allowing van Gisbergen to move into second through Turn 10.

From there, the race became a breathless run to the flag; van Gisbergen caught Waters, and pushed the Tickford driver all the way.

Corner by corner, lap by lap, Waters was forced to defend from a rampaging van Gisbergen, who was eyeing a 12th victory of the season.

Their enthralling battle brought Davison back into the fight, with the top three covered by 1.2 heading into the final lap.

Waters held on by less than a second to claim a second win in as many days, third of 2021 and fifth of his career.

Van Gisbergen extended his series lead over Whincup, with Davison claiming his first podium since Race 14 in Darwin.

“We had a pretty good race car, we were kinda hanging onto Shane in that first stint,” Waters said.

“Obviously came out in front of him and was pushing as quick as I could.

“We had a mega battle with him, it was really cool. Awesome to get one on him and win that race.

“I had a few more [tricks] up my sleeve… it’s awesome racing Shane, he’s so good at racecraft and racing people.

“There’s always a bit of respect there. We were side by side into Turn 2, and giving each other the shakas, and having a bit of fun with it.”