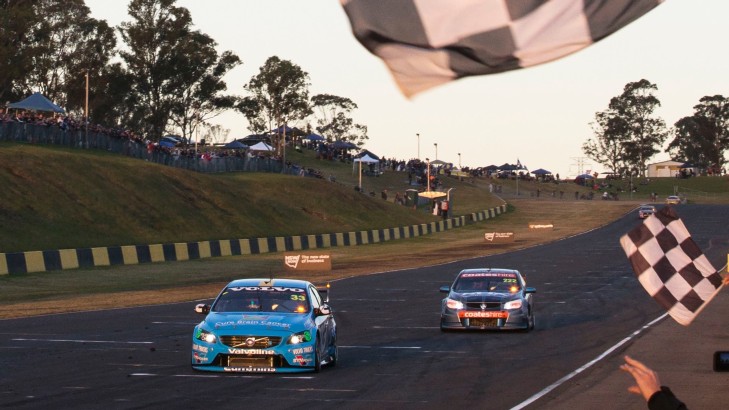 Volvo will focus on boosting the performance of its two S60 V8 Supercars in 2015 rather than boosting its representation on the grid.

"We are starting to settle down on next year," Crabb said at Bathurst. "It will be a solid two cars next year."

The decision means there is no opportunity for Erebus Motorsport V8 to become a Volvo-supported team.

Instead, it seems likely Betty Klimenko's operation will complete a new deal with AMG Customer Sports to run Mercedes-Benz E63 AMGs for Will Davison and Lee Holdsworth, despite the much publicised challenges that relationship has encountered over the last two seasons.

Dahl said there was no point expanding beyond two cars until the S60 was an even more competitive proposition.

"Personally for me I don't think you can have a big gain from more cars until you are competitive enough to win the championship," he said. "If you look all over the season both Garry Rogers Motorsport and Polestar have areas to improve.

"I think it is better to focus on the speed and when you have the speed to win the championship then you can buy insurance with more cars.

"But you don't go any quicker just because you have more cars. You have to have the speed first."

Dahl said Volvo's first season in V8 Supercars had laid the ground work for a strong championship challenge in the future.

Volvo's performance partner has direct responsibility for the development of the racing version of the B844S engine, which has proved competitive from the start of the season. Star driver Scott McLaughlin has won two races in Volvo's debut season.

While Dahl confirmed the engine was close to the category power ceiling, he revealed there was still development work to be done.

"You can always work with driveability and reliability and also the fuel economy," he said. "You can never be too good on fuel economy and I think we are not ahead of the game there. I think we still have some work to do so we will keep pushing on that one.

"For next year we must be there with them (on fuel economy). That is definitely one of the big targets on the powertrain next year to give the team a better chance on the strategy."

But Dahl also made it clear that performance improvements would have to come not only from the powertrain but from the entire operation.

He cited the performance of multiple championship and Bathurst winners Triple Eight Race Engineering as the target Volvo Polestar Racing must aim for.

"If you want to go for the championship it's not just the outright speed of the car; it's developments during the winter (summer in Australia), rebuilds between the races, how much you can do in the races.

"It's a fantastic goal to pursue the performance of Triple Eight... For everyone to have that confidence you have to have everything in place; not just a quick car on the track, but it's also a lot behind the scenes."

Both Dahl and Crabb shied away from commenting on the future of Robert Dahlgren, the Swedish import who has struggled in car #34 this year.

"It is not a Polestar decision," Dahl said. "It's a decision for Garry Rogers Motorsport and Volvo."

Dahlgren has confirmed to v8supercars.com.au that he will definitely race for Volvo in 2015, but does not know whether it will be here or in Europe.

Meanwhile, Crabb hinted strongly that the team's funding base would be boosted by stronger sponsorship next year. Valvoline has been the primary sponsor in 2014, but Wilson Security has been linked with the team for 2015.

"Success breeds success," said Crabb. "There are a lot of people talking to us. It's inevitable, the car is fast and everyone can see the potential in it.

"There are sponsors who want to move and people coming in from the outside."